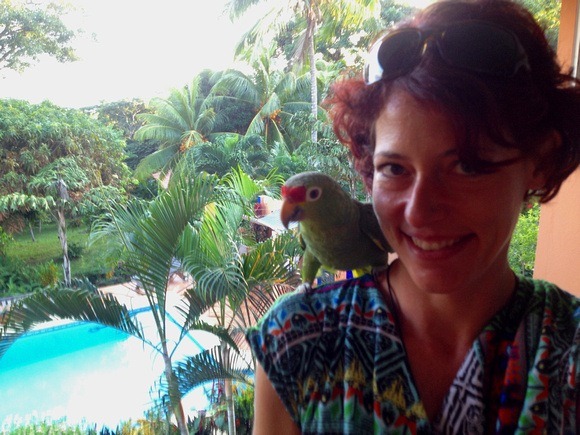 2014 was a year of many (many) changes for me. Although you’ll see that I spent a good chunk of the year in Peru (over a couple of visits), I did quite a bit of country-hopping (and hopping within countries).

All in all I covered over 34,000 miles, and seven countries. Please enjoy this 2014 travel summary!

After saying goodbye to a hellish year in 2013, I greeted 2014 near Panama City, where I was house-sitting. I stayed on through mid-January continuing to discover this country of contrast (See also: Panama: A Wild West), before flying to Hollywood Florida to visit a long-time friend.

For a couple of weeks we had a great time catching up, however I was craving some personal space, so I left to indulge in some alone time in Gulfport Florida.

The first week or so of February I explored the very pretty town of Gulfport before hopping over to Santa Rosa Beach (Florida) to stay the rest of the month with another long-time friend.

Santa Rosa Beach is one of the most consistent places I’ve visited in all of my full-time travels (having visited the last three years running), and although the weather was cold, the company of my friends was warm and fun.

A series of very serendipitous events led me from Florida to Peru in March. But in order to get there, I flew up to Toronto for a few days, not only to say a quick hello to my family and friends, but also to catch a mystery shopping flight to Peru, which saved me 50% on the cost of airfare.

April saw me settling into my digs in Peru and discovering the magic of the Sacred Valley. I started off with a five day trek through the Andes ending up in Machu Picchu.

I also got to know the little town of Pisac where I was living, and explored some of the prevalent spiritual opportunities which included receiving the rites of the Munay Ki.

My exploration of Peru continued through May with more Andean treks including the high Andean lakes of Kinsa Cocha, the ancient agricultural lab (or alien landing pad?) of Moray, and the incredible salt mines of Maras.

I also got a strange email from a reader who wanted to move in with me, and I started to learn about plant medicines in Peru such as San Pedro and Ayahuasca.

After doing one last three-day trek through the mountains to Lares Hot Springs, and making a quick stop in Lima to overdose on ceviche, I left Peru to enjoy summer in the northern hemisphere. Having been on a permanent mission to avoid winter for the last eight years, I’m accustomed to hopping hemispheres according to season (or sticking close to the equator).

For July and part of August, I based my operations in Toronto while visiting family and friends.

I made a quick trip to the Florida Keys where I discovered the magic of Key West and met all kinds of people who visited the Keys and never left.

On my return to Canada, I spent a couple of weeks with my Mum in the cottage country area of Muskoka; a very special place for me with a lifetime of memories.

In August I decided to “pop” over to Europe (via Istanbul) to visit some friends on the south coast of Spain. Having been to Spain many times, I was least impressed with the Costa del Sol, but I nevertheless appreciated spending time with my friends and exploring new places, including Gibraltar.

I capped off my European adventures with a visit to another friend in Pesaro Italy, where I was treated to amazing local hospitality and culture, and home-cooked food so good that I will never look at Italian food (outside of Italy) the same way again. (See also: Living Like a Local in Italy)

After spending my end-of-August birthday with my family and friends in Canada, I returned to a place that resonated me as a new home: Peru (See also: I’m Going Back to Peru: Here’s Why). After a hectic summer travel itinerary, I spent most of September relaxing and settling back into my Peruvian digs. I did get out of the house a few times though(!), including a trip to the Barratio market in Cusco.

I branched out a little more in October, attending a Peruvian wedding, and also making an attempted climb up mount Pachatusan, which ended very differently – but possibly more rewardingly – than I could possibly have imagined.

October also marked the end of a very long battle with lawyers and insurance companies in the aftermath of a near-fatal accident I suffered in Grenada in February 2013. I lost the battle, but in so doing I won my life back. (See also: Cutting Your Losses: Why I’m Losing, in Order to Win)

In November I continued to do work with the various plant medicines of Peru, I did a beautiful walk from Cusco to the ancient ruins of Huchuy Qosqo, and I kept working hard on becoming fluent in Spanish.

I also started planning a two-month trip to escape the rainy season in Peru (January through March), and although my intention was to visit Australia and New Zealand with a frequent flyer mile ticket, I ended up spending $1700 on absolutely nothing – not even flights. But I got over that pretty quickly, when I realized there were even better travel opportunities around the next corner – which you’ll learn about soon.

I laid relatively low in December, partly because my purse was stolen in Cusco, leaving me without any money (other than what I could borrow from friends, which I limited to necessities only). Although I learned a lot from the incident, it wasn’t nearly as painful as I thought it might be, and in fact, I saw more blessings than curses come of it.

December marks eight years since I sold everything I owned in Canada and started my full-time travel adventures, and I spent some time reflecting on this amazing journey that has allowed me to live and travel through over 50 countries. If you’d have asked me 10 years ago where I would be now, my wildest imagination wouldn’t have placed me in the Sacred Valley of Peru with the repertoire of experiences (good, bad, and otherwise) that I now have.

And life continues to change and evolve; with a home base in Peru (at least for now), I’m changing the way I travel and how I work. I have some local focuses here in Peru that are taking more of my time in an incredibly satisfying way; things that I will write about more soon enough, when I find the right words.

Happy Holiday Season, and here’s to an amazing year in 2015!