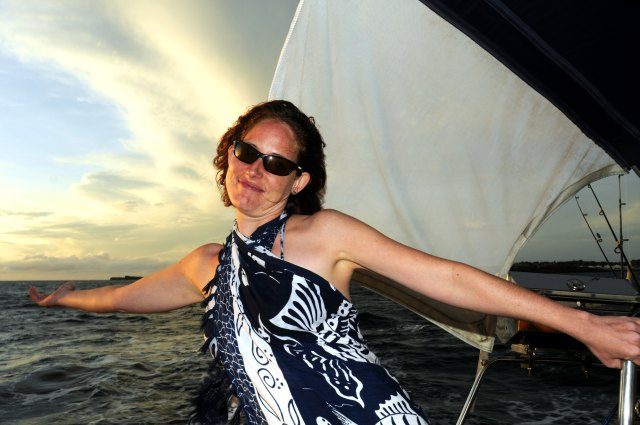 I’ve been in discussion with people here in Grenada about their meaning of Christmas, and it seems to boil down to harmony, company, and the spirit of joy throughout the holiday season more so than a specific day of celebration.

This year, I’m going with the flow, which seems to be a Grenadian way of life.

One of the reasons why love this time of year because I always take the time to reflect on the year past.

In so doing I’ve put together an annual video holiday card of sorts (here’s my card from 2010), so you can come along on my journey of 2011, which traversed 13 countries and involved over 73,000kms of travel.

It was a busy year.

My plans for 2012 are vague for now. I’ll be back in Grenada for sure by the end of March for another few months of beautiful house-sitting. Between January and March I haven’t solidified my plans, but am toying with options like cruising the Caribbean islands on a sailboat, learning salsa in Cuba, and doing yoga in the Bahamas.

I started the year in New Zealand at Mana Retreat (a favourite haunt of mine for volunteering), where I enjoyed much contemplation, jubilation, and meditation.

I also traveled around the North Island a bit, checking out the bays, beaches, volcanoes, caves, and even performing a few songs at an Auckland cafe.

After 6 months it was time to move on, and return to my home town of Toronto for a visit – something I usually do every two years, and always in the summer if I can help it!

The city had changed a bit since I was last there two years ago, and I found myself occasionally not recognizing major intersections because they had changed so dramatically.

But the people were awesome as ever, the weather was fantastic, and I even got a chance to enjoy a few weeks of respite in cottage country with some family.

I also took on the No Baggage Challenge this summer, and made a few trips without any bags at all, using Scottevest travel clothing with lots of pockets.

My first trip was a flight to Florida to visit an old friend.

My second No Baggage Challenge trip was to visit Quebec City; a beautiful part of Canada that has the feel and look of a European city. I enjoyed the summer festival and stayed with some good friends.

All of a sudden it was August and I was saying “see ya next time” to my family and friends.

I hopped over to Sweden to explore and spend time with a Swedish friend and his family. I caught some of the action of the city-wide Kultur festival in Stockholm, before heading north to Ornskoldsvik – the town with a giant ski-jump in the middle – to stay with my friend’s family.

I also tried my hand at a number of Swedish foods, including the Swedish delicacy of Surstromming, which is fermented fish – a “love it or hate it” sort of food with a world-renowned smell. (Here’s a video recount of the event – which has over 100,000 views!).

With only two weeks in Sweden I’d have liked to stay longer, but September called, as did the Ultimate Train Challenge.

This was a collaboration with fellow travelers and bloggers Michael Hodson and Jeannie Mark to travel from Lisbon to Saigon – all by train – in 30 days. (Good thing I love international train travel).

With about 25,000kms to traverse, the month was fast and furious (29 trains in 30 days), but I did get a few chances to get off the train to visit friends and explore.

My first stop was Granada, in the south of Spain.

Then it was up to Barcelona for a quick stop….

Before heading on to Zurich – and even talking my way into the engine car enroute.

Prague was my next stop,

Before hopping over to Lviv, in the Ukraine.

By this point I was already exhausted and still had a long way to go, so I refreshed myself with a quick camping trip in the Carpathian mountains – just what the doctor ordered.

Then it was a few more nights on trains over to Moscow to reunite with Michael and Jeannie, who I hadn’t seen since Lisbon.

Together we hopped aboard the Trans-Manchurian train to experience the world’s longest railway – from Moscow to Beijing. What can I say about this epic week-long journey? I pretty much say it all here.

Reaching Beijing one week later was a victory, we were still only 2/3 of the way through our journey and the clock was ticking. There’s no rest for the wicked – so we headed straight for the Great Wall of China: a place I first visited 18 years ago on my first-ever overseas trip, which brought up some amazing memories.

Hot on the heels of the world’s longest train ride, we took the world’s fastest train ride from Beijing to Shanghai, before moving straight on to Guilin, also brought up many memories of my first trip to China.

One final leg remained on the Ultimate Train Challenge: the massive journey from Guilin to Nanning to Hanoi, and on to Saigon. Fatigue aside, this four day trip (namely the train from Hanoi to Saigon) earned a spot among my favourite train trips, with beautiful changing views, warm weather, good company, and lots of characters along the way.

And celebrating for 10 days in Saigon was the ultimate way to conclude the Ultimate Train Challenge. In addition to getting almost-daily massages and catching up on work, I managed to experience Saigon motorcycle traffic from the inside with a culinary tour led on motorcycle, as well as simply drink in the culture and beauty in the randomness.

With so much packed into the last few months, I was reeling, and it was time to take it down a notch again, to my preferred travel pace of staying at least a few months and “living” at various destinations.

So my last stop for the year was the Caribbean island of Grenada, to house-sit for three months. Despite a rocky start (complete with dengue fever and heartbreak) I’ve grown to love this island nation – its people, nature, and the way of life – and I still feel Grenada has a lot more to show me.

So I look forward to returning for more house-sitting in late-March 2012.

What Travel – and the Holidays – are About for Me

For me, celebrating and giving thanks for those experiences is the spirit of the holidays.

I’ve always known celebrations on the last day of the year (December 31st) to be called New Year’s Eve.

In Grenada, it is called Old Year’s Night.

I think I like that term even better: celebrating the year past and allowing tomorrow to come with its own ocean of experiences – as it always does.