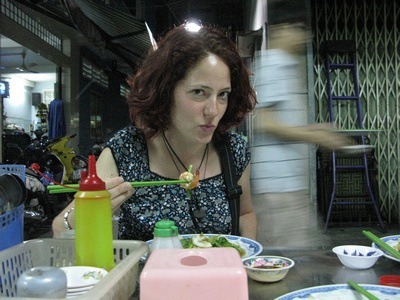 Vietnam food culture: As a long-time fan of Vietnamese food, I was excited for “the real deal” long before I arrived in Vietnam. This excitement was further fuelled by a lacklustre culinary experience on the Trans-Manchurian train, then taunted and teased with the culinary delights of China.

By the time I reached Vietnam, I was almost uncontrollable. I wanted to eat everything!

Here’s what I learned while trolling the streets for the best eats and insights into Vietnam food culture:

After drinking too much instant coffee for my liking on the Trans-Manchurian, I was primed and ready for Vietnam food culture’s superstar: their legendary coffee – reputedly some of the best in the world.

Even the way it’s brewed is unique and charming – metal contraptions slowly filter the coffee into a glass which sits in a bowl of cool water (to prevent breakage I presume). And the finishing touch of a dollop of sweetened condensed milk for stirring through makes this thick delicious velvety coffee to die for. But you won’t die at the cost; at a street vendor it will run you about 7,000 Vietnamese Dong (35 cents).

Even without “milk”, the coffee is strong, somewhat sweet, and inexplicably chocolaty. I bought some Vietnamese coffee and a little coffee filter to take onwards to Grenada, and although it’s a close replication it’s not quite the same. Not surprisingly, there’s an ingredient or technique I missed along the way. Maybe the secret is in the ambiance; siting on a miniature chair on the sidewalk, watching a river of bikes go past as you sip your coffee in relative peace.

You don’t have to walk far on Saigon’s uneven chaotic bike-strewn sidewalks before encountering a street food vendor. Depending on the time of day, the items on offer vary, from soups to rice and fish/meat/veggies, to noodles, to sweets, corn, steamed buns, BBQ, coffee, drinks – you name it.

In my experience, the best places to get street food were the alleyways. Dart down a nondescript alley, and a host of impromptu restaurants and vendors reveal themselves. Treat yourself to the many delights within. Ignore the confused looks of many locals, who assume you’re lost. I had some of the funniest charade-based “lessons” on how to order and eat food in these places!

The most I ever paid for a street food meal was 35,000 dong ($1.70) for a delicious shrimp and squid veggie stir-fry served on a bed of flat rice noodles.

The best meal (I went back four times) was a breakfast of rice noodle crepes filled with vegetables and meat, topped off with bean sprouts, herbs, roasted garlic, and a sweet/spicy fish sauce you pour over the whole thing.

An expat friend of mine cites Vietnam’s street food scene as intrinsic to their culture. “I love the fact that somebody who makes a good soup can open up a stall on the street corner and sell it to anybody passing by. It’s so enterprising,” he says. He hopes that it never gets formally regulated, going the way of Singapore’s organized hawker stalls (which resemble food courts).

Almost immediately on arrival to Vietnam, I broke my golden rule of eating fruit and vegetables in developing countries: If you can’t boil it or peel it, don’t eat it! Instead, I (at first nervously, and eventually with abandon) found myself eating all manner of fresh food, drinking water (though reputedly not tap water), and even ice (which again, is apparently purified).

See also: Dealing With Parasites – A Guide to Clean Water Around the World

I’m still here and I didn’t have one bout of intestinal distress; so I figure it all went okay.

But shopping at a local market the day before I left made me think hard about everything I’d ingested in the week and a half prior.

Fish was sold out of plastic bowls on the ground, where they were kept alive in water. I watched an eel make a slippery escape and slither along the muddy pavement we were walking on before being caught, gutted, and chucked in a plastic bag for a customer – right there on the pavement.

Although much of the fish was kept on ice, meat apparently didn’t need the same attention to refrigeration. Instead freshly plucked chickens sat next to live ones out in the heat, waiting for a customer to come along so the vendor could butcher it – again right on the pavement.

I reconsidered all those fresh veggies I had, veggies that were sitting in what my North American background would suggest was the “filth” of this local market. I tried to convince myself that the food I’d eaten in stalls and restaurants was different, but I knew it all came from the same place – bustling outdoor markets like this one.

My constitution was further challenged when the local friends I was shopping with then prepared all this food (2 kinds of meat, 3 kinds of fish, and veggie skewers galore) for a BBQ event. But the food that was served bore no resemblance to what I had seen in the market that morning. It looked straight out of a magazine (the friend in question was a chef), and I forgot about what I had seen that morning in relishing one of the best meals I had in Vietnam.

I realized that North American culture has sterilized everything beyond reprieve. Many of us grow up with the concept that meat comes from styrofoam packages in the chilled aisle of a grocery store – not a farm full of animals. Produce is highly polished or waxed and balanced in pretty pyramids. What would we do if the supermarket started butchering live animals right in front of us? Arguably we should pay a premium for it, since it would be fresher than anything we normally get. But instead we’d likely be horrified, so it’s not done. So we eat meat that is days if not weeks (even months?) old.

In Vietnam, food – in every sense – is much more basic. Unapologetically honest, cooked and served with different “hygienic” standards entirely. But more people in the world live and eat like this than the sterilized supermarket cultures of western society do. Even in Europe, I’ve been to outdoor markets selling freshly caught/butchered/made fish, meat, and cheese – which has been sitting in the sun in 30+ degrees.

This lesson in food culture was quite enlightening, and gave me a deeper respect for the food I eat – everywhere in the world.

And some later adventures in Vietnam, eight years later:

6 Weeks in Hoi In, Vietnam