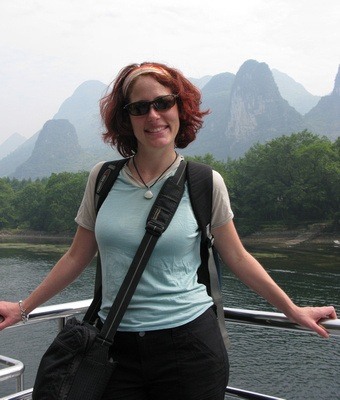 When I was last in China (18 years ago – eek!), my ballet tour took me to six cities. But by far, my fondest memories were of Beijing and Guilin.

So it is a blessing that these are the two places I get to revisit (or rather, breeze through) on my return to China as part of the Ultimate Train Challenge.

We’re all very grateful for the two whole nights we get to sleep in stationary beds at How Hostel – I realize with slight horror that the last time I stayed this long anywhere was in Zurich, which feels like lifetimes ago.

With two rivers meeting near the centre, Guilin is a very water-centric city. And if you can hack it, the best time of day to experience Guilin’s river culture is early in the morning; the earlier the better.

My first morning in Guilin I witness this phenomenon around 8am. An elderly woman (she must be in her 60s or 70s) has her leg propped up on a bridge and is stretching her hamstrings as part of her morning exercises. She is so flexible, she’s actually overextended the splits – and she makes it look like nothing (can everybody in Guilin do the splits? I wonder).

Further down, a group of ballroom dancers are waltzing in the user-friendly park space that lines the riverside.

Next group another 100 metres away is a tai chi session with about 10 people practicing.

Then, a group of costumed women with drums, apparently rehearsing for a performance.

Following, some sort of meditative dancers with flags.

There are periodic public exercise “playgrounds”, but instead of slides and monkey bars for children, the playground-esque equipment is comprised of stationery bicycles, rowers, and cross-country ski contraptions commonly seen in home gyms.

Between all these groups practicing different modalities of exercise and meditation are dozens (hundreds?) of pilgrims; power-walkers to wanderers, many exaggeratedly swinging their arms or hitting their shoulders or other pressure points in what I surmise is an eastern practice for total body health maintenance.

And amazingly despite the murky colour of the water, there are even people – many people – swimming in the river (either doing “laps” across and back, or swimming along the length of the river) alongside motorboats and bamboo rafts.

The following morning I’m out before the sun has even fully risen, admittedly not so much for exercise as a quest to enjoy one last bowl of Guilin’s famous rice noodles for breakfast before catching a 7:30am train.

But walking through the park enroute to breakfast is a magical experience. The entourage of scooter/motorcycle traffic hasn’t begun for the day, which creates a subdued – almost muted – ambience. Quite a few people are out to enjoy the early morning peace along with me; a dozen people practicing tai chi, two women out for a morning stroll, and lots of individual arm-swinging pressure-point-pounding power walkers and tai chi gurus.

The water surrounding us, with Guilin’s famous and unique mountain landscape as a backdrop is a perfect setting for these early morning meditations. What a way to start the day.

With such a water-centric culture, it stands to reason that one of the biggest tourist attractions for Guilin are the river cruises along the Li River.

This is one of the experiences I most fondly recall of my visit to China in 1993. Cruising along the quiet Li River with its clear water and stunning scenery was a peaceful afternoon that left me feeling like I’d “discovered” an untouched and very special part of China.

Imagine my surprise 18 years later when I realize the rest of the world has caught on to cruising this “untouched” and special part of China..

This time around, it’s very much “touched”.

Our Guilin guide Sherry (of China Odyssey Tours) leads us through the fray to our boat, which heads out to cruise along this 83km stretch of the Li River in an assembly line fashion. Every picture along the length of the twisting river in either direction includes at least three identical river boats.

18 years ago, I remember a man on a bamboo raft pulling up and tethering to the boat. He had a basket of fruit and offered his wares for sale to the passengers. I found this unique, charming, ingenious, and fascinating.

Today, the man on the bamboo raft is still there (along with dozens of other bamboo rafts). But in addition to selling fruit, he also sells pop, and even souvenirs of little men on bamboo rafts selling stuff to passengers on river cruise ships. I kid you not.

Initially my stomach turns at the exploitative nature of this river cruise and how “touristy” it has become. I long for the feeling of being “off the beaten path” that I had before, oh so many years ago.

But as the hours pass and as I aim my camera out at the (still stunning) mountain scenery instead of the other tourists and boats, I realize the views are still the same. The unique mountains with imaginative names and tales of folklore are still there, and just as majestic as before.

There’s a reason so many people have caught on to the river cruises of Guilin. It’s an amazing experience. And there’s no reason why I should be the only person to know it.

“So do you like bicycles?” Sherry asks us. Jeannie and I eye each other, having seen the bicycle tour listed on our itinerary and feeling nervous about our respective injuries that prevent us from riding very well.

“Um, they’re okay…” we reply, not sure how to navigate the second part of our tour planned for the day.

“How long do you think you can ride?”

I’m grateful for this question, since I’m not averse to riding, but have no ability to do it for more than very short distances. “No more than half an hour,” I reply.

Sherry’s eyes widen and I detect a note of panic. “Really? That’s all?”

I go on to describe my chronic hip injury, and Jeannie nods, chiming in with her bum knee.

Sherry takes this information in stride and immediately adjusts our plans for the day by instead taking us on a ride in an open-air golf cart through the countryside. We appreciate the customizable nature of the tours we’ve received throughout China with China Odyssey Tours, and the ease with which we’ve been able to travel through China in our almost-delusional state of travel-exhaustion.

Sadly, that’s it for our time in China. Our itinerary presses us ever onwards towards Saigon. Traveling about 25,000kms in 30 days by train requires constant movement; movement that now has us feeling dizzy, confusing events and locations, and largely unaware of what day it is or even what time it is.

But the end is now in sight; we have six hours by train to Nanning (where we get a chance to walk around for a few hours), followed by 12 hours to Hanoi (which sadly entails getting off the train twice in the middle of the night for border formalities). After a day in Hanoi, our final train (36 hours) delivers us to our ultimate destination of Saigon. Despite the fact that this last portion of schedule actually equates to half of the epic Trans-Manchurian train, at this stage it feels like a drop in the bucket; we can do this in our sleep. And in fact we will – three nights’ sleep.

Check out this video of my Guilin experience, from peaceful tai-chi filled mornings to the chaotic (yet beautiful) river tour!