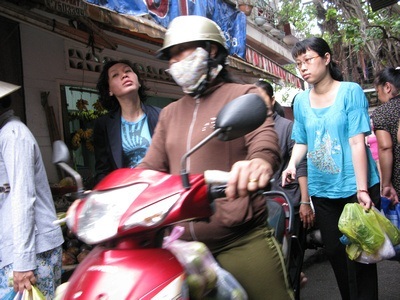 The bike culture in Saigon (and to a larger extent, the whole of Vietnam) is immediately evident on arrival. From pedal bikes, to electric bikes, to scooters, to motorcycles and other incantations thereof, two wheels is the (vastly) preferred mode of transportation. This manifests itself in a number of ways, as listed below. But of prime concern to any newbie to the area is (understandably): how to cross the street in Saigon! Don’t worry, I’ll tell you how.

But first, enjoy this short little teaser video of what it is to ride a motorcycle in Saigon!

Click here to watch this action-packed view of motorcycle traffic in Saigon as seen from the back of a bike!

My first lesson in Vietnam pedestrian culture was that there aren’t really any pedestrians. Since just about everybody has a bike, there’s little reason to walk more than a few blocks. So my preferred method of exploring (being walking) was looked on bemusedly by others.

And I can only imagine how strange I looked as the “token white person” in my area out for a walk; with more broken pavement, bikes, planters, street food stalls, and other obstacles than actual pavement, walking on the “sidewalks” was more of an “off-road” exercise.

Bikes are Parked in the Strangest Places

There are a lot of bikes in Saigon. A lot. The sheer number and concentration is almost incomprehensible. And although sidewalks are glorified parking lots for bikes, it’s still not quite enough space. Many businesses also double as bike parking.

For example, the bubble tea place I regularly frequented consisted solely of a small counter at the front. The back of the establishment was home to about two dozen bikes, which regularly came whizzing in and out through the front of the store, bubble-tea-customers be damned.

How to Cross the Road in Saigon: Take a Leap of Faith

The biggest test of Saigon comfort (this also extends to the rest of Vietnam, but as the country’s largest city Saigon is an exaggerated example) is how easily you cross the road. With a never-ending river of bikes traveling in both directions (some periodically – nay, frequently – going the wrong way), how to cross the road in Saigon involves simply launching yourself into the fray and trusting that you won’t die.

Admittedly there is a little more science to crossing the road than that; the mantra is “avoid the cars, and the bikes will avoid you”. Cars and buses take precedence on the roads, and pedestrians are wise not to test that theory or they’ll get honked at (at best; run over at worst). Beyond that, walk slowly and predictably, and the bikes miraculously move around you.

The key is in being predictable. Walking one day with Jeannie, we got halfway across the road before we realized we needed to double back. Jeannie wheeled around without a thought, and had I not caught her and held her back, she’d have been Saigon’s next bike-pedestrian casualty. Bikes will avoid you, but do something unpredictable and all bets are off.

How to Take a Bike Taxi in Saigon

At just about every street corner (and often in between) are people sitting on bikes. Sitting, lying down, plucking the hairs on their faces (seriously – I saw it more than I’d care to), eating meals, whatever. Just hanging out on their bikes. For the longest time I couldn’t tell why they’d choose to spend so much time balanced precariously on a parked bike (when they could be at home perhaps), until I learned that these people are motorcycle taxi drivers.

Approach anybody who’s hanging out on their bike, and you can negotiate a fare to wherever you want to go. In fact, try to walk past them, and they’ll likely call out to you and ask you if you want a ride. (Because, like I said earlier, people just don’t walk in most parts of Saigon; surely if you’re walking you must be looking for a ride).

You’ll See the Craziest Stuff on Bikes in Vietnam

You name it; if you look long enough you’ll find it on a bike. From loads as large as full-size refrigerators and huge lengths of rebar, to three generations of families, you’ll get it all – piled on one bike.