Tapas, Mountains, Flamenco, and Siestas: This is Granada! 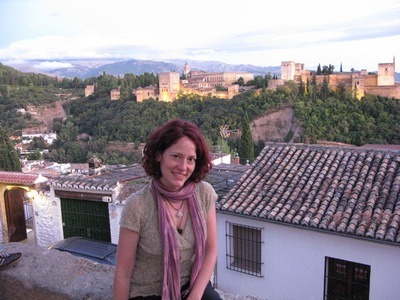 After leaving Lisbon, my Ultimate Train Challenge adventures in Spain were to start with breakfast in Madrid, lunch in Seville, and dinner in Granada. In theory, it all sounded very civilized until I was caught in a vicious downpour in Seville with no raincoat, a good 20 minutes from the train station.

So what’s a girl to do? Why, stop in the nearest cafe for tapas, of course!

I’d have walked by this place a million times had it been sunny, so given the glorious tapas I enjoyed while pouring through maps to determine my train route through Europe, I’m glad it was raining.

I received a warm welcome from Nellie of Wild Junket and her husband Alberto, who hosted me for my three glorious days in southern Spain. We later determined that we’ve known each other online since early 2008 when she lived in Singapore – my, how time flies. What a joy it is to now know them in person and count them as friends.

Our first night was a whirlwind tour of tapas and the charming town of Granada, complete with its steep narrow cobblestone streets, Moroccan tea shops, and the gorgeous Alhambra. (I couldn’t help but perpetually giggle at the thought of being in front of Alhambra, as Alhambra is also a board game I love to play, similar to Carcassonne – a game I’ve played and a place I visited last year when my Mum joined me on a vacation in France.

Imagining southern Spain, somehow I constructed a picture in my mind that was devoid of elevation. So when the train pulled into Granada – which is surrounded by mountains – I was both surprised and pleased, since mountain hiking is one of my favourite activities.

Although some would say the birthplace of Flamenco in Spain is Seville, Alberto (a Grenada native) got a strange look on his face when I suggested that was the case. I imagine there’s some debate among Spaniards about the true home of Flamenco dancing; a beautiful passionate art that has a life of its own. I would love to try my hand at Flamenco…maybe when I return to Spain (whenever that will be).

Since Flamenco shows are available in “caves” (both touristy and out of the way) throughout and around Granada, and given my love of dancing, it couldn’t be missed.

Given the early-ish dinners I had in Sweden (and even Lisbon), the switch to “Spanish time” required an adjustment. Eating before 10pm isn’t commonly done, and it was only on my departure from Spain that I had finally started to relax into this groove, which – of course – includes siestas (afternoon naps).

As we drove through beautifully precarious mountain towns on our way home from our hike (and enroute to a siesta before dinner), I wondered why the towns were deserted. With shutters on all the windows and almost nobody to be seen, it looked like nobody lived there. I surmised that these towns were mainly comprised of holiday homes.

But even populated areas of Granada were quiet and empty in the late afternoon. That’s when I understood the extent to which siestas really are a part of Spanish culture. The window shutters aren’t for storm protection when leaving a place for an extended period of time (as you see with many holiday homes) – they’re to shut the light out for a proper siesta!

I even noticed when we returned home that our own shutters were perpetually half closed, yet still allowing lots of natural light to fill the place. Is a very uninviting look from the outside, but a downright necessity from the inside.

And lucky for me, I managed to bag another Scavenger Hunt item: A photo of me enjoying dinner in somebody’s home!

Thank you Nellie and Alberto for your wonderful hospitality. Who knows where in the world we’ll meet next!

But alas, this visit will be (too) short, as I must move on to keep up with the Ultimate Train Challenge schedule! After Zurich, I’ll spend the weekend in Prague, then move on to the Ukraine for some Active Ukraine adventures.

But I’m getting ahead of myself. First stop: Zurich!

6 thoughts on “Tapas, Mountains, Flamenco, and Siestas: This is Granada!”