Carcassonne: More Than Just a Game 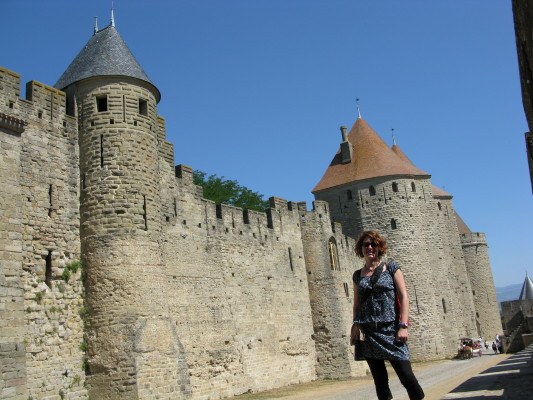 I must confess. One of the reasons I wanted to take a day trip to Carcassonne had very little to do with the place itself, or my knowledge of this medieval walled city with a formidable history and a place on the UNESCO World Heritage list.

No. It had to do with the fact that I love to play the board game called Carcassonne. If the game was that good, there had to be a reason why they named it Carcassonne, right? Surely, Carcassonne was cool.

Lucky for me, it was.

This article was originally published in 2010. It has since been updated for accuracy of links and formatting.

I’ve been to a few walled cities in Spain (namely Toledo and Segovia), and I love their charm and historical significance. Nowhere in North America would we see places with such beautiful old dwellings – that are still lived in and used no less. Most of Europe holds hundreds of years of history in commonplace sights and buildings, but walled cities (for me) take it to a new level.

Carcassonne in particular looks like a giant castle (with 53 towers and fortified double walls) perched atop a hill, surrounded by French vineyards. Just the drive in is stunning.

Although the last stages of fortification happened in the 1200’s, Carcassonne took its initial hold around 100 BC. (BC!) It has fallen under numerous rulers and regimes since then, and by the 1800’s it was all but forgotten and had fallen into quite some disrepair. In fact, it was the public uproar in response to a proposal to demolish the city in the mid 1800’s that actually helped transform Carcassonne into the place it is today (and quite inadvertently brought the game into existence a mere thousand or so years later).

So instead of being demolished and forever forgotten, it was restored and preserved as the historical monument that it is.

Besides the board game (did I say I love the game yet? Well, I do), Carcassonne is known to be a major filming site for Robin Hood: Prince of Thieves, and has wended its way into numerous works of literature and poetry.

Because I made only a short day-trip to Carcassonne, I didn’t have a chance to see it at night, which is apparently quite spectacular. June through August is also a hopping time, with active festivals and over 100 shows (almost 75 of which are free to attend).

So if I had it all to do over again, I might have tried to see a show and stay overnight. But with so much to see in Europe, I can’t possibly conquer it all. Instead, I am thankful for the time I had to wander this beautiful old city and soak in the ambience, and I’ll remember the trip every time I sit down to play the game!

5 thoughts on “Carcassonne: More Than Just a Game”