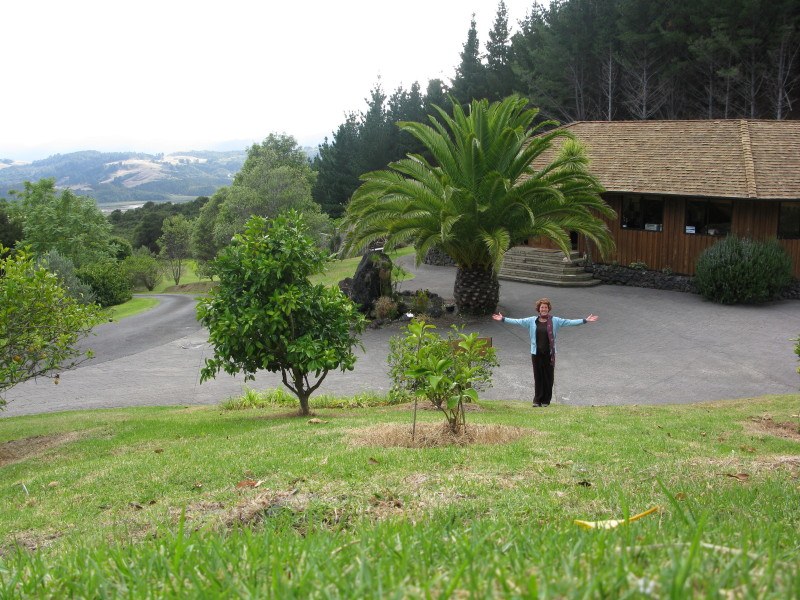 For the last month, I’ve been working in trade for my accommodation at a little piece of paradise in New Zealand: It’s called Mana Retreat. I’ve just left (ready for my next adventure), and I’m already working out how and when I will come back.

This post was originally published in 2010; it has since been updated for accuracy of links and content.
I cannot speak to the current volunteer program and how it operates; I am told that it has changed quite a bit.

It all started in Thailand, two years ago. While enjoying the companionship of some new friends from Canada, the age-old questions used by backpackers the world over came out: “So where’ve you been? What’s your favourite place in the world?” And so on…

I’ve heard this question answered time and time again, and most of the time the answers are quickly forgotten. But for some reason this time it stuck.

“Mana Retreat, in New Zealand,” came the immediate – and enthusiastic – response. He knew that I love to work in trade for accommodation around the world, which is what his visit to Mana entailed. “The work is awesome, the people rock, and the food…” his eyes glassed over, and it appeared that words couldn’t describe how good the food was. I seem to remember a little ribbon of drool running down his chin as he said something about gaining weight while he was there.

As soon as I fell in love with New Zealand and decided to kick off my solo travel adventures here, Mana Retreat Centre popped back into my consciousness. A quick internet search revealed that Mana is a mind-body-spiritual retreat on the Coromandel peninsula on the North Island of New Zealand. And – glory be – they have a work-exchange program.

I sent in an application and started a lively email conversation with the head coordinator of the WWOOFing program. Mana uses “WWOOF” (Worldwide Work on Organic Farms) as their main way of attracting the work-exchangers who make up a large portion of the retreat’s staff. Soon enough I was booked in to arrive just after Easter, and assuming the four-day mutual trial period went well, I’d stay for at least a month.

Since then it has been magic. The area is gorgeous, the property is spectacular, the people are beautiful, the work is fun, and the food….dribble dribble…

Mana Retreat is set on a gorgeous piece of hilly land (about 15 minutes south of the town of Coromandel), overlooking the ocean and at the foot of (and encompassing) the sacred Maori Mount Pukewhakataratara.

Yes, Pukewhakataratara. (Before you wonder how on earth it’s pronounced, it goes something like pook-eh-fa-ka-ta-ra-ta-ra. Except the “oo” in pook is pounounced like the “oo” in cook or book.)

Now say it five times, fast – and you’ll get the hang of it!

There are walking tracks through the bush that go up the mountain, down the valley, around waterfalls and swimming holes, and through groves of 400 year-old trees. Built almost seamlessly into the land are bush lodges and huts for guests, meditation platforms, hammocks, natural benches, organic gardens (which provide much of the cuisine enjoyed by the group), a teepee, a sweat lodge, a bush bath, a sauna…the list goes on. This is in addition to the main building, which has an octagonal room (with bay windows on five sides) for conferences/retreats/ classes/group functions, a large kitchen and dining room, a few rooms for guests, an office, and a library.

“Dinner is at six-thirty,” said Val, who was giving me a brief orientation on my arrival. “If you want to go for a walk before dinner, I suggest going up to the sanctuary. The Goddess path is the quickest way,” she said, while illustrating the route on a small map. “If you’re there for six o’clock, you can hear the bells, which are magical”.

Feeling both overwhelmed and enchanted, I took her advice and headed up the trail. The route was steep, but I was rewarded at every turn with a little goddess statue or an equally beautiful view of the sub-tropical rainforest overlooking the ocean.

Twenty sweaty minutes later I came upon a clearing, and discovered my destination: the Tara Sanctuary. It sits just below the peak of Mt. Pukewhakataratara, and overlooks the rest of the property, with the ocean beyond.

It quite literally took my breath away.

Tara Sanctuary itself is a non-denominational (or multi-denominational, depending on how you look at it) space that encourages contemplation, inspiration, and peace. The signs saying “silence” are almost unnecessary, as the feeling of awe transcends any need to speak. Should you choose to play music or sing inside the sanctuary (which is accepted, if not encouraged), the acoustics will send you into a trance. It’s almost unreal.

This is why Val suggested hanging around for the bells to chime; the bell tower is just beside the sanctuary, and the ten minute orchestra of bells reverberates off every wall in other-worldly ways.

Okay, Nora. Back to reality, before you think I’ve lost my marbles and am going to start chanting “Hare Krishna” or something (which I won’t). It’s just a gorgeous place with an incredibly peaceful harmonious energy – what can I say?!

So, on to the work at hand, because staying – and eating (we’ll get to that in a minute) – at Mana Retreat isn’t free.

As far as WWOOFing gigs go, the work requirements at Mana are at the upper end of what’s generally expected of those who work in trade for their accommodation. You work approximately six hours per day, five days per week. With breaks and lunch, the six hour day looks more like seven hours, and the days off are irregular, depending on when various groups are staying at Mana and how many staff are needed.

Despite the long hours, the work is relaxed and enjoyable.

Mana Retreat is a drug-free, alcohol-free, and vegetarian property. Although the first count isn’t a problem for most people, the second and third counts of no alcohol and no meat/seafood is a challenge for others, who when I described the place prior to coming, wondered what I was thinking.

And although I’m a self-confessed omnivore, the food here was so bloody good that I didn’t miss the meat.

Not a meal went by when I didn’t help myself to seconds (and sometimes thirds) of creative salads (deriving ingredients from the garden), yummy curries, soups, roast veggies, stews, and other concoctions that one of my fellow WWOOFers from Germany referred to as “hip gold”!

Breakfast is homemade muesli (and when I say muesli, I mean muesli!) and organic homemade yoghurt with fresh fruit, congee (rice porridge), and a selection of organic wholegrain breads. Lunch is the main meal and involves multiple salads and some lovely curry of sorts. And dinner is soup, more salads, and a dessert that truly is “hip gold”. (Especially after seconds).

An organic coffee and tea station kept me enjoying hot beverages all day, and I was usually still full from the last meal by the time I sat down to the next. I never succeeded in my self-challenge to make it through a whole day without taking second servings of something.

“Hip gold” is one of many interesting terms that came from endless conversation with people from so many different backgrounds. WWOOFers from all over the world congregate at Mana, adding greatly to the experience. During my stay, there was representation from Germany (four people, in fact), England (there’s a huge UK presence in New Zealand in general), Hawaii, France, Canada (that’s me!), and – of course – New Zealand.

With English being a second language for many of the WWOOFers, dinner-table conversation can be very interesting, with many inadvertent plays on words. Often, English-speakers are asked to define odd words that are used in the context of conversation; a task sometimes tougher than it seems. It took us a while to define “kinky” (without being explicit) so our French companion could understand!

Overall, Mana attracts people who love nature, travel the world, work in trade for accommodation, and are open to their own brand of spirituality and growth. Each morning at 8am, staffers who wish congregate in the library to hold hands and listen to the sanctuary’s bells tolling for 10 minutes. They then draw inspirational cards that provide a focus for the day and something to contemplate. Spirituality doesn’t have to be somber and serious either – we enjoyed many laughs in even the most reverent of situations.

So it is with an open heart and stronger sense of self that I bid adieu to Mana. But I believe that it’s only for now, as I – like so many of Mana’s WWOOFers do – plan to come back soon.

38 thoughts on “Living at Mana Retreat”