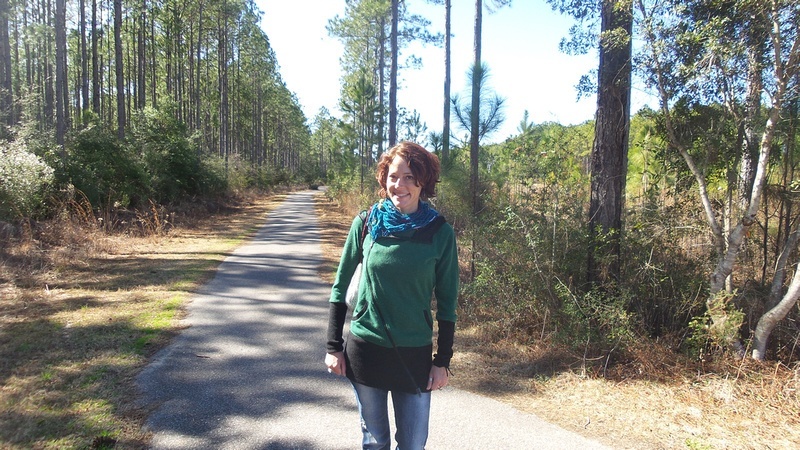 Just before I left Gulfport Florida, I was informed by my friend in Santa Rosa Beach on the Emerald Coast, that she had snow. Snow! In Florida! For a girl who has been on a permanent mission to avoid winter – successful thus far for seven years – this was not good news, given that I was visiting her next.

But North America has been hammered this winter by uncharacteristically cold, dramatic, and erratic weather. Given that I already had my feet on American soil, and that I dearly wanted to visit my friend, I took it in stride and got on the plane.

This is the third year running that I’ve visited this friend in Santa Rosa Beach, which is about the most consistent thing I’ve done since I started traveling full-time. (I wrote about getting culture shock on 30A during my first visit). Each year I visited for different reasons: the first year I wanted to put my feet on land after a few months of sailing the Caribbean, last year it was to visit my favourite doctor for a medical second opinion after my big crash, and this year it was to regain my footing while enduring a miserable breakup.

Regardless of the reason however, the underlying theme – and comfort – of these visits have been that of my dear friend. After the accident last year, I realized that relationships with my family and friends are to be revered, and ever since then I’ve paid more attention to communication and been more present in their lives, despite geographical distance. (Ironically, much of this communication has happened via instant message – about which I have a scathing commentary in the wake of being dumped thereof).

Luckily when I arrived in Santa Rosa Beach, it wasn’t nearly as cold as it had been the week prior. Granted, I needed to get a couple of extra layers to fend off the chill, but within a couple of weeks the cold weather started to lift and the sun started to peek out.

Here are some pictures from this recent visit in Santa Rosa Beach, taken with a Samsung Galaxy S4 Zoom camera-smartphone, lent to me by AT&T to test out. (Dedicated review posts and a head-to-head comparison with the Nokia Lumia 1020 will be forthcoming).

When the sun shines, the colours pop here. And there are plenty of bays and brackish water inlets that are populated with beachy looking houses.

The town of Seaside features lovely charming (and any other words you can think of depicting pastel houses and picket fences) architecture. Seaside is among the first towns in the U.S. to be designed as an intentional community of sorts, giving residents access to the necessities of life within walking distance, and a sense of community among neighbours. It is a model for studies by architecture, housing, and design students, and Seaside’s big claim to fame is that The Truman Show was filmed there. Yes, there really is a place in the world just that picture-perfect. It’s almost creepy (like The Truman Show)…but luckily its charm supersedes the creepy slightly-too-perfect look.

Animals are welcome at Southern cafe in Seaside, including parrots on shoulders, big dogs who have dedicated barstools, and more.

The Outpost (in nearby Freeport) is a biker bar to the max. Strap on your chaps, order a beer and a pulled pork sandwich, and watch the wildlife. I particularly liked the stationary motorcycle which was a test of sobriety before you hop on the real thing. (Since the accident I haven’t had the courage to get on two wheels, but an obliging friend drove me there – much to the amusement of his biker buds).

As with most of florida, there be gators. “Chunky dunk” at your own risk!

Redd’s Fueling Station is just that – a gas station. The twist is, there’s a little bar in the back, and Redd herself – the woman pictured behind the bar here – who is “the singing bartender”. The story goes that Santa Rosa Beach community members wanted to help her with her struggling singing career. They got her set up in this place, and she quite literally sings peoples’ requests while she tends bar. Not only is her multi-tasking impressive, but her voice is beautiful and her wit and candour makes for a great evening out.

Santa Rosa Beach and much of this stretch of the Emerald Coast is known for its powder-white sand, and beautiful dunes lining the ocean creating brackish water inlets and coastal dune lakes – a rarity around the world.

And yes, there is a beach (hence the name Santa Rosa Beach) – I just haven’t made it down there with the Samsung camera yet!

That, and it’s still a bit chilly for my liking. I may be Canadian, but my thick skin is long gone.