My Sordid Attempts at Finding Love on the Road 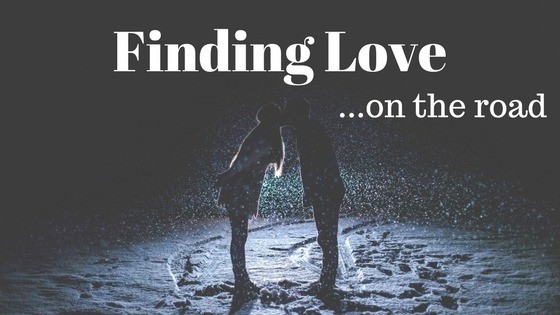 “But Nora, with all this moving around from place to place over the last 10 years, what about finding love on the road? Do you have relationships?” I was asked by the host of a ridiculously popular travel radio show in a live-to-air interview.

“Oh yeah! Lots of them!” I replied eagerly, before getting a hold of myself and saying “You know, I’ve had a few partners who I’ve traveled with along the way.”

Afterwards as I reflected on the interview and the fact that I’d basically just told 11 million or so people that I’M EASY, I launched into a reverie about the relationships I had in my first decade of full-time travel, and how finding love on the road – the kind of love that sticks – as a full-time traveler just ain’t easy, as much as I’m loathe to admit it.

This post was originally written in 2017; it has since been updated for accuracy of links and content.

The timing was ironic; a few hours after that radio interview, I parted ways with a fellow I’d nurtured a lovely relationship with over the last eight or so months. Our future: uncertain. Minimum time apart: five months. Reason: lifestyle differences. I had a house-sitting gig in Japan with my name on it, and he had an empty bank account and a job in the U.S. for the summer season that promised to pad his wallet and make a reunion possible.

I’ve been here before. Saying goodbye to passionate lovers I don’t want to say goodbye to, without any knowledge of when or where (or if??) we would meet again.

Although in theory I’m a fan of couples taking time apart and each doing their own thing as the beautifully well-developed individuals that we all are, it hasn’t always worked out so well for me (see “take two” below as an example of how absence apparently does not always make the heart grow fonder). So I’m nervous about our time apart, because anything can happen. My life has a funny way of swerving left when I’m preparing to turn right, and five months is both a short time and a long time for some twists and turns to happen for either one of us.

What seems to have smacked me in the face with this latest reflection on my romantic history is how bloody hard it is not just finding love on the road – but finding compatible love on the road. And when your lifestyle is as “out there” as being professionally homeless (as I am), compatibility takes on a whole new meaning.

In fact, the more I look back at my relationship history over the last 10 years, the more I see that lifestyle compatibility has been the downfall just about every time in one way or another. Have a look for yourself:

The Travel Saboteur: Finding Love on the Road, Take One

First, there was Kelly. I started dating this adventure-loving fella a year before I sold everything to travel full-time. And he came with me for the first few years of full-time travel. He didn’t have a digital career (nor the makings of one, as I was busy developing). But he was pretty quick on his feet and made some money along the way. Problems began when it became apparent that he didn’t really want to live a nomadic lifestyle. After unconsciously digging his heels in along the way a few times, running out of money, and eventually planting some defiant roots in Australia, I left him (and his new Aussie girlfriend!) there and moved on.

For more on what it was to experience my first breakup on the road and how travel affects relationships in general, read Breaking up While Traveling.

Next up was my Swedish Squeeze. Six months of casual romance turned into a serious romance with no direction. He had some financial savings, but no direction – in career, location, and ultimately, life. Which is why, when we were spending a few months apart pursuing individual projects (mine being the Ultimate Train Challenge), his lack of direction directed him into the arms of an old friend who would nine months later become a co-parent with him.

I wrote about my Swedish Squeeze and the philosophy of Romance on the Road when we parted ways, and then again in the throes of heartbreak in a post called Being Thankful in Grenada.

My next major relationship was a game-changer for me since it involved declaring the Caribbean island of Grenada as a home base, as that was where he and his adolescent daughter lived. I enjoyed many things about having this home base, but the relationship was fraught with problems, not the least of which were very different career paths and a complete lack of support for my online career (which was often deemed as “playing on my computer” even though it paid the bills for both of us).

Read about my decision to adjust my lifestyle to be with him in Time for a Change: The Professional Hobo Switches Gears, and about our ungraceful breakup in The Day I Was Dumped Via Instant Message.

Lost in Transition: Finding Love on the Road, Take Four

A couple of years later while living in Peru, I struck up a romance with a visiting American. He was in the midst of a big life change, and his relationship with me was the final kick in the pants he needed to quit his job and sell everything to move to Peru. Although we were pretty compatible in a variety of ways and he had the makings of a travel-friendly career, we just didn’t work out.

By this point I started keeping quiet about my attempts at finding love on the road – I thought perhaps writing about them was a form of jinx, so I didn’t write about him. It still didn’t work out.

Another year and a half passed, then I met J (another American) in Ecuador. At first glance, we epitomized compatibility issues in the departments of career, finances, and age (he’s….ahem….considerably younger than I). But despite our best efforts, we couldn’t deny a connection that went deeper than these incompatibilities to reveal a whole other playing field of what it is to relate to and communicate with another. While living at the retreat centre in Ecuador, we had a blissful life, compatibilities be damned. (It’s also worth noting that his talents in the realm of working with plant medicine created an underlying tapestry of compatibility). Outside of the retreat centre “bubble”, it’s another story full of unanswered questions; one that has me sitting on a plane and wondering when or where (or even if) I will see him again. Wondering when we do meet up again, if there’s enough glue to hold us together despite outward incompatibilities.

2020 Update: We kept things going for a few years, spending about half the year together and the other half of the year apart (he for a seasonal job in the U.S. and I for whatever travel-related squirrel I was chasing at the time). Unfortunately the pandemic kept us apart for an extended period of time, during which we grew apart and our differences in lifestyle and career became insurmountable.

Okay, so maybe my attempts at finding love on the road haven’t exactly been sordid, as the title of this article indicates (and how I felt after declaring my looseness to 11 million of my closest friends in that stupid radio interview).

The most compatible partner for me (logistically) would be somebody with an established location independent career and a lifestyle to match. As much as I know that no romance is perfect behind closed doors, it seems to me that location independent couples have some big advantages when it comes to being on the same page in career and lifestyle. And with double the manpower and often complementary skills, many of these wonder-couples do admirably well career-wise. (Check out some of my Financial Case Study interviews with couples to see for yourself).

But I’d like to think there’s more to the picture than just career compatibility, and that I’m indeed capable of finding love on the road that doesn’t come in the shape of a travel blogger or digital nomad. Maybe emotional compatibility, complementary personalities, and even physical compatibility (yeah, you know what I’m talking about) counts for something.

Or maybe compatibility in general is an overrated concept, designed by dating services. In “take four” I found somebody who was fundamentally compatible on many levels, but it still didn’t work.

But no matter how you slice it, finding love on the road – the kind of love that sticks – is difficult. It’s certainly getting easier, with increasing numbers of people designing lifestyles that allow them to live and work on the road. In the meantime, however, I still find myself in the world of nervous goodbyes and hopeful reunions. There’s not much more I can do at the moment than trust in the process and see what happens.

2022 Update: A new understanding of the digital nomad community

A few love-shaped puzzle pieces have fallen into place for me since writing this article. In 2018 after over 10 years on the road, I burned out of the full-time travel lifestyle, and I realize with retrospect it was because I had lost my sense of belonging. I had no social circle of other digital nomads to speak of, mostly because my travel lifestyle involved very local endeavours like house-sitting. While these were culturally insightful and rewarding, it was exhausting always being the “odd person out”, with a career and lifestyle nobody around me understood or appreciated. Constantly trying to convince people that I’m not on permanent vacation became a tiresome rhetoric that I failed at more often than not.

What I failed to recognize was that digital nomad conferences and coliving/coworking spaces are about more than learning a new skill and having a place to stay and work. They’re about community.

In 2021 I did circumnavigated the United States by train with a fellow digital nomad, who introduced me to a whole world of remote workers and travelers. They’re not travel bloggers, so I wouldn’t have come across them in the course of my online career. But these people – tens of thousands of them – share the same lifestyle and passion for travel as I. I realized that if I wanted to find compatible love – as well as compatible friends and travel partners, it behooves me to mix in these circles, at least part of the time. I’ll keep you posted.

Here some of the digital nomad initiatives and communities that can be a game-changer on SO many levels: