Seeing Lima (Through 5 Plates of Ceviche) 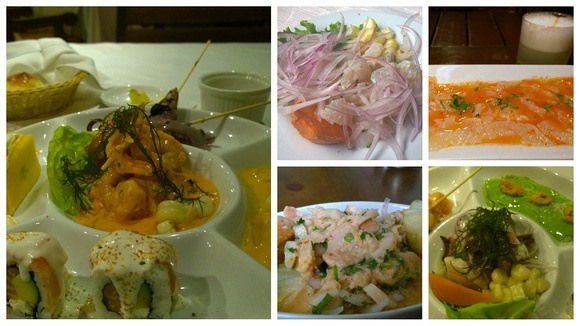 I joked with friends in Pisac that when passing through Lima enroute to Canada, my single-sighted goal for Lima was to eat as much ceviche as was humanly possible.

They laughed politely at my joke.

But I wasn’t joking.

I arrived in Lima on a Saturday afternoon, and in the following 50 or so hours I managed five ceviche meals. I’d have eaten it for breakfast as well if it wasn’t provided for free in my hotel.

Yes, yes, I’m sure there is. I just didn’t discover much of it, this time around.

However staying in the Miraflores area was a lovely way to experience some of Lima’s lively culture (enroute to and from ceviche-inspired meals).

Here are some of the cool Lima sights I stumbled on:

In Parque Central, I came upon a throng of people dancing to a repertoire of latin music in a wee amphitheatre that seemed perfectly suited for the purpose. After watching bemusedly for a while at the (mostly local) crowd of dancers, I was asked to dance by a lovely elderly Peruvian gentleman who really knew how to shake his money-maker.

Next to Parque Central is Parque Kennedy, which is also known as “cats park”, for its abundance of cats roaming around. They’re far from feral looking though; these kitties are well-fed and get lots of love from locals and foreigners alike.

A few blocks away on the coast is Parque del Amor, rife with young lovers following the shining example of the prominent statute. The view is incredible – as are the sunsets. If I had somebody to kiss I surely would have engaged in a full-on liplock there.

While standing at Parque del Amor, you can see para-gliders regularly swoop by having launched from the nearby cliffs, and surfers float in the waters below awaiting the perfect wave.

But for me, it’s about the Ceviche.

I make no bones about my fierce love of ceviche, and since I was told that Lima has some of the world’s best, I would have been downright irresponsible not to get a good cross-section of this raw fish delicacy. I frequented high(ish)-end restaurants and local dives alike.

The basic ingredients include raw fish/seafood, lemon, Peruvian peppers, onions, and it’s garnished with some boiled corn (choclo) and a piece of camote (sweet potato). But there are many variations on this theme, and I tried as many of these variations as I could.

Have you tried ceviche? Where (in the world) was the best you’ve had?

I lived in the Sacred Valley of Peru for over 2 years. Here are my adventures.

12 thoughts on “Seeing Lima (Through 5 Plates of Ceviche)”