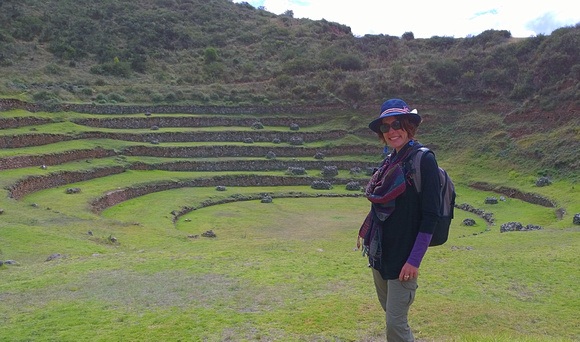 Near Urubamba (about 50kms from Cusco in Peru), you drive up and up from the Sacred Valley floor to reach Moray: a collection of Inca ruins at about 3,500 metres above sea level. As with most of the cryptic Inca ruins, the method of construction and ultimate usage is highly interpretable.

Moray is a set of three circular depressions, the largest of which is about 30 metres deep. It is said to have been an agricultural laboratory for the Incas; each level of circular terrace models a different Andean growing environment, with temperature variations of up to 15 degrees (Celsius) between the top and bottom. The idea is that with these differences in temperature, wind, and orientation to the sun, the Incas used Moray to study the effects of different climates on crops.

But there could be more to this story.

It’s odd that Moray is so remotely located; why would the Incas build an agricultural lab so far away from Cusco and other urban centres? It’s not like Peru is lacking in the space to build something like Moray.

One school of thought suggests that Moray is considerably more extra-terrestrial than agricultural in its use. Apparently UFOs have been spotted in the area many times over the years, and similar to Machu Picchu, you can’t help but feel a certain other-worldly element to Moray.

There is another school of thought yet, that Moray was a place of Inca ceremonies and celebrations; modern-day shamans in the throes of plant medicine have seen Inca spirits processing and dancing on the terraces. And locals periodically host massive celebrations in Moray, with hundreds of dancers and performers lining each terrace; but again, that’s one helluva commute for an ancient celebration, especially during the Inca times when roads and cars didn’t exist.

The rock piles in the picture above don’t have any significance; they’re just left over from the latest round of restorations. But apparently a group of spiritual seekers visited this spot and thought that the rock piles were ancient burial grounds. They spent the afternoon doing ceremonies to honour and free these buried spirits.

Whether Moray is an agricultural lab, a place of celebration, or even a landing pad for “others” (who have been reputed to have helped to build these miraculously engineered marvels in Peru), we’ll never know. It’s easy to create the answers and uses that suit our agenda (like our darling dead-spirit-releasing disciples above). The truth…probably lies somewhere in between all the theories.

What do you think?

14 thoughts on “Inca Ruins of Moray: Agricultural Lab or Landing Pad? You Decide.”