The Professional Hobo’s Bucket List – Past, Present, and Ongoing 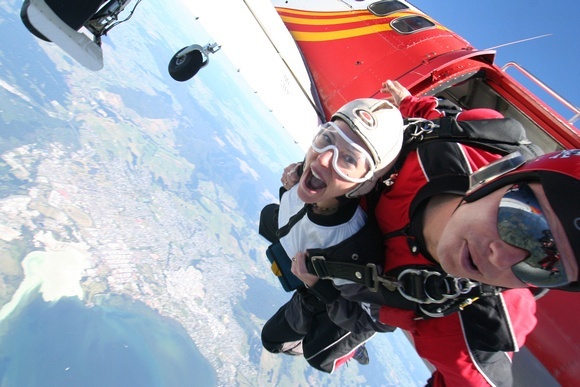 Yep, that’s me – doing the world’s highest (commercial) skydive in New Zealand. Skydiving wasn’t exactly on my bucket list (with 300 under my belt), but filming a tv show in New Zealand certainly was!

In reflecting on some of my life and travel experiences in the aftermath of my accident and wondering what’s next, I’ve realized I have quite an arsenal of experiences already.

I’ve written about reverse bucket lists yet shamefully, never committed to such an exercise myself – especially given my revelations in doing other similar exercises.

The other night while lying in bed, I found myself constructing a different kind of bucket list – one that reflects back on what I’ve done, reaches to the future, and includes ongoing items I haven’t yet ticked off to my satisfaction.

I lay there flooded with images and memories; reflecting on what I’ve done in turn fuelled my list of unchecked bucket list items, and even experiences I’ve touched on but want to explore more thoroughly. It was a no-holds-barred journey into anything and everything that excites me, with no rules and a very rewarding recap.

I encourage you to try it for yourself.

Here’s what I came up with (if you’re interested).

Here are some random achievements from bucket lists gone by – “the arsenal” as it were:

Bungee jumping (I did it in 5 locations spanning 3 countries, including the world’s highest in South Africa)

Live on a boat

Climb the Great Wall of China (I managed that one twice)

Sledging (like white water rafting, but on a boogie board. Sort of.)

Have a “pet” kangaroo

Meditate with Buddhist Lamas and receive their blessing

Hang Gliding (and fixed wing gliding, and I even skydived out of an ultralight powered parachute. I’m bragging, now, aren’t I? I’ll stop.)

Ride in a helicopter

Walk on a volcano

Shoot a travel tv show (I have a former career in tv, but in recent years I joined a couple of shows on the road)

Travel across Canada by train

Travel across Asia by train (The book I wrote about my evangelical love of trains? Yep – Asia’s in there too)

Play an instrument (I tackled four)

Become fluent in another language

Stay and live in a meditation retreat or ashram (Update October 2017: I did it again in Peru for a couple of years, and Ecuador for about eight months)

Host a travel tv show (are you amused?)

Ride the “Toy Train” to Darjeeling (Still haven’t done this, but I did ride the Deccan Odyssey, which is the most luxurious train in the world, in India)

Climb Mount Kilimanjaro (since the accident this item has fallen waaaay down on my list of priorities. It’s hanging on to this list by its fingernails)

Find a friend of mine in Iceland purely through word of mouth (it’s a very small place…how many Canadian gay male nurses live in Iceland? Wait! Don’t tell me – I want to find out for myself)

Explore northern Canada (too bad it’s so cold there)

Travel across India by train

Hack my way into a Bollywood dance scene in India

Go to circus school (what for? The flying trapeze of course! Also reduced to a pipe dream at this point, but I’m hanging on to the dream)

Swim with a whale shark

See the northern lights (without freezing to death; feasibility is debatable)

This is a list of things I’ve done to some extent, but want to explore further or deepen:

Give back through volunteering, fundraising, and however I can (I’ve had a few stabs at this (in Thailand and Australia), but there remains an ongoing desire to help whenever/wherever I can)

Fire Spinning (I learned to spin in Australia and New Zealand, and I still practice – without fire)

Climb more mountains (despite going crazy enroute, I have an ongoing pull to the mountains)

Act in a Hollywood film (although I’ve technically ticked this item off, I wouldn’t say no to another chance…)

Live as a local in foreign places (a thriving and ongoing desire, and I can say I’ve done it in a few places)

…and last but certainly not least…

Make friends with people all over the world

What’s tops on your bucket list…past, present, and ongoing?

16 thoughts on “The Professional Hobo’s Bucket List – Past, Present, and Ongoing”