Taking the Indian Pacific Train Across Australia: PART ONE 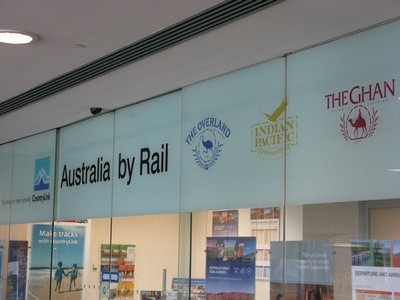 My reasons for taking the Indian Pacific train across Australia in the way that I did are not why most normal folk would have.

In reflecting on my three-day adventure riding The Ghan from Darwin to Adelaide, I was surprised at how quickly the time passed. I had figured that, despite my love of long-distance train travel, riding a train for 3,000kms (followed shortly thereafter by a further 1,000km by train from Adelaide to Melbourne and a few hundred kilometres of commuter trains after that) could devolve into a lacklustre experience; translation: it could get boring.

But to my surprise and delight (and almost disappointment), my time on The Ghan flew by. Between the well-timed whistle stops in Katherine and Alice Springs and the always-lingering conversations over mealtimes, I disembarked the train with very few of my pre-determined “train projects” complete.

So this time, I needed to challenge myself: I wanted to construct a train trip that gave me more than enough time to do everything: to take in the vast and changing landscapes of Australia, to meet interesting characters on the train, to read, to write, to sleep, and just possibly, to experience boredom.

I actually wanted to see if it’s possible to become bored on a train.

With this (somewhat misguided) motivation in mind, I became the architect of a train trip that most people wouldn’t dream of – neither in their fantasies nor their nightmares. In fact, on announcing my itinerary to even the staff working on the Indian Pacific (being people who I’d figure could best understand my passion for train travel), one girl responded initially with a blank stare indicating a lack of comprehension, then a flicker of both admiration and confusion accompanied by the comment “Boy, you really do like train travel, don’t you?”

My plan of attack? To take the overnight train from Melbourne to Sydney (11 hours, and 1,000kms). After a couple of days catching up with Sydney friends, I would board the Indian Pacific in Sydney and ride it the 4,000kms to Perth (stopping enroute in Broken Hill, Adelaide, Cook, and Kalgoorlie). After a whopping 24-hour stop in Perth (with a whirlwind tour aided by a fellow travel writer), I would re-board the Indian Pacific and ride it all the way back the 4,000kms and four days to Sydney to arrive in the morning, spend the day in Bondi with a friend, then board the last of my overnight trains back to Melbourne to complete my train journey that, after all is said and done, nears 11,000kms by train in 11 days.

This article was originally published in 2010 and has since been updated for accuracy of links and formatting.

This Indian Pacific series is intended to give you a sense of what it’s like to travel on the Indian Pacific; from the people you meet, to the scenery you pass by, to simply living life on a train. Long-distance train travel is much less about the destination, and much more about the journey (which is how I justify spending only 24 hours in Perth; something I’ll explain later).

So without ado, please enjoy this multi-part series about riding the Indian Pacific train across Australia (and back)!

Interestingly, not all passengers are traveling all the way through to Perth. Joe, for example, is simply taking the train the one night from Sydney to Adelaide, as he’s doing a reconnaissance mission in preparation for a move to Sydney. I meet a few other people who are only using the Indian Pacific as a (luxury) commuter train of sorts between Sydney and Adelaide to visit family or do business. I’m told that new passengers will also be getting on in Adelaide for the long haul to Perth.

In fact, there doesn’t seem to be any one theme that defines the people who are accompanying me on this journey. There’s Armand from France: a 20 year old backpacker taking a break from university; and Manuel from Germany, who is a 36 year old engineer and taking a four month career break (something that he does regularly) to travel through Australia and New Zealand.

There’s 29 year-old Mark from the States on a lightning-fast Aussie vacation to attend a friend’s wedding in Perth, an Australian couple in their 40s relaxing on vacation, and a couple in their 70’s who are from different countries and enjoying their rare time together on the Indian Pacific. I will get to know some of these people better (as will you) as the trip goes on.

And of course, not all characters are friend-material, which makes the ride even more interesting.

“Not in my direction! I’m sensitive to cameras,” she says in a sour tone, as she gets up to move behind me and my camera, face pursed the entire time.

“You weren’t even in the shot. I don’t tend to take portraits of people I don’t know,” I respond, immediately feeling defensive given this woman’s tone, but trying to remain cool.

“You should read more about EMFs. They’re very bad,” she starts, telling me that only once it becomes a problem do we realize how badly EMFs affect our lives. In an attempt to gain some sort of common ground, I respond by demonstrating an understanding of what she’s referring to by discussing the earth’s magnetism, the presence of harmful waves in technology and urban development, and how our bodies respond to it all. “Oh. Well, I’m not talking about the earth’s magnetism here. I’m talking about EMFs”.

Right. I must be thinking about the other electro-magnetic fields she’s referring to.

Moving on, she surveys my electronic domain. “I’m sensitive to that stuff too,” she says with a leering gesture towards my laptop. “Are you planning on staying there?”

As I’ve obviously already staked a claim of sorts in this corner of the train next to this delightful woman, it seems is a rhetorical question.

“Um, yes, as you can see, it was my plan to work here. But if you are sensitive, would you like me to move to the other end of the car? Would that help you?”

In the end, apparently moving my operation to the other end of the car (where, incidentally, there are no power points) is what this sour woman wants. I find it annoyingly ironic when I catch her no more than 15 minutes later….with a camera in her hands.

This woman doesn’t ruin my day, however. Instead I revel in how the differences between people make this world such an interesting place. I celebrate the connections I’ve made already on the train in such a short period of time; some of which I expect to nurture into deeper relationships as we journey across the Australian outback together.

At the end of my first day of riding the Indian Pacific, I’ve not even seen an inkling of the boredom-monster; in fact as usual the time has passed a little too quickly while I’ve gazed out over the Blue Mountains outside Sydney, chatted with fellow passengers, and even written a few small articles.

I go to bed excited for my trip to la-la-land, inspired by the gentle canter of the train.

Note: I received a complimentary pass from Great Southern Rail for this journey.

10 thoughts on “Taking the Indian Pacific Train Across Australia: PART ONE”