Train Travel: The Ghan from Darwin to Adelaide – Day Two 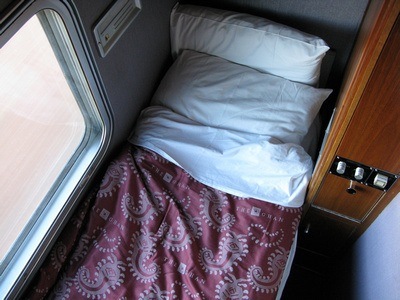 On day two of my three-day epic journey on The Ghan, I awoke from my slumber and gazed out the window. One of my favourite things about overnight train travel is laying in bed and watching the sun rise over the moving landscape.

And today was no exception. The earth was even redder than on day one, the trees were shorter, and there was more grass, hills, and textured landscapes that looked like mountains in the distance. These “mountains” were closer by breakfast, and interestingly weren’t as dramatic as they looked from afar; a testament to how flat everything else is in the Australian outback.

This article was originally written in 2010, and has since been updated for accuracy of links and formatting.
I received a complimentary pass from Great Southern Rail for this journey.

By late morning we arrived at Alice Springs, dead smack in the middle of Australia; about as isolated as it gets. It’s a relatively industrial-looking low-profile town, which isn’t nearly as picturesque as I had imagined. I think I fell into the same trap as many people; conjuring up visions of psychedelic sunsets at Uluru (Ayers Rock) and associating it with Alice Springs, despite a 360 mile gap between the two.

Nevertheless, I was rewarded with dusty greens in the trees and shrubs and contrasting sandy red of the earth: the unmistakable setting of the outback.

My whistle stop activity of choice was to go to Desert Park; a large reserve and animal sanctuary designed to give visitors to Alice Springs a taste of outback nature without having to go all the way to Uluru. Although it was informative and the bird sanctuaries were particularly impressive, much of it was under renovation when I went, and I suspect I would have been happier taking a camel trek.

Ah well. Maybe next time…? I did get some great shots of the wildlife in either case.

Back on the Train…

…I discovered that lots of people embarked at Alice Springs, and were exploring their new digs for the day and receiving their orientations.

I had a chance to chat with the Train Manager for the trip. Being fascinated with train travel in general and the lifestyle of working on trains, I quizzed him about his staff. He had been working on trains for over 30 years, and he still loved it.

I recalled chatting with the staff when I traveled across Canada by train and learning that they love their jobs so much that somebody pretty much has to die for positions to become available. Greg echoed this sentiment – to a point.

“Because staff is based in Adelaide and they’re away for up to a week at a time [with return train trips], it’s hard for some people to cope with,” he said. The unconventional unpredictable schedules and long absences don’t bode well for some lifestyles.

The flip side of the coin is the time off (which ends up cumulatively being almost six months of the year), and the chance to see so much of Australia. Each train manager hires and manages their own train crew, and each crew rotates around Great Southern Rail’s four routes. Although it’s hard work with long hours, these train journeys are often pinnacle experiences for passengers from all over the world, and I gathered the sense that it’s rewarding to enable and be a part of their experience.

Heck – I want to work on trains.

Just before dinner and as the sun was setting, I noticed we were passing huge tracts of land that was burning. Although the black smouldering ground seemed to have largely spared the trees and shrubs, the area that was burning seemed almost too large for a controlled burn. I saw no evidence of human intervention or maintenance; I saw no evidence of human life at all.

At the Whistle Stop in Katherine I visited a museum at the visitor centre that discussed the Australian Aboriginal attitude towards fire, which is refreshingly different to the European view:

In light of the sour taste the Victorian Bushfires left in my mouth, it reminded me of the restorative powers of fire in general. So on looking out at the blackened landscape, I chose to see it as an opportunity for re-growth. The sun was full and deep red from the smoke, and set a gorgeous purple hue to the rest of the sky.

(I later learned that these were indeed controlled burns, either set by somebody with a truck who was patrolling, or by planes that fly overhead and drop small balls of fire in strategic places to start the burn).

You never know who’s sitting next to you…

…especially if you don’t watch Australian television very much. On Day One I met a lovely couple (Peter and Marie) at the welcome reception, and we mutually promised to share a meal together before the end of the trip.

It wasn’t until halfway through dinner on Day Two that I discovered Peter is a prominent figure on a daily tv show in Australia, and that with my money-saving tips and techniques we may have an occasion to do some business together. Now all the funny looks people were giving me for unabashedly sitting next to them at the welcome reception and chatting candidly made sense.

Celebrities are people too, you know!

After languishing over dinner and exploring many commonalities (from business to television to journalism to wine), we looked up to realize that not only all the guests had left, but even the crew had eaten and the dining car was closed. I had a quick night-cap before wandering off to bed and sleeping like a baby while the train rolled on throughout the night.

Check out the final Day Three of The Ghan adventure from Darwin to Adelaide!

7 thoughts on “Train Travel: The Ghan from Darwin to Adelaide – Day Two”