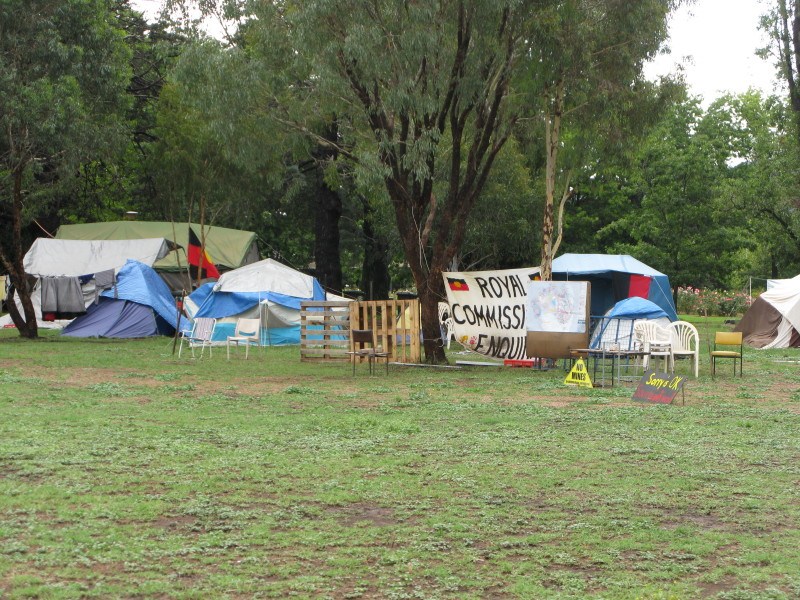 While I was visiting Canberra, my friend (also a Nora) and I wandered by a derelict collection of tents and temporary-looking dwellings in front of the old parliament building.

“This is an odd spot for a campground,” I commented.

Huh? That’s some kind of embassy.

This article was originally written in 2010 and has since been updated for accuracy of links and formatting.

Nora admitted that she didn’t know much more about it than that, and so we slowed our pace as we walked by. With laundry hanging on lines strung between trees and tents, it appeared that people lived there, so out of respect we limited ourselves to sidelong glances at this curious settlement while we passed by.

Seeing an information sign on an easel at the end, we took the opportunity to stop, read the sign, and peer beyond it to see what the place was about. While we stood there, Mike approached us.

After exchanging pleasantries and learning that he’s lived here for the last three weeks, he sensed our unanswered questions.

“Would you like to learn more about the Australian Aboriginal Tent Embassy?” he said. “I can get my Auntie. She knows heaps more than I do.” Nora and I glanced at each other and with a sparkle in our eyes said yes – knowing this would either be a gem of an afternoon or an uncomfortable dud.

A minute later, Sheralee sauntered up to us. She was wearing one old boot, the other foot being bare. Her outfit was clean, but shabby. She wore dark sunglasses, and her overbite revealed yellow crooked teeth with large gaps where teeth had once been.

She addressed us in a friendly and forward manner. “Mike here tells me you wanna know more about our embassy,” she started. We nodded, temporarily speechless and wondering what we’d gotten ourselves into. Sheralee put us at ease by smiling and bidding us to follow her.

Instead of walking toward the tents, she wandered over to the steps in front of the parliament building. On the way she exchanged pleasantries with a businessman who was sitting on the steps, and obviously knew her.

When we stopped we found ourselves looking down at a section of pavement with faded paintings on it.

“This is where it all began,” she said. “In 1972, we lit a fire here and sat around it.” She pointed to the faded artwork and described what the aboriginal dots, lines, and symbols meant. “We were protesting and advocating for the rights of Australia’s aboriginal people. They tried to take us away, to move us, to hide us, but we wouldn’t go away. Eventually we moved the fire down there [she pointed to a spot 10 metres away, where a small fire was burning], and they reluctantly allowed us to stay here.”

There is always at least one person living on-site twenty-four hours a day, and as many as hundreds at times of high protest. From the looks of it, a handful of people were currently residing there. It was imperative that the fire be constantly tended, as it had been burning for 38 solid years [at the time of writing; longer now].

She (half) joked that parliament didn’t much like the sight of them on their front lawn, so they built a new parliament building behind the old one.

I was confused. “So…the Australian government allows you to stay here in protest, but hasn’t granted you a meeting yet?”

Sheralee was ambiguous, but indicated that they still hadn’t been heard, in that there weren’t satisfactory results yet. I asked what would have to happen for this 38 year protest – the world’s longest standing protest – to end.

She said they want their land, a treaty, and sovereignty. Getting into specifics was impossible, as it seemed to involve more depth and detail than was intended for this impromptu tour.

Shortly thereafter we were joined by a local British fellow who seemed to know Sheralee. He had his wife and two foreign university students in tow, and introduced Sheralee to the students – a girl from Japan and another from China. Sheralee welcomed everybody to the conversation and led us down the steps to the fire.

Hand-painted signs prohibiting alcohol and smoking surrounded the fire, which was obviously a sacred area. We lowered our heads in respect as we entered the circle. All the while, the British man tittered and talked nervously. He tried to make small talk and demonstrate his “extensive” knowledge about all things aboriginal, but the more he talked, the more he demonstrated how little he knew.

Sheralee handed each of us some eucalyptus leaves. “These leaves, eucalyptus leaves, are cleansing for us. We use them in dances, and ceremonies. Sometimes you see us shaking them and saying ‘Coo!’ when we want to clear the bad energy”. For emphasis, she rhythmically shook the eucalyptus branch and accented it with a “Coo!”

I imagined the nervous energy dissipating with this gesture. We all smiled, and tried our hands at ‘coo’-ing.

“These eucalyptus leaves are cleansing and healing. We rub it between our hands for the oil, and we burn it too.” She invited us each to throw our leaves in the fire, and to stand in the smoke and let it wash over us for cleansing.

With some degree of ceremony, we performed this ritual. But the smoke was not to be controlled, and as the moments passed, we all just stood in a circle around the fire and allowed the smoke to come around to each of us of its own volition.

We continued to chat about the aboriginal people’s history, land, and traditions, as well as current events (aboriginal and otherwise). Of interest to me was the reason Sheralee only wears one boot: so that she can use her bare foot to connect with the earth in aboriginal tradition.

Periodically after an off-beat comment from our nervous British friend, Sheralee took a step back, did a small dance while shaking the eucalyptus branch she still had in her hand, and said “Coo”! We felt the bad energy being whisked away, and pursed our lips to prevent giggling.

The more I listened to Sheralee, the more I realized she was educated, well-traveled, experienced, and well-spoken. My initial impression based on her personal appearance was mistaken. I reveled in this realization. As a traveler, I’ve always prided myself on having an open mind, and yet here I had allowed pre-conceived notions and appearances to cloud my judgment. It’s these qualities that (at least in part) led to aboriginal issues in Australia to begin with. And here we all were, standing around a 38-year-old fire to remind us.

After conversing around the fire for close to an hour, silence fell upon us. It seemed that this was the end of our tour of the aboriginal tent embassy. We took a few pictures, all shook hands and hugged, and then we each wandered off in different directions.

Other Travel Editorials and Anecdotes by Nora Dunn: