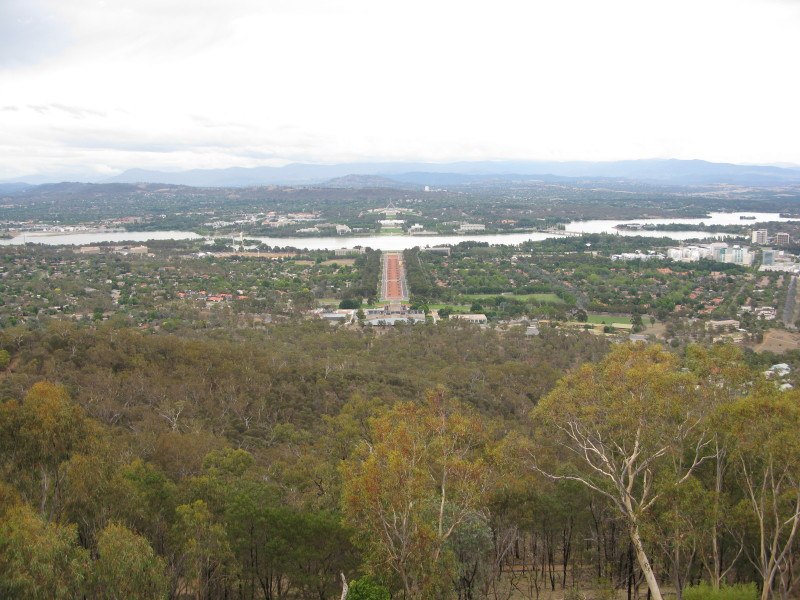 Canberra (pronounced more like “Can-bra” with the emphasis on the “can”), gets a bad rap.

“Why would you want to go to Canberra?” was a question I had to answer more than once about visiting Australia’s capital city. Most of the people asking this question were Aussies themselves. For many tourists, Canberra doesn’t even make their radar screen.

And although Canberra may not be home to as much excitement and variety as Melbourne or Sydney, I quite enjoyed my time there.

This post was originally published in 2010, and has since been updated for accuracy of links and content

Of course, a good chunk of what made Canberra the awesome place that it was, was the incredible hospitality and company of my Canadian friend who now lives there – whose name is also Nora. Wait – it gets weirder: we discovered while visiting together that we actually went to the same performing arts high school, and we were both drama majors. Thank you, Mr. Yates, for being the cue that we may have shared the same science teacher!

Canberra is very much a planned city. Canberra’s creator (Walter Burley Griffin) scribbled out the initial design on a cotton cloth in 1912 as part of a design competition. He won – and now his garden city design is enjoyed by Canberra’s 341,000 residents.

Canberra is very green. Griffin intentionally designed wide avenues and tree-lined streets to make Canberra a nature-filled city. Practically in the middle of it all are two mountains: Mount Majura and Mount Ainslie, both of which (despite the radio towers and weather stations on top) are havens for nature enthusiasts and nature itself.

Canberra is very…round. The main roads of Canberra are arranged in concentric circles. This wreaked havoc with my internal compass, and I’ll admit I spent most of our time in Canberra completely lost and wondering which way was North. .

Rush hour lasts about 20 minutes. And even in the height of traffic, it doesn’t take you much longer than 20 minutes to get anywhere in the city. It has the feel of a big city and small town at the same time.

Canberra is not very easy to get to, or from. Sure, traveling there from Sydney is a non-event with buses and trains regularly running the four hour trip. But traveling from Canberra to Melbourne – the next closest major city – (without flying) involves an 11 hour journey consisting of multiple buses and/or trains. When I commented on this idiosyncrasy, Nora (not me, the other one) drew parallels to Canada’s capital city of Ottawa. There seems to be a method to the madness of keeping a capital city a little bit out of the way, for security reasons if nothing else.

While at the bus station near downtown (if you can call it that), I found “Rudd Street”, presumably named after Australia’s current Prime Minister, Kevin Rudd (who as you may recall, I go way back with). Considering this was a fairly centrally located street that must have been recently named, I have to wonder how many other unnamed streets there are in prominent locations, waiting for a Prime Minister to come along and bless them with their identity.

Despite what seems like a high cost of living (I was shocked at real estate and rental prices), Canberra is a very “liveable” city. Outdoor and sport enthusiasts appreciate the nature trails and mountains (both in the city limits and very close at hand), it is easy to get to most places (with a car), and it is safe and friendly.

Canberra is the site of the world’s longest protest. It has been decades in the making, and you can read about the Aboriginal Tent Embassy and my surprising experience with it here.

All the museums have free admission. The only exception to this rule is when a famous exhibit is being showcased, in which case a special fee is levied. I think this is a fabulous feature, for both locals and visitors, and I wish that Ottawa’s plethora of interesting museums could follow suit.

And interesting museums, indeed! I only saw a tiny smattering of what Canberra’s museums have to offer, but it is extensive. The War Memorial Museum in particular gets great accolades.

Where Canberra gets its bad rap is because it lacks nightlife and is (not my words) “full of stuffy public servants”. Alas, most of the people I met were fantastic, and I didn’t go out drinking at night, so I can’t truly verify or nullify either of these accusations. What I do maintain, however, is that Canberra is a very liveable city, and a great addition to my personal Australian landscape.

Things to do in Canberra