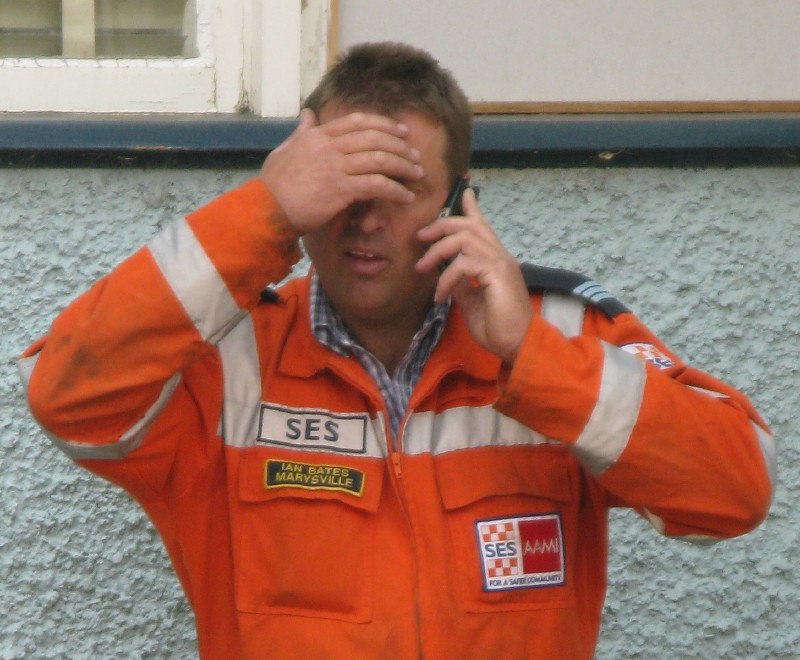 We sleep solidly, despite lightning in the area (a big risk for additional Australian bush fires). I snap awake with a start, with very little transition between my peaceful dreams and the stark reality of our smoky motel room and third day of evacuation. I am pleasantly surprised to see blue skies and sunshine…the first time since the fires began that daylight doesn’t look like intensely foggy dusk.

The first thing we hear on the radio (which immediately is switched on as soon as we are conscious) is that in previous comparable fires, it usually took four days for the fire to travel the same distance this one took one day to travel. That’s what 100km/hour winds and 50 degree temperatures will do I guess.

After visiting the CFA in Mansfield, we are told that we can return to Alexandra, thankfully. We are exhausted from simply sitting on our hands, disconnected and disenfranchised. We hope to be of use in Alexandra, doing whatever we can. We are confident that various Rotary club members (Kelly & I are honourary members of the Rotary club of Alexandra) will already have wheels in motion.

We have packed up, we buy a few changes of clothes at the local Op Shop (Opportunity Shop – a second-hand store), and say goodbye to our friends Bec her son Zach, who will remain in Mansfield; still a safe haven.

Reports indicate that Rubicon (where our home is) is under direct threat of fire; all hands are on deck and working on asset protection.

On our way back to Alexandra to help the hundreds of homeless in need, we somehow forget that we are among the homeless ourselves.

The death toll is up to 108. Mayor Brumby and Prime Minister Kevin Rudd are flying to Alexandra.

We arrive in Alexandra to a state of organized chaos. The secondary school is a madhouse, and as we expect, Rotarians are milling about providing food, sorting through piles of donated clothing, and doing crowd control. Centrelink (Australia’s social services) is handing out applications for disaster relief payments, and camera crews are everywhere.

We immediately get busy carting sorted clothes to a larger storage shed for distribution, since it is starting to take up too much room in the secondary school hall.

More and more “suits” appear, standing in various vantage points, and looking coldly official. It is not until I see an earpiece on one of them that I realize they are the Prime Minister’s secret service personnel. Before we know it, Kevin Rudd is mingling with the people, talking to those affected by the fires, and giving media interviews.

As we continue to load clothes into the trailers, a friend says (a little too loudly) of the secret service personnel: “Gee, it’s strange seeing so many people in suits, when all I have are the clothes on my back!” She turns around to find herself face to face with Kevin Rudd, who smiles sheepishly and moves on.

Kelly implores the CFA and DSE to allow him to fight the fires given his valuable experience, contingent on getting us the appropriate paperwork for sponsorship and (more importantly) insurance. In his frustration with the lack of response, he implores Mayor Brumby’s personal assistant, who says that during the period of fighting the fires it will be too difficult to get the paperwork through, but that afterwards all Kelly needs to do is call his office.

I turn around from eating my sandwich to find myself face to face with Prime Minister Kevin Rudd. Never one to miss an opportunity, I extend a hand and have a brief conversation with him. We don’t manage to solve the world’s problems, strangely enough, but we have a nice chat nonetheless.

The clothing has all been moved from the secondary school to some nearby storage sheds, where a small group of volunteers is sorting through and organizing them for distribution to anybody who walks up needing clothes and other miscellaneous items.

I look up from the grindstone to discover that the fire is burning a mere five kilometers away. The winds and smoke are swirling, and it is difficult to tell if the fires are heading our way or not. People are largely unaware of the encroaching smoke; for all our efforts, we realize we haven’t heard a radio report in hours. Initially this was a good thing, but now I feel out of touch and concerned.

A huge delivery truck arrives to us from Melbourne. The Rotary club of Sandringham has collected (literally) a tonne of new and almost-new clothing, accessories, and related goods. Members actually went to the stores and bought bags upon bags of new things – a brilliant display of compassion and generosity. Apparently they called numerous towns that were housing evacuated and displaced refugees, but nobody would accept this contribution. We happily unload the truck, knowing that these goods will get into good hands.

This is exhausting: keeping one eye on the skies, winds, and smoke, all the while going as quickly as possible carting and sorting the donations that have been piled upon us faster than we can organize it. Everything is blurring. We are almost more emotional about the outpouring of support and influx of volunteers wanting to help than we are about the possibility that our homes are engulfed in flames.

Fire has breached the road 5kms away. From certain vantage points in Alexandra, apparently you can see the flames. Three camouflaged trucks full of army personnel roared by ten minutes ago, instilling both confidence and fear in us. We – and so many others – will be here for this if the fire is carried into town by these blustery winds.

While we are all busy focusing on the volunteer tasks at hand, we are also coming up with our own personal fire safety plans on the fly.

Jade & I have finished canvassing the entire town, distributing flyers and talking to displaced people about the distribution centre and encouraging people to come by and get some of the things they need. Sadly, many of the displaced and evacuated people are embarrassed to accept “hand outs.” Getting people to come out is harder than expected.

Another truck is arriving from Melbourne in six minutes with yet more goods like furniture and toiletries. This is getting big.

We break for the night, and bunk down in Alexandra with some friends who lost their house south of Taggerty – or at least most of it.

There is a full moon tonight. The moon is big and blood red from the smoke. It is eerily beautiful.

I am going to bed. It is strange how although we feel safe sleeping here in Alexandra at the pub (yes, the pub), we bed down with our essentials (passport, laptop, wallet, water) by our heads and fully dressed, just in case we have to move quickly in the middle of the night. The fires are burning approximately 3kms away from where we sleep.