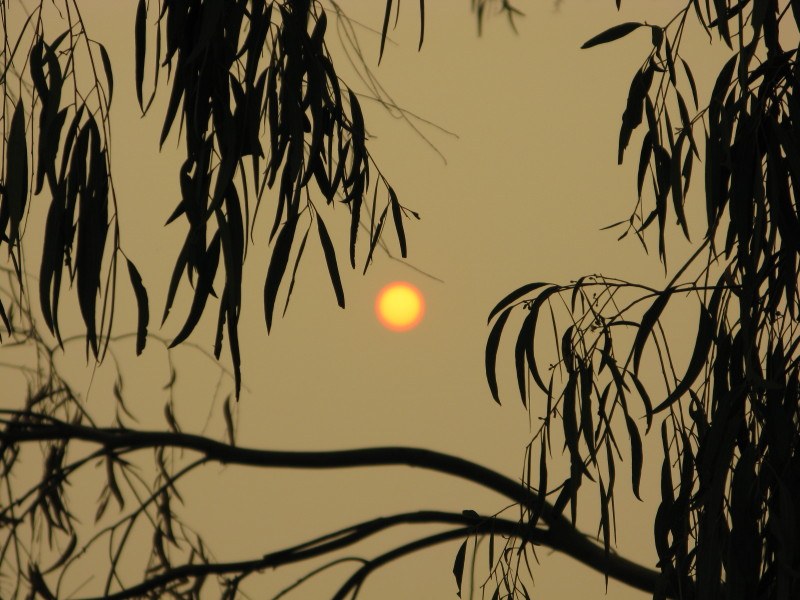 In the middle of the 2009 Victorian Bush Fire of Australia. Looking directly at the sun is no problem with the smoke as thick as it is.

We receive a text message from Melbourne that they are getting heavy rains. They sadly have not come yet here in Mansfield or any other affected area. Taggerty held off the fires last night by a hair. 25 people are confirmed dead, and the fires are now burning across the state of Victoria.

The smoke is thick in Mansfield, 100 kms away from the fires. We want to do whatever we can to help, and want to drive back into Alexandra to help those lost souls we saw last night. The seven hours of tossing and turning we got was surely better than the sleep people in Alexandra got.

We receive news that the Kilmore and Murrindindi fires – two separate fires – have merged into one giant fire.

We go to the car to check in with the CFA in Mansfield before heading to Alexandra. The car is covered in ash.

We are told by the folks at the CFA in Mansfield that we cannot go to Alexandra. There is a wind change happening such that we are told we would not be safe there. We are resigned to spending another day in Mansfield. It is a helpless feeling, and not necessarily even one of safety. An ever-watchful eye is kept on the skies and an ear on the radio.

Reports are coming through that a number of the fires were started by an arsonist. This is a repeat performance of the 1983 Ash Wednesday fires, which were also arson. We are nauseated at the thought that somebody might have done this on purpose.

We arrive in Yarck, near Alexandra, to visit and evacuate Jade’s grandparents. They are reluctant to leave, even as the smoke gets visibly thicker and the wind blows stronger and hotter in the short time we are there. They were told by their local CFA that Mansfield is on fire. Is seems that one hand is not communicating with the other. Or is there something that these people know that we don’t? The confusion is chaotic and disturbing.

By now the winds are gusting, and we feel an urgency to get out of Yarck. Spot fires are being reported as far as 20kms away from the actively burning fires. With winds like these there could be fire anywhere at any time. Nothing, nowhere, feels safe.

Lightning across the state is creating additional risk for new fires popping up anywhere and everywhere.

As we return to Mansfield, we pass dozens of cars going the opposite way. We wonder what they know that we don’t. I feel nauseous.

Back at the CFA in Mansfield, we discover that Taggerty is still holding the fires at bay. The cars passing us are all taking a round-about route to Melbourne along newly reopened roads.

We decide that we are Professional Hobos, aka Suckers For Punishment.

The confirmed death toll is up to 35. We know this will exponentially increase as fires stop burning and access is gained to areas still under siege. The biggest cause of death is people waiting too long to evacuate and getting trapped in their cars trying to escape.

The radio host asks a Vic Roads authority for the road closures. Incredulously, he asks her if she really wants him to read them all off; there are literally too many to mention.

The radio reports Taggerty is under urgent and direct threat. We pour over maps. If the fire reaches Eildon, which is 20kms away from Mansfield, we can expect problems with spot fires and ember attacks.

B) How to fight the fires from Mansfield if they come tonight.

I can’t believe we are having these conversations. The novelty of the situation has officially worn off, if there ever was a novelty to it.

Conversations with family members out of the area are fraught with white lies. “Everything is fine; we’re at least 100kms away from the fire. Yes, Dave is fighting in Taggerty, but he is just having a snooze this afternoon. All is good. Really.” Even if this is true, we have lost our conviction.

The fires are now approaching Taggerty from two separate directions, west and south. We say silent prayers for Dave, who is on the front lines.

The government has announced a $10 million dollar relief fund.

Taggerty is (again, or more so) under siege. Residents of Eildon are being urged to evacuate, and previously closed roads have been reopened to allow residents to travel to and take refuge in Alexandra. The fire in question is now 60,000 hectares, and this is just one of many out of control fires.

550 houses have been lost in Kinglake – the devastation from another fire, closer to Melbourne. The Mayor of Murrindindi’s house is gone. The only three towns not yet affected are Alexandra, Eildon, and Yea.

I distract myself by writing some point-of-interest pieces for one of my editors. I realize in the throws of it that this is pointless; the places I am writing about have likely burnt down. I realize that 90% of the pieces I wrote about last month are all gone.

We are exhausted. We turn off the radio, unable to stand hearing the same dismal reports recycled and escalated throughout the day. The mood is immediately lifted among our stir-crazy group of five people. Each of us does something to make us personally feel better, be it a swim, a soak in the bathtub, reading, or listening to music. We play cards, and laugh for the first time since this began. It feels good.

The break was nice, but the wake-up call when we switch the radio back on is jarring. The death toll has climbed to 84, and over 700 homes have been destroyed. And counting.

Dave’s sister gets a SMS message that three people in Taggerty have died. The news is now calling this the worst natural disaster in Australian history. There are now over 20 fires burning, 12 of which are out of control. Ironically, Queensland is underwater with flooding.

The merged fires that threaten our homes is now called the “Kilmore complex” fire. It is now over 100,000 hectares in size.