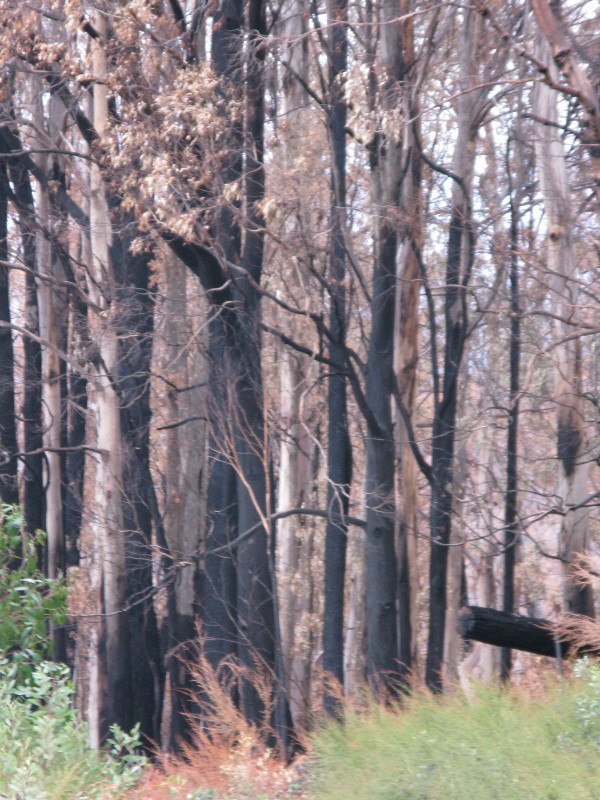 This personal account of the Victorian bush fires was originally published in 2009. It has since been updated for accuracy of links and content.

I sleep like a log on the floor of a back room at the local pub in Alexandra. It is amazing how we can make a home anywhere when we need to. This whole ordeal is much easier on Kelly & I in particular since we are travelers; it is not foreign to us to live out of a bag.

Jade & I have been saddled with the job today of being the greeters and directors at the donation centre, given our cheery dispositions from the day prior. We grab a few t-shirts and write “free hugs” all over them, slapping some smiles on our faces and preparing for a small onslaught of distraught people who need supplies.

My cell phone battery is officially dead and the charger is….at home (which could, at the moment, be engulfed in flames. I have no idea). Grr. Not having an operational phone at my side is unsettling given the circumstances. I am keenly aware of the items that remain back at home that I would really like to have in my possession, and not at direct risk of burning.

We realize as we wash and wear the same clothes that we are just as much in need of supplies at the donation centre as anybody else.

We eat dinner at the DSE/CFA base camp for the Victorian bush fires. Last night in conversation with some base camp workers we were told that anybody can get a hot meal and a shower there (and even a night in one of the hundreds of tents set up in the footy oval). Not having eaten a proper meal in four days, dinner is absolutely delicious. (Oh yeah – and free).

We chat with the emergency workers who have come in from all over the country – many of whom are volunteers – it is refreshing and energizing to speak to people who are not refugees. We recharge our batteries with good food and convivial conversation. These people are heroes; and they are seeing and dealing with stuff that nightmares are made of.

Alexandra is under ember attack. There is a surreal existence, living with this type of risk day in and day out. What do you do? Cry? Sure, a little. But you can only do that for so long. So you just go about life and do what you can. Everybody here is in the same boat.

Talking with an ambulance services counsellor at dinner who is providing counsel services for the emergency workers, she sums it up nicely when she says “I’m a qualified counsellor. And some of the things I heard today broke me. I need counselling myself to cope with this stuff.” Stories of trying to get into houses to look for bodies, but not even getting that far for all the carnage along the way is unimaginable.

We hear through friends in Melbourne that ABC Radio (the most reputable station for Victorian bush fires reports) has announced the evacuation of Alexandra. We have heard nothing to this effect, and are unsettled by it. We re-load the car with our essentials in case we need to make a quick getaway, but we don’t know where to go. We sit in the car listening to the radio for an update, but hear nothing more about Alexandra. We see no sign of a reason to evacuate; the smoke is no denser than it has been throughout the day.

I am so over this. I have officially hit a wall. There is no escaping this mess, and I feel quite literally trapped by fire. I am now among the walking zombies I have been trying to infuse some positive energy into. I am sick of this roller coaster ride – I want to get off! I have heard no less than six separate times in the last two days that my house has been flattened by fire, followed shortly thereafter by definitive news that it is till standing.

Alexandra is evacuating. No it’s not.

The house is gone. No it’s not.

People are getting feisty. No – angry.

My lips are chapped. The dryness of the air surprises you in these subtle ways from time to time.

I realize as I go to sleep that Alexandra is the last bastion – the Fort Knox – of this entire Murrindindi shire, which is already 40% burnt. The shire’s counsel is here, the base camp for over 300 emergency fire personnel is here, and is it the last place for people to evacuate to. Huge fire breaks have been built around the town because of this. Fire simply cannot breach the town – if Alexandra is lost, the entire shire will be.

I convince myself that this is as safe a place as can be, despite the large billowing clouds of smoke approaching that eerily resemble the smoke we saw on Saturday approaching Taggerty.

Sleep does not come easily.