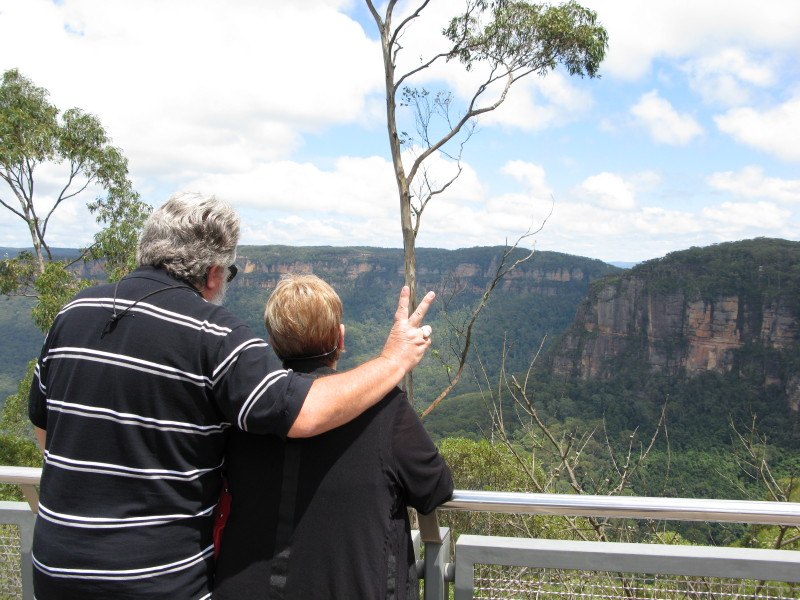 My visit to Sydney and the nearby Blue Mountains was beautifully rounded out by staying with some friends just outside of the city. And aside from a chance encounter – or rather encounters (37 in total) – with some nasty spiders, all was beautiful.

First, we took advantage of a gorgeous day (the first that wasn’t rainy in ages) to visit the Blue Mountains. Although they weren’t particularly blue (they’re supposed to have a blue-ish hue to them from all the eucalyptus oil in the air, but it wasn’t apparent on this day – likely because of previous rain), they were indeed beautiful.

One of the towns nestled around the Blue Mountains is Leura, with a small population and a huge collection of boutique shops perfect for window shopping. Stop at the Red Door Café for a wonderful meal if you’re in the area.

On the second consecutive beautiful day, we took advantage of the sunshine and visited Wollongong to enjoy prawns on the beach and to meet some Aussie seagulls. Wollongong has miles upon miles of surf-friendly beaches, and after school, it isn’t uncommon to see hoards of students in their uniforms headed for the beach with schoolbags on their backs and surf boards/boogie boards under their arms.

If you have seen the movie Finding Nemo, you’ll identify with the world-wide call of the seagull: Mine, Mine, Mine! Well here at Wollongong while we enjoyed our delicious prawns, the Aussie seagulls crowded us, looking for handouts in typical seagull-style. But this time, instead of Mine, Mine, Mine, I’m sure I heard their own individual Aussie incantation: Mate, Mate, Mate!

And if that wasn’t amusing enough, the oversized and gangly pelican that eventually joined our mob of seagulls looking for food rounded out the fun!

And now, for the spider part of the story.

As you may recall, I’ve not had the best of luck with critters that bite and sting. In my first two weeks in Hawaii, I managed to get attacked by centipedes twice, the second onslaught rendering me incapable of walking for a short time.

So with my luck and now being amongst the highest concentration of icky spiders and snakes of anywhere in the world, I had wondered how I’ve survived this long in Australia largely unscathed. Now, I don’t have to wonder any more.

One night, a spider – or spiders – must have decided was I just too delicious for words, because I awoke in the morning with dozens (quite literally) of bites. 37 bites to be exact. Although I don’t know what kind of spider it was, I’m willing to bet it wasn’t poisonous since I’m not dead yet.

But each day since then has been an adventure in discovering how these bites have mutated. First, it was the standard symptoms: itching and swelling. But a week later when I’d have suspected they would have largely dissipated, they were instead mutating in gruesome and slightly painful ways.

Fevers and other internal physical symptoms aside (!), these bites were hours of entertainment. Some of the bites resembled blood blisters, while others turned hard and became raised from the skin. The heat, redness, and swollen hard skin radiating from each bite rounded out the look.

Still thinking this was all quite a bit of fun (indeed, I have a perverse idea of what “fun” is), I showed my war wounds to a few Aussies, who highly suggested I seek medical attention – immediately.

(The pictures below were taken when I was still amused by them, the day before I asked for advice. Just imagine those bites as bigger, darker, and all over my body, and you get the idea!)

Not having Australian medical coverage and having dealt with travel insurance and hospital visits not once, but twice since leaving Canada, the thought of going to yet another hospital sent shivers down my spine. After the Dengue fever fiasco I had resolved that unless I was on the brink of death, I would not file any insurance claims and would pay cash for whatever medical attention I needed.

So instead of going to the hospital, I went to the pharmacy to get a second opinion.

And they told me to go to the hospital.

Defeated, I asked my host if she would like to show me a part of Canberra that not many tourists get to see: the inside of an emergency room. But we didn’t get very far; after being told by ER administration that it would cost $400 for the simple privilege of seeing a doctor (tests and incidentals are extra), I promptly replied that I’d rather die from the bites and reeled out of there.

Instead we found a medical clinic which charged a quarter of that amount, and 20 minutes later I walked out with a prescription for some antibiotics that would kick the heck out of whatever infection seemed to have a hold on me and was now making my body turn an interesting purple colour.

Days later, there is little evidence of the 37 bites of which I was so proud. And truthfully, I’m not even sure they were spider bites, although it’s an educated guess based on previous (isolated) spider bites. My body continues to be pillaged by antibiotics, but overall I survived the incident largely unscathed. I’m actually kind of disappointed I don’t have some grotesque scar to show as a war wound!

Sometimes they say the best travel adventures are mis-adventures. With a smile on my face, I can now say I’ve been attacked by Australian spiders (or something like it; let’s just say they were spiders, shall we? It sounds better for effect) and survived the incident. On to the next adventure – hi ho!