Train Travel: The Ghan from Darwin to Adelaide – Day Three 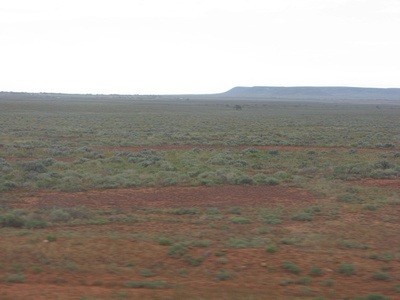 Almost 48 hours after boarding The Ghan on Day One in Darwin, stopping in Alice Springs on Day Two, and with only a few hours to go to Adelaide, I was surprised to wake up and discover that we were still very much in the Australian outback on this three-day journey from Darwin to Adelaide.

This post was originally published in 2010. It has since been updated for accuracy of links and content.
I received a complimentary pass from Great Southern Rail for this journey.

As the minutes and hours rolled by, increasing signs of civilization became evident. One of the more impressive (natural) sights of the morning was Flinders Range, a beautiful row of mountains in the distance, and one of the “not-to-be-missed” sights in Australia according to many.

This being my third day, I now had something of a routine on the train: wake up around 7am, get dressed, and enjoy a cup of coffee in my cabin while taking notes and enjoying the view from my bed.

However, this morning, more of my coffee ended up sloshing around in the saucer and on the table than it did anywhere else. Although not uncomfortable, the train track south of Alice Springs was noticeably rockier than the track between Darwin and Alice Springs. This is because the northern part of the route was only complete in 2004 in comparison to the southern part which was (re)built in 1980.

An announcement came through just before my 8:30am breakfast that we were one hour behind schedule, but that it was expected we would make up this time over the next four hours. Considering on my train trip across Canada we were four hours late after the first 48 hours of travel, I was suitably impressed at the time we were making. I’ve come to expect trains to be generally tardy, but so far my Australian rail experiences had proved to be quite the contrary.

I was starting to get antsy about not having any internet connection for what seemed like ages, wondering how many emails were waiting for me, and what online chores I had to do. Only then did I realize that I’d only really been on the train for two days (the entire journey from Darwin to Adelaide is 54 hours).

I reveled in the feeling that this journey (which was coming to a close) felt both lightning fast and epically long. Although the whistle stops in Katherine on day one and Alice Springs on day two were wonderful, they interrupted the rhythm and pace of riding the train that I had anticipated…the marathon journey that I expected traveling from the top to the bottom of such a large country to be. Between the whistle stops, meals, conversations with fellow passengers, and receptions, there seemed to be relatively little “down time”.

When you board a train for a three day/two night journey, you expect to have heaps of time on your hands; you prepare for boredom to set in and bring various tools of entertainment to ward it off. I didn’t even need one of my boredom-conquering tools. Instead, I found myself wishing the trip was longer.

To that end, I look forward to my next train trip, which will be across the Nullabor desert to Perth on the west coast. That particular route doesn’t have as much in the way of whistle stops, and as such I expect to get into a different rhythm during that journey.

We pulled into Adelaide right on time at 12:30pm. I felt a surge of emotion when I got off The Ghan; bringing to an end a world-class experience that had been a desire of mine for years. There really is nothing like taking the train, in my books.

17 thoughts on “Train Travel: The Ghan from Darwin to Adelaide – Day Three”