Taking The Ghan Train from Darwin to Adelaide – Day One 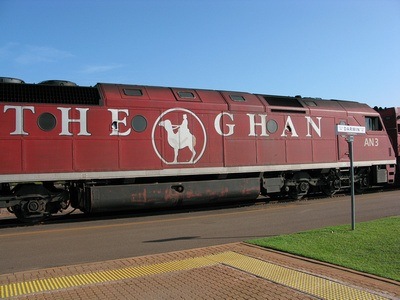 One of my motivations in returning to Australia for a few months has been to experience the world-class multi-day train journeys that venture through some of the most uninhabitable parts of this sunburned country. And The Ghan train is one of those world-class trains, also reputed to be one of the most luxurious. Lucky me: Great Southern Rail gave me a free rail pass to check it out. (I love my job).

The first of these train journeys that I’ve embarked on has been The Ghan; a three day, two night adventure from Darwin on the north coast through the Red Centre to Adelaide on the south coast. As the train travel evangelist that I am, this 54 hour, 3,000 kilometre journey was not to be missed.

After braving Darwin’s crocodiles and heat for a few days, I boarded the train. I was lucky to be traveling in Gold service, which meant I had my own private cabin and was served 3-course meals in the dining car throughout the journey.

This article was originally published in 2010, and has since been updated for accuracy of links and formatting.

Once acclimatized to the very welcome air conditioning after Darwin’s heat, I explored my cabin. It was the perfect size for one person; cozy but not cramped. (There are also twin cabins available for people traveling together). I stuffed my things into various compartments and went for a wander.

Speaking of which, wandering around on a train is an acquired talent. Although the gentle rocking motion of train travel is soothing, it can also make you look staggeringly drunk if your pace is out of rhythm with the sway of the train. I was grateful for the curved passageways in my carriage, which seemed to anticipate my stumbles from right to left and made me look like I’d been walking on trains for years.

Wait a minute: I have.

I took a seat in the posh lounge car and gazed out the window. There is something hypnotic about watching the world go by from a train. Every time I take a train trip I expect to be very productive with writing or reading, and instead I lose hours simply staring out the window, allowing my mind to wander with the terrain rolling by.

But of course, I wouldn’t have it any other way.

Outside of Darwin there was very little in terms of civilization. Four-wheel driving tracks revealing deep red soil appeared out of nowhere and disappeared into the void of trees and shrubs just as quickly. I occasionally caught a glimpse of a truck, its bottom half stained red from the sand kicking up. I wondered where these people were going, and where they were coming from; there seemed to be very little out there.

But I remember this sense of isolation in Lightning Ridge as well, and had I been on a train past The Grawin I might have had similar thoughts about the few residents who took to the roads.

Despite lunch being a three-course affair, the portions were perfect and I didn’t walk away stuffed. I shared a table with three elderly Australians (many of the passengers in Gold and Platinum service are retired, and for many of them this trip has been a long-standing dream).

Naturally, we chatted about travel.

“I might like to do a cruise some day,” chimed in one lady, while her husband nodded obediently. “Have you cruised before?” she asked me.

“Yes, I took a cruise through the Mediterranean a number of years ago,” I replied.

The husband snorted. “Hmph – not for me.”

“Which?” I asked. “The cruise, or the Mediterranean?”

“The Mediterranean. Who needs to go there? I’ll cruise around the south pacific, maybe to Fiji,” he replied.

Seeing that none of my lunch companions had ever left Australia (nor did they have any desire to), it was not the most stimulating of conversations for me. You can veritably spend a lifetime exploring Australia alone, and given its incredible remoteness in the world, it’s an option that many Aussies choose. But to regard the rest of the world with a disinterest that broaches contempt rubs me the wrong way.

No matter. One of the things I love about train travel is that you really never know who you’re sitting next to (as evidenced on Day Two of my journey – stay tuned), and getting to know them is half the fun.

A mere three hours after leaving Darwin we arrived in Katherine for our first “whistle stop”: a stop long enough for passengers to disembark and take a tour of the area. I chose to take a shuttle to the Katherine Gorge and do a hike on my own.

With its population of 11,000, Katherine boasts one grocery store, one Target, and a McDonalds opened just five weeks ago – which locals are thankful for because it saves them the three hour drive to Darwin for their fix. Of course, some locals also like to go to Darwin for regular “B&B Tours”, B&B standing for none other than “Beer & Bunnings”. (Bunnings is the equivalent of Home Depot in North America).

The original railway station in Katherine washed away in extreme floods in the 1990’s, and in 2006 further floods inspired all new houses to be built on stilts. They are anticipating severe floods this year (and we’re on the brink of the wet season), so residents are battening down the hatches in preparation.

If you haven’t already guessed, Katherine is a town of extremes, and the weather is no deviation from this theme. The temperature on this day was 38 degrees, and so humid that heavy sweating was inevitable and breathing was difficult.

On arrival at the Katherine Gorge and after dropping other guests off at their respective tours, my driver gave me a quick rundown of the hike. “Head up that path for 20 minutes to the lookout for great views. There’s a loop track, but don’t do it; it’s long, hot, and you don’t see much other than bush,” she said before bidding me adieu and reminding me of the rendezvous time and place.

But I rarely listen to sage advice.

The 20 minute hike up to the lookout took me half the time, and I had an hour and a half to kill. So what did I do? The full loop track, of course. I was reasonably sure I could complete it at 4km (which I usually do in under an hour), and with the sedentary train travel I was eager to get my blood flowing.

One hour later after heat-induced delusions of not making it back in time (or possibly at all) and being stuck in the stinkin’ hot Aussie bush battling for my life, I stumbled into the (thankfully air-conditioned) meeting centre. I was drenched in sweat and flushed in the face, having come dangerously close to full-on heat exhaustion.

The driver looked at me quizzically.

“I did the full loop,” I said, simultaneously defeated (for disobeying her instructions and paying a price) and victorious (for having survived).

She laughed and shook her head. “I told you not to! But I knew you were fit, and could probably do it,” she said, before telling me a few yarns about hikers who have been stranded out there.

Back on the train…

…and after a very necessary shower, I joined the welcome reception in the lounge car and met some more fellow passengers. Among them were Peter and Marie, a couple from Adelaide who drove to Darwin on vacation and were taking the train back home (their car was also on-board). It wasn’t until the following day after enjoying dinner with them that I was to discover just how much we had in common. (You never know who is sitting next to you on a train).

Although you can choose where you sit in the intimate dining car, with tables of four you always end up sitting with somebody. I somehow ended up with the same unfortunate trio from lunch, but at least they were in better spirits as we chatted about our day’s adventures.

After dinner I met Erica and Steve: two 30-something cousins from the UK taking an annual vacation together. Erica was drinking hard and flirting equally hard with the bartender, who did an admirable job of keeping Erica happy without leading her on. He later confided in me that he regularly gets hit on by passengers, but with a generally older demographic in the lounge car, it means a lot of ass-grabbing by old ladies.

Heading back to my room at the respectable hour of 11pm, I discovered that my seat had been transformed into a bed for me. After tucking in to the cozy bed, I was immediately lulled into a deep sleep by train’s comforting rocking motion. Sadly though, the train stopped for five hours (as scheduled) during the night; experience predicates that I actually sleep better on trains that are moving. But the only thing left moving this night was a little too much alcohol sloshing around in my stomach as I tossed and turned.

Stay tuned for Day Two and Three of The Ghan adventure from Darwin to Adelaide!

Editor’s Note: I received a complimentary pass from Great Southern Rail for this journey on The Ghan.