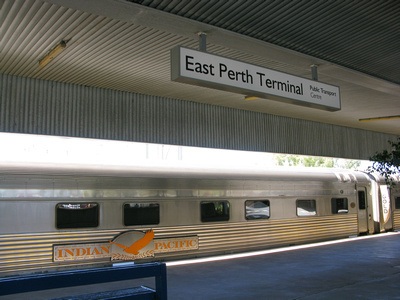 What a journey so far! I’m two/thirds of the way through my 11,000 km journey taking Indian Pacific train across Australia and back. After four nights on a train (with a night in Perth nestled in there), I’m still three days away from Sydney. And to my surprise, I’m still not bored.

In the other cabins, I’ve slept lengthwise along the train. In this cabin, I’m sleeping widthwise across the train. I wonder if this will adversely affect my sleep, but I find it to be about the same; occasionally restless and occasionally blissful.

This night, however, isn’t so blissful. A constant repetitive noise invades my dreams, taking the form of water sloshing against walls, or somebody washing and clanging dishes, or anything in between.

It’s only when I’m coherent come the morning that I realize the window blinds are making a small racket, clattering between the window panes. (Interestingly later in the day, the train maintenance manager comes by for a chat, and he asks if everything (from temperature to fixtures) has been satisfactory. I mention the blinds in passing, also saying that I’ll just leave them up from here on in to avoid the problem. But that won’t do; while I’m at dinner, he places spacers on the blinds so I won’t be disturbed by them again).

I enjoy breakfast with Sam and Helen (a couple in their early 60’s) from Melbourne. This is Sam’s first time in Western Australia, and he admits to probably being the least-traveled person he knows. “This trip has been eye-opening and mind-expanding,” he says of this journey into the unknown.

The conversation takes a curious turn when Sam says “Are you on Lonely Planet TV?”

I smile. “No. Do I look familiar?” It’s coincidental that I’ve just finished filming a travel tv show pilot episode and am about to shoot a full series; I know he doesn’t know me from tv fame (yet). I simply tend to look familiar to people, to the point where I’m often mistaken for somebody else. So I’m expecting to resemble the host of Lonely Planet TV as a result of this question.

Instead, I get a response that stings a little: “No, it’s not that I’ve seen you on tv. You just seem aggressive and positive like some of the Lonely Planet hosts are.”

I blink and ask Sam to repeat what he just said, which he does.

Aggressive and positive? I’ve never heard those two words juxtapositioned in such a way, and formulated in a sentence that’s not actually intended to be offensive. Yikes! Maybe I was too “aggressive” in asking them if I could join them for breakfast.

This particular meal-time conversation being something of a flop, we continue on to discuss innocuous things like the whistle stops the Indian Pacific train makes. I pass on a few of the facts and trivia I’ve gleaned through my journey so far, and Sam and Helen remark that I know more about Australia than they do! I blush and reply as humbly as possible that it’s a function of my job.

I wonder why I always feel a little strange when the train stops. If I’m looking out of the window, I would swear that we are moving backwards once we’re stationery. You get so used to moving forward all the time that not moving at all feels like moving backwards. It’s quite the trick of the eye (and inner ear).

Unlike the stop in Cook a few days earlier, today the sun is shining and perfect little white clouds are floating across the sky.

“Ladies and gentleman, welcome to Cook,” comes the announcement from the train manager. “The temperature is a comfortable 19 degrees, and we’ve got nice sunshine with some cloud cover. So in addition to the five people that live here, you’ll get a chance to meet a few million other inhabitants of Cook as well.”

A few million other inhabitants? I wonder…

…no I don’t. Flies. As I get off the train for the quick half-hour stop, I salute Cook with what I’ve dubbed the “Aussie wave”: a constant gesture of waving the space on either side of my face in order to keep the flies out of my eyes, ears, nose, and mouth.

Cook is an interesting stop when you’re taking the Indian Pacific since it’s one of the world’s most isolated outposts. It’s 1,100km from Adelaide and 1,500km from Perth, and although there are signs of once-formidable habitation, only five people remain here.

In fact, in describing the anticipated stops for the Indian Pacific to some of my Aussie friends, many had no idea where Cook was or why the train would stop there. Besides the point of interest of being such an isolated outpost and something of a ghost town (with a thriving gift shop, of course), it seems to be a stop more for the train than the passengers, as drivers change over and the train is refilled with water.

Back On Board the Indian Pacific

“I love your hair colour!” I say to a South African woman who I’d come to know as Cynthia. Her hair is a vibrant purplish-red, very similar to a hair colour I once donned.

“Thanks! It’s completely natural,” she replies with a winning smile.

“Really? Mine too!” I say of my dark purple base colour with blonde and red streaks throughout.

Cynthia and I share a lovely lunch together, talking about everything you don’t talk about with strangers (especially from South Africa), including politics, religion, race, and faith. It’s refreshing and uplifting conversation, and I see a kindred spirit in Cynthia. We both remark how we’re sure our paths will cross again, and we have enough faith to know that it will happen without our having to force the process.

As we chug back across this vast expanse of flat, largely uninhabitable land, I’m surprised at the number of signs of civilization interspersed throughout the desert. I’m also interested to learn of the Indian Pacific’s instrumental role in keeping these remote communities going.

“Ladies and gentleman, if you look out the left side of the train, you’ll see we’re passing through the town of Forrest, evidently not named for its abundance of trees,” the train manager announces over the intercom. He goes on to describe this town with a bustling population of two people who maintain the railway and refuel planes that need to land on the narrow paved airstrip. They even have a “bed and breakfast” for people who drop in (often literally) on them.

Towns like Forrest, Rawlinna, and Tarcoola wouldn’t survive well without the Indian Pacific, which not only occasionally drops off and picks up passengers who are enroute to these remote outposts for mining or other jobs, but the Indian Pacific is also responsible for delivering the mail and some supplies to these communities.

I mention to the train manager that I’m saddened not to see as much wildlife as I had expected. Not one wild camel has made an appearance for me and it’s not for lack of looking for them.

The train manager explains that usually the wildlife-viewing opportunities aboard the Indian Pacific are terrific, since the train drops moisture on the tracks along the way (grey water from basins and showers are expelled on the tracks). And through arid areas like the outback (especially through the drought that Australia has felt over the last 10 or so years), the train tracks are a great spot for animals to congregate and feed.

But this past winter has seen a record-breaking amount of rain, and the outback is uncharacteristically green. When I hear this I smile, since just about all I can see out the window is brown land, with a slightly green tinge only if I squint at it the right way.

So unfortunately for me (but thankfully for the drought-stricken land which has now been rained upon) there isn’t the abundance of wildlife I had hoped to see. I thank my lucky stars that I’ve already spotted a number of wedge-tailed eagles, few kangaroos, and an emu.

Today though, the closest sign to “wildlife” I see is a large rock at the side of the tracks with the word “GIDAY” spray-painted onto it. Who did this?! There’s no road in sight or sign of human life anywhere. Maybe those elusive camels have developed some extra talents in their years of living at large in the outback.

Dinner is a less-than-fulfilling experience with three ladies who are all traveling solo. The woman across from me opens the conversation with the endearing observation “You eat like an American.” This comment takes me off-guard, and I learn it is because after I cut my food with my fork and knife, I tend to move my fork from my left hand to my right hand to eat.

I don’t know if this woman intends her observation to be offensive, but she can’t seem to say anything without painting surly overtones onto each word. I make a humble comment about being taught good manners in this form before changing the topic.

But it’s not long before she strikes again: “So how are racial tensions in Canada?” This sets the tone for the rest of the meal. The two women across from me launch into a series of racial tirades that include comments like “The Pakistanis are taking over England! Taking over!” which is said with raised voices, spittle flying across the table, and lips curled. I’m then informed that immigrants to Australia have no business keeping to their own circles and should integrate fully, completely, and immediately upon arrival. Considering both these offending women are immigrants to Australia themselves and identify their original nationalities before their Australian residency, it seems hypocritical.

I gracefully leave the dinner table and the spiralling conversation when the topic turns to “African Americans. They aren’t even from Africa. Why do they need to call themselves that? Because their skin is black?! They’re just Americans!”

Aah….even disappointing dinners are fun. You truly never know who you’ll meet on the train. With not a dull moment yet (which is contrary to my expectations), I’m nearing the end of my eight-day journey on the Indian Pacific. Let’s see what tomorrow brings…

Click Here for Part Six of this epic Train Journey!