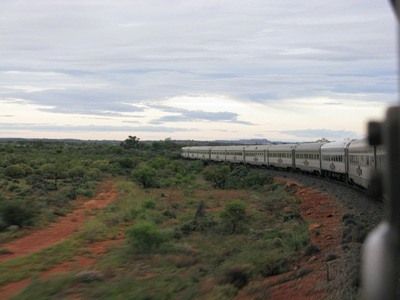 Thus far in this series, I’ve set the stage for my epic 11,000km train journey, boarded the Indian Pacific train in Sydney, explored my digs, and settled in for the night. I will wake up to Broken Hill.

Accounting for a half-hour time change back before bedtime, I awake (somewhat self-begrudgingly) just before dawn. Apparently catching the sun rise as we approach Broken Hill is a sight to behold.

I jump up and shower, pump down a coffee, and finally open my eyes only to discover that the sun rise won’t exactly be as spectacular as promised – due to the rain. Ah well; I take the opportunity to get some “early morning” shots.

I’m still bleary-eyed when we arrive in Broken Hill at 6:30am. After a short walk I discover the coffee shop I used to frequent when I was here before, and I grab a seat and reminisce about old times.

At the next table is a father and son duo riding their motorcycles across the outback. Similar to me, their trip isn’t about the destination; their destination having been somewhat arbitrarily picked as a far-flung turn-around point based on how far they could get in the five days they had off for the trip. I wonder as we part ways where they will stop next and what they’ll discover on their journey.

Heading back to the train, I have a closer look at the platform setup. There are four or five elderly women spread out along the platform, each sitting beside a table of souvenirs and handicrafts. As if intentionally coordinated in their efforts, their wares are almost identical, and they’re all quietly knitting while glancing and smiling at passers-by. It feels like a church bazaar.

A few more conversations with passing travelers and an article (meaning the act of having written one) later, we arrive in Adelaide in the early afternoon.

Having visited Adelaide once before, I have a vague idea of the layout of the city and I realize the CBD (central business district) is within fairly easy walking distance (20-30 minutes each way). So I strap on my walking shoes and head into the city, relishing the chance to stretch my legs and get the blood pumping on this hot sunny day. Given that I’m on the train for eight days, I must take advantage of every opportunity I get.

I cruise through Adelaide Central Market, a 135 year-old entity that is the largest fresh produce market in the Southern Hemisphere. After pawing mangos and watching the fish mongers auction off their wares to passers-by, I pick up some food to take back to the train for dinner, then meander through the CBD, intentionally taking the long way back to the train station.

Back On Board: Change of Crew

A new train crew has taken over for the rest of the journey to Perth (and back to Adelaide). All Great Southern Rail employees are based in Adelaide, and each train manager hires, manages, and works with their own crew. Each crew, in turn, rotates through the various train routes, all of which (for them) start and end in Adelaide. Almost as a family unit, each crew works, eats, sleeps, and even plays together while they’re on a trip.

I say this because the train crew is instrumental in the experience of traveling on the train, and you feel the shift when the crew changes. One train manager later tells me a story of how a passenger approached him enthusiastically, asking if he remembered the fellow and his wife. After an uncomfortable “ummmm”, the passenger tried to prompt his memory by saying they had met during his last trip on the Indian Pacific – seven years ago. In retelling the story, the train manager admits that he meets about 200,000 passengers a year; it’s tough to remember all those faces.

Regardless of whether faces are remembered, the friendly crew on-board the trains certainly play a part in defining the rail experience for passengers, especially when you are traveling in Gold or Platinum class (as I did on The Ghan, and do later in this trip).

In addition to the new crew, there is a glut of new passengers, such that my previously near-empty carriage is now full. There is a new buzz to the train as the new passengers settle in, many of whom seem to be couples and/or international travelers.

I’m not feeling overly social tonight, and there is a lot of time yet to get to know my new riding companions. I eat the dinner I bought at Central Market, do some writing, and hit the hay early, having been up since before dawn. The clocks change back another hour tonight, so I look forward to an extra-full night of sleep as recompense.