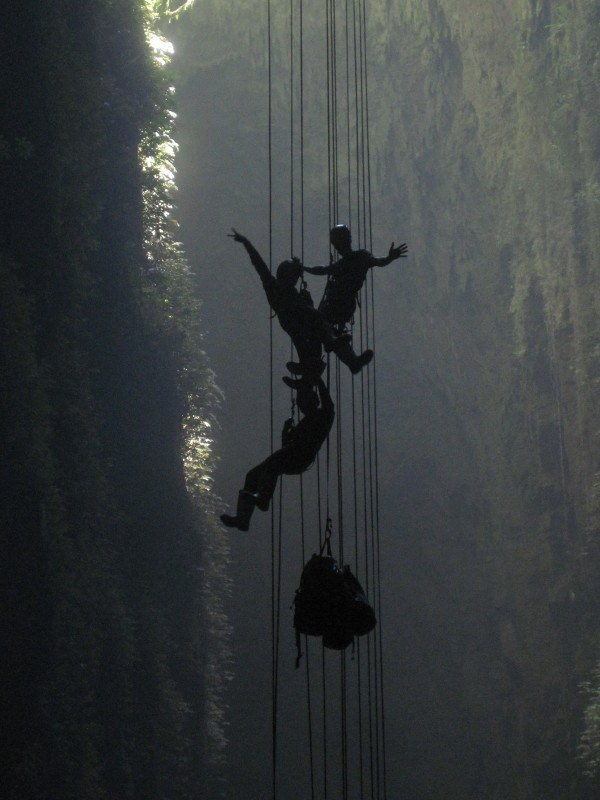 After a week of shooting the tv show Alive in Rotorua, we bade Heather of Destination Rotorua goodbye, but she still had a trick up her sleeve. She sent us to Waitomo for an “adventure” of unknown – and epic – proportions.

Waitomo is north of Rotorua and is known as one of the largest cave regions in New Zealand. And in typical Kiwi style, caving tours and adventures abound in Waitomo. You can enjoy black water rafting (which is glorified tubing – except in a cave), as well as various cave exploration tours – wet and dry, long and short. But in the typical style of our trip through Rotorua, we couldn’t do anything in small measures.

That is how we found ourselves at the doorstep of Waitomo Adventures, to discover that we were signed on for the seven hour “epic” adventure through a cave called The Lost World.

As had been done a few times before when rafting and sledging, we were fitted for wetsuits, booties, helmets, and gum boots, and were piled into a van (along with a couple from Taiwan who were on the tour with us) and taken to our final destination: The Lost World.

Access to The Lost World is on private land, to which only Waitomo Adventures has the rights for tours. In New Zealand, if you own a piece of land, you also own everything beneath it, and the owner of this property was smart enough to lease this special place out for tours – a great piece of residual income if you ask me.

At the staging area on the property, we suited up and walked out to the entrance to the cave. The Lost World was discovered in the early 1900’s by some explorers building a rail line. It was further bottomed and explored in the 1950’s. Part of the reason it took so long for people to get into the cave was because of access….it’s a 100 metre drop into the cave.

Which means we had to abseil (rappel) the same 100 metres to get into the cave ourselves. As the world’s highest commercial fixed line abseil, 100 metres was nothing to sneeze at. Having both caving and climbing experience, I was in my element – through and through, and this was already shaping up to be among the best adventures in my time thus far in New Zealand.

After the 20 or so minutes it took us to descend into the cave, we stopped for lunch. (What better place to eat lunch than at the entrance to a cave, you ask? I thought so too).

At this point we still had a fair bit of natural light to work with, so once we started to trek and scramble into the cave it got gradually darker. Within half and hour we were in total darkness, our headlamps our only guides through this rocky, wet cavern.

Speaking of water, we hadn’t gotten wet yet, and with wetsuits and jackets on, we were starting to overheat. We were thankful to get into the water, despite the breathtaking cool rush as it seeped into our wetsuits. Most of the time the water level was low and required little more than trudging through it, but at times we needed to swim – and swimming with gum boots (and not losing them) is no small task!

The terrain inside the cave was quite varied. At times it was as simple as walking along as we followed the underwater river, moving upstream. Other times, we had to scramble and climb up and down rocky ledges, small gorges, and waterfalls. And as with any cave, there were a few squeezes we had the pleasure of shimmying through as well. There were fixed ropes for us to clip in to when the footing was unstable or potential fall was dangerous, so at no point did I feel unsafe.

One of the bigger challenges was the jumps. On a few occasions we were required to plummet into a pool of black water about four meters below, hanging on tight to our knees so as not to collide with the bottom underneath the water. One, two, three: DROP! And one by one, from our precarious ledges above, we cannon balled into the water, emerged sputtering, and swam to the bank. To do this in full daylight would give anybody a bit of a rush. In complete darkness save for six headlamps – it was another experience entirely.

There weren’t many critters to share the cave with us. Our wildlife viewing was limited to three animals: spiders (of which there were very few, and unlike Australia none are venomous), eels (which were quite friendly, some of which ate bread from our hands if we were brave enough to feed them), and glow worms.

Glow worms are a big draw card for the Waitomo area, and many tours venture into easy-access caves purely for the opportunity to spot some of these…well…glowing worms. Although we saw a few as we scrambled throughout The Lost World over the five or so hours we were in the cave, we were told not to pay them too much heed; we would get a chance to really see some later.

And indeed we did. We must have known that we were close to the end of our cave exploration tour, because at one point we silently and collectively sat down on a comfortable flat rock and turned our headlamps off, letting the complete darkness envelop us. There above us on the cave ceiling was a sight that resembled a starry sky – so much so that I had to remind myself I was still inside a cave.

These pseudo stars were glow worms.

Now, as cute as glow worms sound by name, I have some bad news. They’re actually maggots.

And what glows, you ask?

Glow worms are actually interesting little critters. In the worm stage, they attract and eat insects and spiders with their sticky webs. And instead of polluting the cave with their poop, they actually burn it in their butts – hence the glow.

Eventually when they’re ready (or their butts can’t take the heat any longer – pun intended), they build cocoons and morph into little moth-like creatures. Once in this moth state, they don’t live long, and have one – and only one – task. They don’t even eat when they’re moths. What do they do?

After shagging all they can in their short remaining life span (what a way to go), they produce heaps of little glow worms to continue the cycle of glow wormy life, giving thousands of tourists each year a reason to check out their burning asses.

Once we had a bite to eat to warm up and replenish our electrolytes (because caving in this environment is tough on the body), we kept our lights off and followed the river upstream and towards an opening – and the daylight once again. 20 minutes later we were back at our staging area, smiling and congratulating each other on challenging ourselves and surviving this epic adventure.

One of our two guides had slipped away ahead of us while we gawked at the glow worms, and he already had steaks and roast veggies on the BBQ. He finished off dinner while we had warm showers and changed into our comfy clothes, then we all sat down to one of the best meals we had enjoyed in a long time. (It’s amazing after an exhausting adventure such as the one we had experienced over the preceding seven hours, how good food tastes).

Due to Kelly’s formidable caving experience, I was sad that he wasn’t able to see The Lost World with me. However, it is our hope that Waitomo Adventures will need some Canadian caving guides in 2011, because he’d be perfect for the job, and Waitomo seems like a great place to park ourselves for a short spell of adventure, abseiling, caving, and glowing butts.

Editor’s Note: This experience was part of a week-long trip organized by Destination Rotorua Tourism Marketing in conjunction with shooting an episode of the tv show “Alive”.