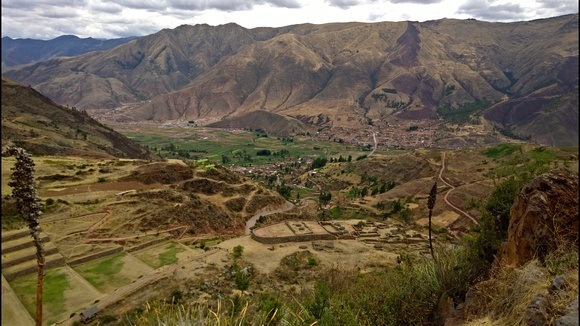 Considering I started off 2016 with the firm impression that I was setting up shop in Peru, the year played out very differently, and I ended up covering quite a bit of territory. Five countries and 30,164 miles (48,533kms) of territory to be exact. Although only one of those countries was completely new to me (Ecuador), in many of the countries I returned to (such as Ireland and the USA), I visited new places.

Come along for the journey! I’m recapping all that was 2016 for better and worse.

I rang in the new year in my cozy house in the Sacred Valley in Peru; a place that had been my home base for almost two years. I continued to work with my teacher as his assistant with plant medicine ceremonies. I also did a few excursions, notably to The Ruins of Tipon (A Marvel in Irrigation).

To make space for my shamanic pursuits, I was also in the process scaling down my online activities (and thus, income). Interestingly, I didn’t feel the pinch, and it inspired me to reflect on past incomes and lifestyles and write about Lifestyle Inflation (How Earning Money Sucks the Life Outta You).

From January through April, I was also running around like a decapitated chicken collecting and translating, notarizing, etc a dizzying array of documents required to apply for residency in Peru.

I won a trip to Ireland! Yessiree, I won a trip, through a random sweepstakes. The trip included flights, accommodation, and rental car for two people, departing from Canada. There was no contest in deciding who to invite; I took my Mum.

So I hopped on a plane from Peru to Canada to pick Mum up and off we flitted through Ireland for a week of incredible scenery, beautiful drives, a few pints, and lots of indulging in the melodic Irish accent – which is probably my favourite accent, and one I can’t help but imitate when I’m in the presence of it.

I returned to Peru with a(nother) suitcase of odds and ends to facilitate my “nesting” process there. Unfortunately, a surprising and heartbreaking turn of events awaited my arrival. The day I got back I was informed by my teacher/landlord/boss/friend that our arrangement was over. I had two weeks to move out, I lost all the efforts (and funds) expended to get my residency, and I felt pretty lost and confused.

Thus was triggered a massive process of healing for me, which lasted a few months. (Months that, with a dose of hindsight, flew by, but of course in the throes of it I was a total mess).

But I had people and angels alike looking out for me. I was offered places to stay, warm company, and lots of support. Knowing that I would soon be hitting the road again in a proverbially homeless way, I also needed to kick up my income again, and as if by magic, I was offered a new monthly column at Ingle International, in addition to my longstanding “Dear Nora” column on CreditWalk.

By mid-June, my Peruvian visa was running out, and I knew I had to cut myself loose from Peru in order to continue healing. So I left Peru, as well as my ideas of working with plant medicine, knowing that I would be led back to one or the other (or both) if it were meant to be.

I capped off my 2+ years in Peru with a hike to Mount Pitusiray with the first two friends I made with in Peru. It was a trip full of poetry, and a few tears shed amongst the three of us.

From Peru, I chose to “land” at the house of a friend I’ve known for over 20 years, who always keeps me laughing and with whom I can share anything. That friend lives in south Florida (Hollywood, to be exact), and two months with her were paramount to getting back on my feet again. I’m ever grateful to her for everything she did for me in that time, and for helping me see the levity in it all.

And as anticipated, my time in Florida was fraught with lessons and emotions – old and new. I was curiously amused at myself when I experienced many of the same core fears and challenges that plagued me (and most travelers) when I started traveling so many years ago now. Here’s a post about these challenges, as well as my quirky life in Florida: Hobo Update: Relearning Travel’s Inherent Lessons.

Before I left Florida I just had to stop in to meet the Anatomie crew (designers of my favourite travel clothing) and stock up on a few new pieces. Then, I returned to Canada to visit family and friends for a few weeks, and to celebrate my 40th birthday, along with my two oldest friends who were turning 40 at the same time. We did the spa, partied it up in Niagara Falls, and topped it off with some winery tours. We even got matching tattoos!

I arrived in Ecuador (a new country for me) in early September for a house-sitting gig, and I loved it. I was in Cuenca, which is similar to Cusco in Peru (but better).

When I wasn’t taking in the sites, foods, and pace of life, I was taking a hard look at my business in search some new inspiration. I participated in a daily challenge to get me thinking about these things, and out of it popped the idea to start a new video podcast (or vlog – a term I’m reluctantly acclimatizing to). You can learn more about what led me to this in my first episode, here: Stairway to Freedom.

My house-sitting gig ended mid-October, at which point I headed to a plant medicine retreat centre about an hour outside of Cuenca in the mountains. My introduction to the place was quite serendipitous, and it was a way for me to say “hello” to plant medicine again.

I participated in two consecutive retreats there over the next month or so, and was given countless signs that I was in the right place, and I was encouraged to pursue my shamanic endeavours there.

I also filmed and published my second popular vlog: Fun Facts You Didn’t Know About The Professional Hobo.

As November drew to a close, so too did my Ecuadorian visa. After almost three months in Ecuador, I gained a unique sense of the place. Overall I loved every part of it. But there were a few things that confused me about the place, which I wrote in a post called Cuenca Ecuador: A City of Confusing Contrast.

Before I left, I was invited to return to Gaia Sagrada in the new year to volunteer and help run the place. The shamans all expressed their desire for me to return and continue to work with them, which was heartwarming.

So after packing my stuff (See Vlog Episode 3: Travel Packing – How to Pack For Full-Time Travel), I said “see ya later” (instead of “goodbye”) to Ecuador and my new friends there, with intentions of returning in January on an extended visa.

Where to go for the 2016 holiday season? After the amazing time I had in Florida with my friend earlier in the year, the choice seemed easy. Back to Florida!

But I wasn’t just staying local this time; shortly after releasing my annual Giant Travel Gear Roundup of travel clothes/gear/services/books/etc I’ve tested throughout the year, I hopped on a plane to visit a friend in San Diego for a week, and another friend in LA for a few days.

The rest of the month was spent in Florida, visiting with a variety of friends from other lands who also thought that spending the holiday season in Florida was a pretty fine idea.

That’s a good question. At the moment, I’m still in Florida, but in a few weeks I’ll be returning to Ecuador to spend a few months (up to six) at Gaia Sagrada. I don’t know where all this plant medicine work will lead, but I also don’t need to know. I’ll stay there as long as it feels good, and I’ll move on when it’s time. I’m pretty zen about it at the moment!