The Peruvian Ruins of Tipon: A Marvel in Irrigation 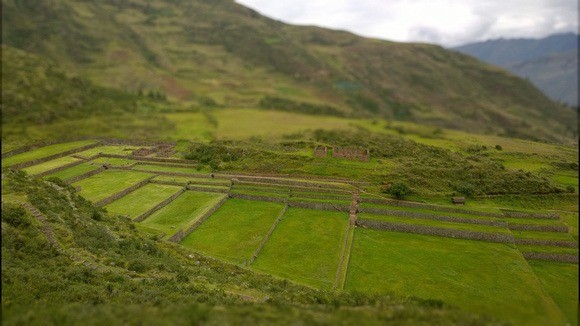 I’ve barely scratched the surface of Peruvian ruins and historical sites, which are scattered not only throughout the Sacred Valley, but the entire country. But I’ve had occasion to visit the Peruvian ruins of Tipon a few times, and every time I go I’m amazed at this infrequently visited marvel in irrigation, energy, and beauty.

Tipon is a 500-acre site near Cusco that is built around a spring. Although in many Peruvian ruins there is evidence of irrigation channels and constructions, Tipon is one of the only places where the irrigation system is still fully functional, with water flowing all year round (even in the dry season). In fact, Tipon has been touted as a masterpiece of water management, and the American Society of Civil Engineers has put Tipon on its list of International Historic Civil Engineering Landmarks.

The actual reason and historical use for Tipon is (as with many Peruvian ruins) not entirely known; it is surmised that it was constructed as part of a country estate for Inca nobility. Some of the finely cut stones and trapezoidal doors and windows imply an imperial air that was reserved for royalty.

Others suggest that Tipon was an agricultural lab (similar to Moray), since the many terraces of Tipon contain different micro-climates that would have been useful for testing various crops.

Others yet suggest that Tipon was a ritual garden, with the terraces constructed in a way that actually channels not only water, but also spirit and energy, from the surrounding mountains and springs into the crops that were likely grown on the terraces.

One of my favourite parts of Tipon, which to me illustrates how architecturally – and spiritually – advanced the Incas were, is this water channel pictured above. The water from its mountain source trickles down and splits into two channels (said to represent heaven and earth); then it splits into four channels (representing the four elements of earth, water, air, and fire), before being reunited into one stream again, pooling in a bath that would have been used in rituals.
See also: Learning to be a Shaman in Peru

Take Some Time to Explore

Although the ruins of Tipon aren’t nearly as extensive as Machu Picchu and others, there’s more to the place than initially meets the eye. Take some time to explore, and you’ll find a sun temple (Intihuitana) which is a key element to many important Peruvian ruins, and lots of different “rooms” or spaces that could have been used for any number of purposes. This secluded room pictured above for example, isn’t particularly easy to find, but looks like it has thrones cut into the stones.

Tipon: The Cuy Capital of Peru

Although there aren’t guinea pigs running around the Peruvian ruins of Tipon, the town below the ruins is famous for its cuy (guinea pig), which is a national delicacy. So while you’re visiting the ruins of Tipon, if you’re an adventurous eater, you’ll want to sample cuy from the area known as the cuy capital of Peru!

How do I Get to Tipon?

The beauty of Tipon is that there are hardly any visitors, so you’ll have the place to yourself. This also means that you won’t likely have access to a guide (as they don’t tend to hang around the entrance) unless you hire one in advance.

My best recommendation for getting to Tipon is to take a taxi from Cusco and ask them to wait for you. You can take the bus or collectivo for a fraction of the price, but then you’ll have to hike 5km up (and I mean UP) the winding road from Tipon town to the ruins (and back down again), which might leave you a bit pooped to explore the ruins themselves.

If you’re interested in learning more about various Peruvian archaeological sites and ruins, check out these posts:

The Pilgrimage to Huchuy Qosqo

Maras Salt Mines – Unlike Any “Mine” You’ll Ever See

6 thoughts on “The Peruvian Ruins of Tipon: A Marvel in Irrigation”