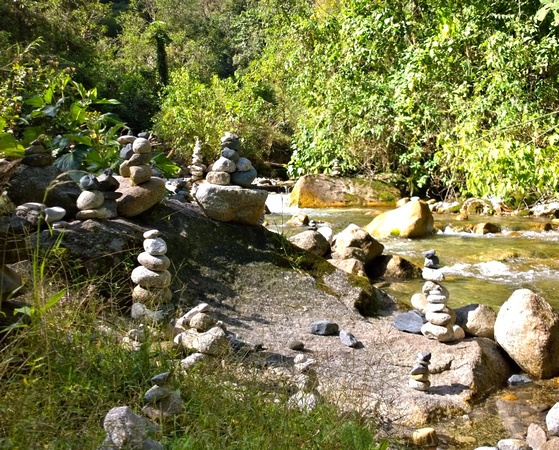 Travel’s Inherent Lessons. Instalment: July 2016. Those of you who have followed my journey in recent months and years will know that I had established a home and lifestyle direction in Peru that was everything I had ever wanted, and more than I could have imagined. The place, the people, the work…I could go on. (But I won’t).

So when all that came to an end, eventually necessitating my departure from Peru entirely, it left me, kind of…well…broken.

But I have indeed moved on from Peru, and you’ve been asking for an update, so here it is, in all its glory. Greetings, from Florida! Here’s what’s going on.

Although I’ve been a full-time traveler since early 2007 (almost 10 years!), in some ways this recent shake up felt like starting over again, and I’m wrestling with similar issues to what I faced 10 years ago; relearning travel’s inherent lessons all over again.

Minimalist that I am, I did some nesting (ie: accumulation of stuff) in Peru. So on leaving, I had to reevaluate what I had and get rid of a bunch of it. (See Also: How do I Sell Everything to Travel?)

This shit ain’t easy! I had fallen back into deriving (some degree of) happiness from having meaningful and pretty things around me (along with a wardrobe that far extends beyond the capacity of any suitcase), and I had to grieve certain departures as I made some tough decisions about what could come onwards with me for my unknown adventures.

Over the years I’d also lugged down to Peru a number of precious what-nots that I originally stored in Canada. Although I gave a couple of these babies away before leaving Peru, most of it got packed up and put back in storage (again). I must admit it was nice to have these items around me again, in a home setting. I chose my keepers well.

When I was in the throes of this process in Peru, I chatted with some full-time traveling friends. When I told them of these precious items from Canada that I somehow had to get out of Peru and store again, their response was simple.

I argued my case for keeping it, and they simply shrugged. I knew in a sense they were right; it’s so much easier not to tie yourself down with any stuff…anywhere. But I couldn’t do it; instead I crammed it all into one checkable suitcase and traveled with it to Florida, where I am at the moment. It will either be stored here, or back in Canada.

This sorting of stuff was also part of a process of choosing what would come onwards with me for my relatively blank full-time travel itinerary. And although I formerly prided myself on being a full-time traveler with nothing more than carry-on luggage, this task suddenly proved impossible.

I’ll be going into more about how and why this happened in another post about my new packing and luggage preferences. But in the nature of reflecting on the idea that I’m “starting over” with the full-time travel game again, it strikes me that this could be a repeat performance. When I hit the road in 2007, it was with a fair bit of swag. As I traveled I shed various items that didn’t serve me as well as I’d anticipated. And as I continued to establish my preferred style (and climate) of travel, I shed even more stuff, to the point that I could do it all with carry-on luggage only. If this is a repeat performance, then it stands to reason that even if I start with a larger load, I may well trim it down in time.

Years ago I coined a phrase that I still like to use today: The weight of your luggage is equally proportionate to your level of misery on the road.

2019 Update: The luggage I choose depends on the trip I’m taking, but on the whole, for long-term travel, I’m a fan of checked luggage. Here’s why, with a list of criteria that can help you choose the best (checked or carry-on) luggage for you.

Even as I commit these fears to paper, I see how ridiculous fear is. I will (as I’ve done so many times before, even optionally as with skydiving) breathe into this fear, listen to my gut, and make the leap.

Fear is good. We were born with it so we could survive, and not do something silly like walk off the top of a skyscraper. But fear is also to be measured and examined; if survival isn’t an issue, then the fear may be pointing towards another issue within us – one that could be dealt with by facing the fear head-on.

So that’s exactly what I’m doing. I’ve already overcome these fears in previous years, but it doesn’t make me immune to relapses. Unlike the first time around, I’m considerably more conscious and aware of what fear really means (maybe this shaman stuff did me some good!), and I’m being kind to myself while doing what it takes.

Being a Wife in Florida

Which brings me to where I am and what I’m doing.

I have a close friend of 20+ years who lives in Hollywood Florida (between Fort Lauderdale and Miami), and who I’ve visited numerous times enroute to here or there. Knowing I might need some time to decompress after leaving Peru, and since there’s no shortage of reasonably-priced flights from Lima to Florida, my decision was made.

I’ve been here for three weeks, and my friend and I have a great little routine. She’s the husband: she gets up and goes to work long hours. I’m the wife: I stay and home and do domestic things (in addition to working on my computer and moping of course). She even picks up flowers for me from time to time on her way home. When I made a comment about how I needed to complete the moping-house-wife look with some sort of silky flowing robe, one such robe was presented to me that night (from her closet; she didn’t buy a silk robe for me, no, that would be just creepy. She did, however, buy me red roses. That’s not creepy is it?).

So…I’m currently wearing my silk robe and writing this post.

If it was hard to get out of the house before said silk robe, it’s almost impossible now. At the moment, I don’t want to do anything. And you know what? I’m okay with that. I’m giving myself permission to convalesce for as long as I want to. I’m keeping up (and even getting a bit ahead) with my work. I’m eating well. I’m sleeping. I’m taking yoga and dance classes. I’m watching Netflix. And I’m continuing to heal my slightly broken self with kindness and self-nurturing. And I’m in a perfect place to do it, with both lots of alone time while my “husband” works, as well as a good dose of companionship with my friend who is a riot to be with.

But it means I don’t have any exciting Floridian pictures, discoveries, or recommendations. That’s not what being here is about for me; not this time.

Next month, I’m bound for Canada, back to my home town for a visit. I’ve been back there a bunch of times in the last couple of years, but it’s always nice to catch up with my family and friends, especially during summer. It’s also a particularly smashing summer to be in town, since my oldest friend will be celebrating a big birthday (hint: it starts with a 4), and given that I was born a mere five days after her, I’ll be celebrating the same milestone myself.

As of September I expect to be house-sitting in Cuenca, Ecuador for a couple of months. Ecuador is new to me and this situation will be a nice way of hitting the travel scene again after my period of convalescence. Once I’ve finished house-sitting, I expect to explore the use of plant medicine there and to see if I’d like to continue my apprenticeship in a different way.

Did I forget to tell you? Well, that would only be because it’s still being conceived; I’m working on the outline for a book proposal – the proposal alone I expect will take months to complete. Last October, I received a divine stroke of inspiration for the title of a book that I’ve been told by people for years I should write. It’s called This Ain’t a Travel Blog: Stories from 10 Years of Living Abroad That No Travel Blogger Would Publish. Okay, even the title might be a work-in-progress, but you get the idea. It’s going to be the real uncensored deal of what my last 10 years have been like, for better and worse.

Despite getting my divine inspiration last October, with my busy schedule in Peru it quickly became a back-burner item. If there was one good thing (and really, there are many) that has come out of my life in Peru being abolished, it would be that now I can write this book.

So, all this convalescence isn’t just about moping and wearing a silk robe. I’ve got work to do!