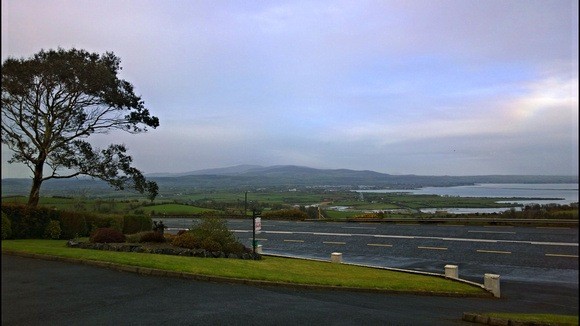 When I was 12, I won a box of chocolates. I was pretty happy about this.

And this year, some 27 years later, I won a trip to Ireland. Again, I was pretty happy about this.

I Won a Trip to Ireland

No really – I won a trip to Ireland! Last year, I entered a random online giveaway and promptly forgot about it. Imagine my surprise when I received an email informing me that I had won the trip!

The trip was for two people and included flights from Canada, accommodation, breakfasts, and rental car. The choice of who to take was obvious – who better to hit the road with in style than mee moom (which is “my mum”, slaughtered in the best Irish twang that phonetics can manage).

So earlier this month, I flew up to Canada, picked up mum, and off we went. Here are some of the highlights of our week-long trip of touring Ireland, with photos, curious bits of information, and recommendations if you’re headed to Ireland yourself:

I’d been to Dublin before, but this being Mum’s first time touring Ireland, we spent two nights there. She loved taking the hop-on hop-off bus, which is a great way to get a quick overview of any city.

Dublin has many worthy sights, including colleges, cathedrals, jails, parks, cool neighbourhoods, and of course, the Guinness storehouse. But because we were both jet-lagged from a sleepless overnight flight and short on time, we didn’t cover much territory. So instead let me entertain you with these random photos and facts:

This is Ha’penny bridge, which is the most photographed bridge in Dublin, and was named after the half penny toll that was once charged to walk across it. Now, it is considered the place to declare your undying love to somebody and/or to propose marriage. The city recently had to remove all the “love locks” that had been placed on the bridge because there was fear that the bridge would collapse under the weight. Ironically, Ha’penny bridge is located on Batchelor’s Walk.

This is Dublin’s Temple Bar district, known for its pubs and bars, shops, and happening nightlife. (Funnily enough, I inadvertently took almost the exact same quirky-street-corner-pub photos as the last time I visited Temple Bar, in 2010).

Lining the lampposts of Dublin were banners honouring the 100 years since the 1916 Rising, also known as the Easter Rising; an uprising organized by seven individuals that ended tragically, but that also was a major historical moment that marked the beginning of the journey to Ireland becoming a Republic.

The banners all said “Dublin remembers” – as does much of Ireland.

The Ring of Kerry

To experience the Ring of Kerry (or at least part of it), we stayed near Killarney, in the southwest quadrant of Ireland. The Ring of Kerry is a 179-kilometre circular scenic route that covers a variety of terrain including rural seaside villages, mountains, and more. There are plenty of nifty little detours from the route as well, such as the following:

The Gap of Dunloe

This mountain pass that basically cuts through the middle of the Ring of Kerry was recommended to us by the owner of our B&B, and ended up being one of the highlights of our entire trip, partly because it was so unexpected – and unexpectedly beautiful. After all of Ireland’s green hilly landscapes, imagine my surprise when we stumbled into this dark rugged mountainous land that sparks the imagination towards any number of fantasy shows and movies like Vikings, Game of Thrones, Harry Potter, and even Lord of the Rings – some of which are actually filmed in this area. Driving along the winding 2-way road barely big enough for one car was also a trip, and if there had been more time, I’d surely have done some hiking in the area.

You can drive to and around Valencia Island, which is just off the Ring of Kerry and one of Ireland’s most westerly points. It also proved to be another worthy recommendation of our B&B owner, with lots of lovely scenery and iconic coastal vistas.

The Cliffs of Moher

On the west coast of Ireland in County Clare, the Cliffs of Moher are the country’s most visited natural attraction. And they didn’t disappoint either; they stretch for 8 kilometres, are over 200 metres (700 feet) high at the highest point, and the next land mass (3,000 kilometres away) is Newfoundland.

Budget travel tip: Show up after 6pm and you’ll save the 6 Euro admission charge and the crowds, and catch the sunset in this gorgeous spot.

Later that evening while enjoying dinner and music at a nearby pub (see below), I got into conversation with some Irish fellows about the Cliffs of Moher. It went something like this:

Irishman #1: “Did you know that the winds are so strong at the Cliffs of Moher that they say you can throw a bottle up in the air and it will actually stay there?”

Irishman #3: “No way! You mean the bottle stayed in the air for an hour and a half?”

County Clare is known as the hotspot in Ireland for traditional Irish music, and Doolin is an example of a charming seaside town (very close to the Cliffs of Moher) where you can experience live music in one pub or another pretty much any night of the week.

An Irish friend of mine also recommended taking the ferry from Doolin to the Aran islands and to spend the night there, but we didn’t have enough time.

Oh yeah. We stayed in a castle one night as one of the perks of this free trip to Ireland. This is castle Dromoland, which is pretty darn swanky, and one of a few castles in Ireland that have been turned into hotels. Good thing we saved it for the end of our trip, because it really spoiled us. I awoke from the best night of sleep I’d had in months to proclaim that “I want to move into this bed”. Strangely, the hotel staff weren’t so keen on this idea.

Brigid’s Well (also spelled Brigit’s Well), located just outside of Kildare near Dublin, is well off of the beaten tourist path of Ireland, but was a worthy experience for me, as I have long been interested in the history and folklore behind the Irish deity Brigid (Brigit). She was revered and worshipped in ancient Ireland, and is associated in Irish folklore with the gifts of poetry, healing, nurturing, and fire. (She is also considered to be the female counterpart to Archangel Michael). February 1st is her day of celebration; it’s called Imbolc, and marks the beginning of springtime.

I knew that Brigid’s temple was in Kildare, but researching the right site (as in physical site, not website) to visit was a bit confusing since there are a variety of tributes to Brigid; this is partly because when Christianity came to Ireland, it assimilated features of older beliefs and practices and turned some of the deities into Saints – which is why she is also referred to as Saint Brigid. So she is represented in some cathedrals and in other spots, but for me Brigid’s Well was a dedication to the ancient Brigid, since the sacred use of wells long predates Christianity in Ireland.

I spent almost a month in Ireland in 2010, discovering the complex culture around booze and politics, as well as some natural wonders of the north such as the Giant’s Causeway. During that trip I searched for the best pint of Guinness – a brew I only enjoy drinking in Ireland.

So I was quite excited to return and be touring Ireland with Mum to get my Guinness on one more time….or rather a few more times…..and to compare pubs and locations in search of the perfect pour. I’m not sure we found the perfect pint of Guinness, but then again, any pint of Guinness…in Ireland…at a local pub…after a day of driving and sightseeing…with your Mum…is by its very nature – a perfect pint.

11 thoughts on “Touring Ireland in Photos”