Ireland: The Booze, and The Politics 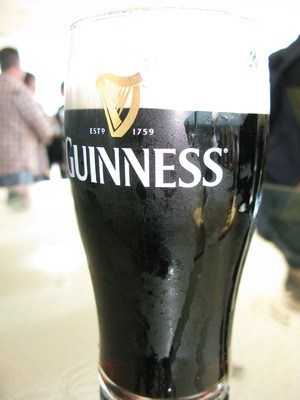 Give a pint of blood…and get a pint of Guinness! That there, my friends, sums up Ireland quite nicely (tongue in cheek).

This article was originally published in 2010, and has since been updated for accuracy of links and formatting.

Ireland seems to be a nation of drinkers. Similar to England, pub culture is prevalent…and in fact even more pronounced in Ireland. So my first task on arriving in Ireland was to find the perfect pint of Guinness.

I’m a dubious beer-drinker at best, and back in Canada the few times I tried Guinness, I thought it was a vile brew. But on the prompting of absolutely everybody I knew, I had to try this world-famous concoction – in Ireland, from the source.

My first pint was like drinking sweet liquid gold. Maybe it was the pub ambience, the company, or just the psychosomatic need to preach Guinness in Ireland as being “different”. Either way, I loved it.

Thereafter, I tried Guinness in various establishments all over Ireland. But strangely, nothing quite measured up to those pints I had at the first pub. Either the head wasn’t frothy enough, the consistency not thick enough, or the taste not sweet enough. Even my bemused local friends understood – they all have favourite places to enjoy their national brew, and few can be convinced that it’s the same stuff everywhere you go.

But be it Guinness, Jameson Irish Whisky, or any other drink for that matter – the culture around drinking in Ireland is ever-present. Check out the steady stream of crowds visiting the Guinness brewery in Dublin (drinking their pints as early as 10am in the storehouse which is – incidentally – in the shape of a giant seven-floor beer glass) if you need proof. It’s the subsequent tour of the Jameson Distillery at 11am that seals the deal…not that I’d know….no siree, not me.

I had the good fortune to visit my friend David for his birthday (which was incidentally, two days before mine). Plans were made to meet a group of close friends near his home town.

“So, who’s going to be at the dinner?” I asked David, in reference to our pre-pub dinner plans, which I assumed would include most of the gang.

“Oh, nobody. It’s just you and me.” When I shot him a funny look, he continued: “In Ireland, birthday dinners aren’t important. It’s all about the drinking afterwards”!

However as a visitor I was hard-pressed to see the differences between the two “nations” on first glance. There were no barriers, borders, or even road signs indicating the cross-over point. (More than once I got confused when the speed limits and mileage markers jumped dramatically – before realizing that it was not a jump in number, but instead a jump between miles and kilometers or vice versa).

It was only on receiving a few pointers including the history of Ireland that I became aware of the differences between Northern Ireland and the Republic thereof.

First off, I was quite impressed with the degree of openness I encountered towards discussing “The Troubles” (as Ireland’s violent history is officially referred to). Everybody – even people who were affected profoundly by the violence – was very candid with me about what happened; no holds barred.

I am not going to delve into Ireland’s history here, because as I learned, every time you think you’ve got the scoop, a deeper dive back in their history reveals even more clarity and perspective. Giving even a brief overview would be beyond the scope of this post.

What it took for me was a few weeks of talking to people from all kinds of Irish backgrounds, as well as an informative visit to Belfast’s (free) museum to paint my own picture of the place.

I also asked my Irish friends lots of stupid questions (like “are there Catholic churches in Belfast?”), and received honest answers (after they stopped laughing).

The best summation I received about current life in Ireland was a cautious one: “So…we have peace, but it’s still very new.” The last treaty was signed in the 1990’s, so I understand their cautious optimism. Small splinter groups still occasionally try to cause trouble, which keeps people looking over their shoulder – an instinctual way of life for many who grew up during The Troubles.

But most people truly seem to want peace; and anybody who grew up with the violence simply wants an end to it all. Londonderry (a city right on the border that saw some of the worst violence) is receiving a European tourism title next year, so lots of money will be poured into infrastructure. And because this is a cause almost everybody can get behind, everyone is holding their breath that peace in Ireland holds, and is in fact strengthened.

Northern Ireland still plays host to many Protestant-heavy neighbourhoods, evidenced by the British flags strung from every lamp post, and the red, blue, and white-striped curbs lining the main streets. And although many Irish say they can tell the difference between Catholics and Protestants on sight alone, these days most Catholics can stroll down one of these Protestant streets without being killed. (I just wouldn’t suggest they do anything really….Catholic – whatever that means…during their amble).

By contrast, in the Republic of Ireland there isn’t nearly as much fanfare around flags; just a general pride in and love for the homeland. A sure sign of being in the Republic is the evidence of Gaelic language; in fact on most street signs, Gaelic is listed first – English second. Lots of Gaelic has remained in daily vocabulary as well, which adds a certain charm to the conversation.

Although most of the Irish people I spoke to were curious about my full-time travel lifestyle, many of them couldn’t imagine not having a home base (in Ireland) to return to.

And who can blame them? Ireland has stunning countryside, and a warm, fun-loving, family-oriented population. Stay tuned for lots of pictures of my Irish countryside adventures – coming soon!

14 thoughts on “Ireland: The Booze, and The Politics”