Ireland: The Causeway, and Mamore Gap 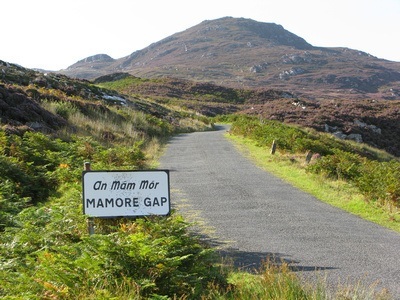 “So we have a bit of a hill to climb to get there,” was my only introduction to our imminent journey over Mamore Gap in Donegal. We were headed to my friend’s country home town for some boozy birthday celebrations, but having just arrived in Ireland I was still getting my bearings and had no idea in which direction we were driving.

“Wow – you weren’t kidding about the hill,” I said as I surmised the road leading persistently up and over the saddle of two heather-covered mountains.

But my friend didn’t slow the pace of the car as we struggled up the road. Sensing my mounting frustration at trying to snap pictures while we drove, he said with a bemused smile “Don’t worry, love. I think there’s a few spots to take pictures on the other side.”

Although I actively try not to set expectations of a destination I visit, I inevitably have some sort of image in my mind for how a place will look. Although the image is often realistic (as it’s likely based on photographs and documentaries), sometimes it’s not accurate to the area I’m visiting.

But when we drove over the saddleback at Mamore Gap, I saw just about everything I expected of Ireland: vast ocean, steep cliffs, heather-filled moors, rolling hills, country homes, grazing sheep, rustic agricultural scenery, and just about every shade of green to fill in the spaces.

No picture truly did the views justice, but you get the idea.

Here’s some more info about Mamore Gap, as part of the Wild Atlantic Way.

“Who built this thing?” is apparently a common awe-inspired (yet stupid) tourist response to the Giant’s Causeway, located in Northern Ireland. But who was I to surmise the true stupidity of these people? Maybe this ancient geographical wonder does look man-made.

Upon arriving at the coastal wonder that is Giant’s Causeway, even I had to pause to consider how the miles upon miles of hexagonal rocks could have formed as they did (hint: lava is an amazing thing).

But surely, this project was simply too much work; even for the likes of the Egyptians, Aztecs, and other ancient races with a knack for achieving the physically impossible with less tools than we could imagine cooking breakfast with.

No, this world heritage site is most certainly naturally made.

But there’s some cool folklore to go along with the Giant’s Causeway to perpetuate the mythical human creation element. It’s a story with many versions but an underlying theme that the Causeway once was a bridge (for giants) between Scotland and Ireland. The Irish giant named Finn McCool scared off his Scottish rival with his enormous size (or rather, the opponent’s imagined vision of McCool’s size), and sent the other giant running back to Scotland, ripping up the Causeway as he returned to ensure that no Irish giants could make the trip across and destroy Scotland.

I am regularly asked what my favourite place in the world is. I can never answer the question properly though, because amazing travel experiences for me have so much more to do with the context of the visit than the destination itself. Because I met so many Irish people filled with warmth, friendliness, and overflowing hospitality, Ireland spoke well to me as a place to visit. I couchsurfed with a few people I met while volunteering in Spain, visited a few city centres and many of the attractions, and most importantly I kindled a desire to return one day and set up shop for a few months to experience a slice of Irish life.

I just hope the weather holds!

3 thoughts on “Ireland: The Causeway, and Mamore Gap”