A Week-In-The-Life of Stephanie and John: HomeAway “Truckies” 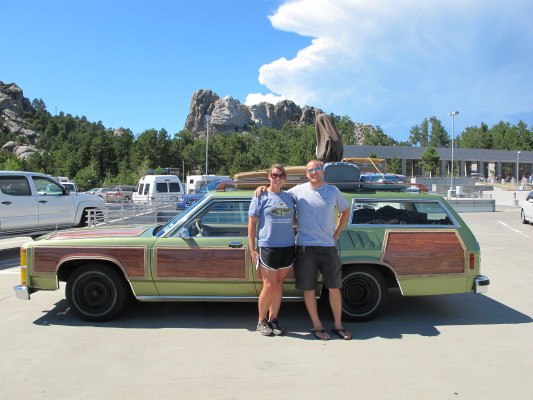 Stephanie and John recently traveled quite unconventionally; they criss-crossed the States (and a bit of Canada) for three months in a replica of National Lampoon’s Wagon Queen Family Truckster! They slept in vacation rentals under the sponsorship of HomeAway .com, and awoke most mornings to crowds of nostalgic fans ogling their iconic wheels. Here’s what a week-in-the-life of Stephanie and John was like!

Woke-up early this morning to find our vehicle vandalized! Someone taped graffiti to the fake wood paneling of the Truckster with black electrical tape that spelled out the words: “honky lips.” (It’s a reference to the movie.) We had to be on our way to the SeaFair FanFest at the Seattle Center that day, so we quickly snapped a picture and removed the evidence, but we were left with a mystery. Who was the vandal? <<For the time being, I was left to wonder, but you can read more about the “who done it” investigation that followed here.>>

At SeaFair FanFest we’d heard that Olympic speed skater Apollo Ohno was the parade’s guest of honor for the evening, so we spent the day talking to attendees and snacking on the free tortilla chips from the Cholula booth next to us while keeping our eyes peeled for the American icon. Though we never did spot the star himself, we were unexpectedly entertained by an organized flash mob that took place in the grassy area, right in the middle of all the festival booths.

10:30 a.m. Piled our stylin’ 70’s Samsonites onto the roof rack (no, they aren’t JUST props, we actually use the cases to store promotional materials like coozies and beach balls) and strapped them down with bungee cords for the short drive to the Columbia City Cinema. The local movie theater agreed to play a free screening of National Lampoon’s Vacation, so of course we had to make an appearance. Once movie-goers moved inside for the screening, we found a good parking spot and had an amazing brunch at a local joint – Geraldine’s. (I’ve learned to NEVER eat at chain food joints unless you need the occasional cheap fast-food fix because the BEST eats are the ones you’ve never heard of before and easy to spot with a line of locals out front.)

Later we drove to Seattle’s Alki Beach. Hilariously funny to watch as cyclists, walkers, and skateboarders crashed into one another due to rubber-necking past the parked Wagon Queen, trying to get a better look. Many incidents went something like this:

3. Person, flying past the stationary vehicle, still trying to place ‘why that weird car looks so familiar’ while mumbling “Wait is that the—“

Another early morning. The PR team at HomeAway generated some media interest from the local channel 13 FOX morning news show, so we made our way there so they could interview Jen.   They aired footage of our beautiful set of wheels to the city of Seattle, so we celebrated by plugging the Bihn Bags factory address into our GPS! We headed to the all-American travel bag manufacturing office where Tom Bihn gave us a tour of his facilities. It was a cool, behind the scenes look at how the products were made. Before we knew it, the time had come to drop Jen Miner at the airport. Her departure signified that of our own as we gassed-up the Truckster and headed out to Portland, Oregon.

4 p.m. Arriving hungry, we were ecstatic to find a dangerously delicious Thai food restaurant just three houses down the block from our rental. We had such an enjoyable noodle and veggie combination that we ended up here at least once a day for the remainder of our stay in Portland.

Portland is known for its mobile cuisine. The entire city is full of food carts that offer a wide variety of anything from Italian ice, to fish tacos, stir-fry or gourmet hot dogs and burgers. These carts are tucked away all over the city and surrounding areas in ‘pods’ (a group of food carts that typically share a communal seating area.) We met up with Boots-N-All writers and bloggers @italylogue and @whygo to try out the famed food cart scene and did not regret the amazingly cheap, authentic, and perfectly sized burritos we found in the Sellwood food cart pod.

We finished our day ‘on the clock’ by hunting down the two-story tall Paul Bunyan statue that came as a “must-see” attraction in Portland.

As Truckies, we work six days a week with a seventh “break day” reserved on most Wednesdays. It’s the special day of the week that John and I get the opportunity to make our own schedule and pretend like we don’t drive an obnoxiously large, 1986 piece of movie memorabilia. Naturally, this meant for John, my Truckie Partner, he’d spend his time eating Thai food, applying for life-after-the-Truckster jobs, and catching up on the ‘simple’ joys of summer: spending the day on the couch watching Jeopardy and Wheel of Fortune in shorts and a t-shirt while weighing the value of actually taking a shower. I took advantage of Portland’s claim to having more local and microbreweries than any other city in the nation – maybe even the world – by hiking to an environmental brewery called Hopworks Urban Brewery. It was delicious, it was organic, and it was just what I craved!

Drove past the lovely scenery of northern California, only to find ourselves pulling in to our next vacation rental.  Although only a one-night stop, it proved to be quite the experience. After some missed turns, I finally I found my way to the provided address and we were greeted by the friendly groundskeeper of the 15 acre ranch we were staying on. She led the way across a bridge to our rental for the night- a modern day yurt…and it was awesome! Made of canvas, with fresh eggs in the fridge for our next morning’s breakfast, this nature-lover’s escape came with satellite television, internet access and a swimming hole – what more could we have asked for except to stay longer?

Though one of the longer drives of our trip, today was full of success stories. John and I both experienced the Redwood Trees for the first time. In fact, we even drove through one! John fixed our blinker that started to malfunction (it would turn on but wouldn’t blink because we apparently blew the fuse). We even saw another epic salute to Paul Bunyan.

**Side note: I’ve noticed that Americans really like Paul Bunyan. Yet, not one person we have asked has been able to explain who he was or what he did or if he was ever a real person or simply folklore. On the journey we’ve encountered three Paul Bunyans– each one slightly larger than the last. At this point, we only have ten days left on our Great American Road trip, and I’m hoping to spot a fourth.**

Then we arrived in my favorite place on the West Coast – San Fran! We were feeling good and ready to experience the city. Plus let’s look at the stats: we’d only broken down once on the trip and it was only a minor issue, John and I didn’t hate each other yet and were already a solid two months in, and our team morale – Truckster included – was high. <<knocks on fake wood paneling>>

Stephanie and John are readjusting to a different pace of life while they ponder their next step. Check out their HomeAway Road Trip blog to read more about their adventures!

1 thought on “A Week-In-The-Life of Stephanie and John: HomeAway “Truckies””