Grenada Gets a Face Lift 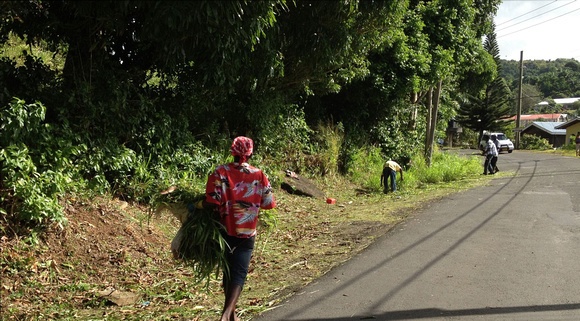 It’s autumn in Grenada, and the streets are getting wider.

In October, mornings become a greater hub of activity than normal. Shortly after the 6am sunrise, the narrow twisting roads throughout Grenada are lined with people clearing the foliage.

This island is so full of life that it overgrows everything if not tamed. It creeps up on you, and by the time the rainy season has finished, you don’t realize a blanket of green scrub has covered everything and significantly narrowed the roads. (The thick foliage decreases the line of sight around the many corners).

But October means the end of rainy season is nearing, as are the cruise ships.

So Grenada is on clean up duty. There’s work-a-plenty for people who are game for some manual hacking away and raking up of extra greenery around the island. The grass and scrub measuring up to five feet high is hacked with a machete (aka cutlass), then often trimmed as low as possible with a weed-whacker. Parks are cleaned up, as are the cemeteries, waterfront areas, and just about any public spot that’s green.

It’s hard work, which is why they start very early and finish before the sun becomes unbearably hot.

Speaking of heat, these cleanup efforts are for more than just the coming tourist season. The end of the rainy season means the beginning of the dry season, which brings increased risk of fires.

And having been caught in Australia’s worst-ever natural disaster – the Victorian Bushfires, I’m quite pleased to see these bushfire precautions being taken.

For all the efforts of the cleanup crew, the island has transformed before my eyes. Everything is crisper, cleaner, and with excess foliage trimmed back, I’m “discovering” little things that I never saw before. (Like entire houses).

Most notably, the streets are getting wider. With the roads as narrow as they are to begin with, gaining space on either side of the road makes the often tight squeezes with other cars a little more breathable, and the corners less harrowing.

With fresh perspective, and positive new regrowth popping through, everything – and everybody – just seems to be standing a little taller these days. Grenada just got a face lift!

Curious About Life in Grenada?

Grenada Addresses: My House Has No Number, My Street No Name

2 thoughts on “Grenada Gets a Face Lift”