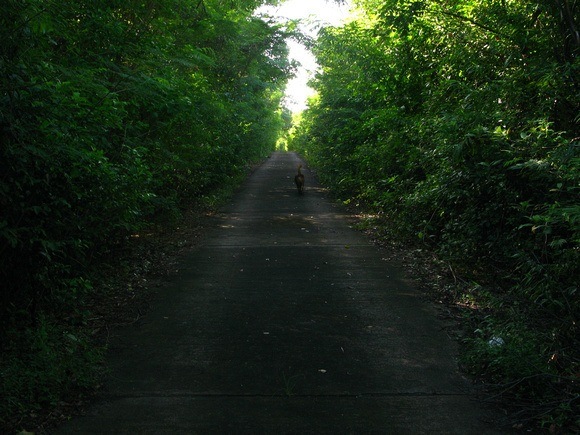 Driving in Grenada, I slam on the brakes. On the bank is a goat grazing dangerously close to the road. In front of me a driver stopped suddenly to chat with a friend on a road-side porch. In front of him is a wheelbarrow, inexplicably sitting on the road. In trying to manoeuvre around these obstacles, I skirt between a massive pot-hole with a muffler sitting in the bottom and the road’s edge (which involves a steep drop-off). Just ahead are more parked cars I’ll have to get around once I’ve let traffic coming the other way through. Adding further to the chaos, I plan to stop randomly at the side of the road myself to get some barbecued chicken.

Driving in Grenada is an off-road adventure, even when you’re on the road. A standard jaunt will probably result in your vehicle (at at least a few junctures) being on a highly vertical angle, navigating pot holes, broken concrete, and speed bumps that will take out the undercarriage of a car, and braking hard for anything from goats to buses to falling coconuts.

This post was originally published in 2012, and has since been updated for accuracy of links and content.

Having just come from the chaos of Vietnam and experiencing Saigon’s mad bike-filled streets, I learned that even among chaos, there is rhythm. And feeling that rhythm from the back of a bike in Saigon was one of the best preparations I could have had for Grenada.

It all boils down to “flow” (something I’ve often said encapsulates my attitude towards Grenada in general). In Vietnam, as well as Grenada, driving is about being alert to the possibility – nay, the probability – that anything can happen, and you just need to react to and move around it.

Here are some specific things you just might have to navigate and “flow” around while driving in Grenada. Put them all together on a short stretch of road and you’ll get a sense of the adventure!

You ain’t seen a speed bump until you’ve seen one so big that a regular car has to stop entirely and take it on an angle across the whole road in order to avoid scraping the undercarriage. These bad boys are not to be messed with, they’re all over the place, and they’re easy to miss at night.

Speed bumps are one of many reasons why the best vehicle to have in Grenada is a 4wd, or at least a jeep-style vehicle with certain “off-road” capabilities.

The roads in Grenada are reminiscent of some of the shockingly narrow roads I navigated in the south of France a few years ago. These roads which barely have any business fitting two cars side-by-side, also boast great views – which often means a sheer drop on at least one side.

You Can Park (Almost) Anywhere

There don’t seem to be any rules on where you can park. Need to stop somewhere? Then stop. Let’s just hope the guy behind you knows you’re stopping and moves around you instead of banging into you. But on a narrow roadway (see above), a parked car often also means only one car can get by in either direction. So be prepared to wait in line for cars to come through one way, before you can pass yourself.

Communicating With the Horn

A system of light double-toots of the horn seems to say anything from “hello” to “thank you” to “get out of the way” to “I just slept with your wife”. You know how it goes.

Potholes are everywhere, they’re often deep, and sometimes wide. One in particular that plagued me regularly was (literally) over 1.5 metres in diameter and at least 0.5 metres deep. And it was smack-dab in the centre of the road. This pothole eats cars. And considering the entire width of the road isn’t much more than 2.5-3 metres, this puppy didn’t leave much room to avoid it either.

With lush green foliage dotted with houses and small streets making up most of the countryside (which in turn makes up most of the country of Grenada), the roads bend and flex with the land itself, curving up, down, and around the mountainous landscape. And when the roads are as narrow as they are, you’re often forced to cautiously roll around the corner (with its uneven pavement and potholes), ever-watchful for a car coming the opposite way (ideally driving just as cautiously).

As a Canadian, if I see a highly steep road or driveway, my first thought is “how do they shovel and get up these roads when it’s icy in winter”? Despite not having seen winter for over five years now, this somehow remains ingrained in me.

But here in Grenada, you’ll turn up a nearly vertical road that looks more like an alleyway than a two-lane road. It might then degenerate into a pot-hole-ridden dirt path (which is still considered a two-lane road). These sorts of roads eat cars, and yet, they are thoroughfares.

At least there’s no snow to shovel.

Buses in Greanda are high-top minivans. Onboard there’s a driver (who drives), and a “conductor” who hangs out the window looking for people who need a ride, helps passengers to shift around to make room for new passengers or let off old ones, and collect the fare (which varies according to your destination). They’ll stop anywhere for anybody; just wave them down.

Now. If the bus has seats available, it crawls at a painful pace, beeping at everybody they see in the hopes of finding a fare. They’re also fairly easy to pass, and the driver will often stick their hand out the window to indicate that it’s safe to go around.

If the bus is full, they rocket through the countryside, taking the frequent sharp turns like they’re not the tall awkward minivans that they are. If adrenalin is your thing, all you need in Grenada is bus fare.

Stray dogs (of which there are many), cats, chickens, and goats tied up and grazing at the side of the road are frequent streetwalkers, requiring diligent attention. But don’t just watch for animals; quite literally anything could find its way into the road and make itself a hazard. Be prepared!

People laughed at me when I asked what the drinking and driving regulations are in Grenada. And with a local rum shop every few hundred metres, you’d better be prepared to navigate all the above hazards – in addition to other drivers – like a pro.

Putting it all Together

I love to drive in Grenada. Although it requires a sharp mind and ability to move around just about anything in a pinch, it’s also actually quite easy if you get into the groove.

Here’s a very short video that gives you a bit of an idea of what I’m talking about:

Update: I later bought a scooter and continued to enjoy driving in Grenada for the next year. However I eventually learned (the hard way) that this carefree (helmet-free) approach to driving in Grenada had a very dark side when I was hit head-on by an SUV at full-speed, likely by a drunk driver.

Over the remaining time that I lived there (another 10 months), I did manage to get behind the wheel and continue to drive in Grenada, but I will never again ride a scooter without a helmet.

13 thoughts on “Driving in Grenada”