Traveling on the Deccan Odyssey (Pt 3): Palaces, Caves, and Bollywood! 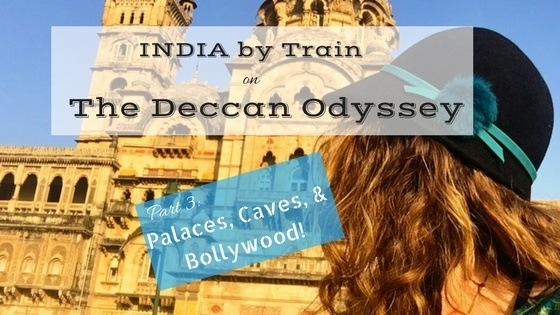 I’m not sure if it’s the Deccan Odyssey and its decadent ways, or if it’s India (and its decadent ways), but while on board this epic train ride, palaces were certainly a theme. In my last two days on the train, it was palaces, and caves. Oh yeah, and Bollywood. But we’ll get to that later.

Traveling through India on the Deccan Odyssey (the most luxurious train in the world) was akin to a dream come true for me. I’ve experienced (and written extensively about) long-distance train travel. But when I booked a mistake air fare to India on a whim, I had no idea I’d follow my cheap flight with such a decadent experience.

Because let’s get it right: I don’t exactly earn an income in keeping with a trip like the Deccan Odyssey, which is super-deluxe-luxury stuff. Although I’ve often said that financially sustainable travel is not synonymous with budget travel (some full-time travelers earn six figures; so they can spend accordingly), I’ll also admit that my current income is definitely not in keeping with this trip.

So it’s important to disclose that this trip was free for me, many thanks to Cox & Kings (India’s favourite tour company and the world’s longest-standing one) who actually owns the Deccan Odyssey train; some personal connections I made with the folks at Cox & Kings while speaking at a travel conference a few months prior paved the way to this experience.
2021 Update: Cox & Kings is out of business.

I may not earn a ton of money, but this job definitely has its perks.

Four Days on the Deccan Odyssey

My four days aboard the Deccan Odyssey train in India flew by. After boarding in Jaipur (halfway through it’s journey from Delhi to Mumbai), I spent the first day getting acquainted with the train’s many amenities while the passengers were out touring. The following day was a full one in Udaipur.

Unfortunately I awoke the following morning with a migraine so I missed the morning’s activities in Vadodara. Luckily everybody returned to the train for lunch and I was shipshape to join them for the afternoon visit to Laxmi Vilas Palace (the largest palace in India, and close to the largest in the world).

The following day, the morning was spent doing my absolute favourite thing to do on trains (lie in bed and watch the world go by); something I’d have liked a bit more of, but I’m in the minority in that club – most of the Deccan Odyssey passengers saw the train more as a means to tour around India’s destinations, rather than the train being the destination unto itself. (But I’m weird that way).

That afternoon, we visited Ellora Caves in Aurangabad; an extensive network of caves that have been hand-carved into temples of beauty, mythology, and acoustic grace. When we returned to the train for our collective last night on board the Deccan Odyssey, a surprise was awaiting each of us in our cabins: specially chosen traditional Indian outfits (saris for women) and a Bollywood party to attend! I’m not sure if my crazy Bollywood-esque moves impressed or horrified the guests and staff alike, but either way I was a great source of amusement for all.

Join me for my Last Two Days Aboard the Deccan Odyssey

This is the kind of trip that is best experienced through (moving) pictures, not words. Check out the video below to see the largest palace in India, catch me singing a song in one of the Ellora cave echo chambers, and kickin’ it Bollywood style to cap it all off!

Just in Case You Missed It…

Acclimatizing to India, In Jaipur

Heaven and Hell: Panchakarma as Reflected in (My Time In) India

4 thoughts on “Traveling on the Deccan Odyssey (Pt 3): Palaces, Caves, and Bollywood!”