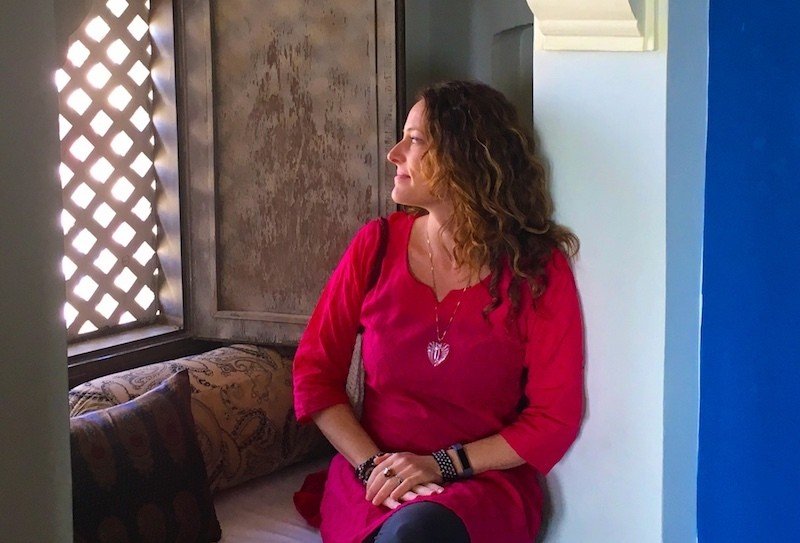 I was totally freaked out about traveling to India. People usually start describing the place with a long list of incredibly unsavoury characteristics (such as noise, dirt, chaos, touts, beggars, scammers, and more), followed by a dreamy far-away look in their eyes while saying it’s their favourite country ever. I didn’t get it, so I had to go. And my journey, started in Jaipur.

Prior to arriving in India, I read The Shadow that Seeks the Sun; a new release written by a guy who spent a chunk of every year in Rishikesh for a while. The book tackles some ambitious spiritual topics, but refreshing ones that made me fall even harder in love with the idea of visiting Rishikesh and finding some friendly local stranger with whom I could have spiritual talks on the steps of the holy Ganges river. (Spoiler alert: I ended up in Rishikesh and received quite the punch-in-the-gut (Indian style) on arrival, before relaxing into the place (a bit) and being a hermit for a two-week detox. More on that in a later post.)

I also watched a movie called The Shack on the plane to Delhi, which although not based on India, featured some concepts that would serve me well, such as releasing my idea of judging what is good and bad.

And lastly, I watched the movie Lion, which is simply a gorgeous movie (based partly in India) that made me cry. A lot.

Oh yeah, and for the record, Shantaram (set in India) is one of my top three favourite books of all-time. (Though a friend of mine who is all about India says there are heaps of books about India that are far better!)

So I figured I was on the best possible footing to arrive in India. In the spirit of dichotomy (something India is famous for), I recorded an anxiety-ridden FB Live Video the day before I left, before embodying a bit of zen and surrendering to whatever the place would be.

It didn’t hurt that after a hectic arrival and near missed connection, my first four days in India were spent at The Fairmont in Jaipur – the best 5-star hotel in Jaipur. I met up with an old friend and travel writing colleague (Mariellen of BreatheDreamGo) and we lapped up the luxury for four days of Fairmont ecstasy.

The Fairmont was a blissful experience, and I’m not just saying that because they hosted Mariellen and I for free; it’s a destination unto itself, and if you’re looking to ease into – or out of – India (or need a rest in the middle), I highly recommend this splurge – a splurge, which, all things considered is well priced for what you get.

But let’s get it right. Staying within the confines of the Fairmont’s delightful embrace was hardly the India I was braced for.

Acclimatizing to India in Jaipur

My acclimatization started while staying in Jaipur city (the Fairmont being about 20kms outside of Jaipur). Again, I had it pretty easy. Mariellen being familiar with Jaipur, selected the Bani Park area for us to stay in, because it is a quiet residential area but still accessible to everywhere. I hopped on Booking.com and picked Om Niwas which was decent enough for the money.

Looking for accommodation in Jaipur? Check out these deals:

A Note About the Cost of Accommodation/Living in India

One of my bigger initial surprises about India is the cost of things. I’d always been led to believe that everything in India is dirt cheap. Not so. (Like, at all).

Although India may be considered a developing country with some shocking amounts of poverty, it also has the world’s largest middle class, and it also has some of the world’s greatest wealth. The most expensive house in the world…is in India. The most luxurious train in the world…is in India (more on that next week). So, similar to Bali, India is a place where you can pay as much or as little for something as you wish.

Mariellen’s advice to me was to stick to accommodation in the 2,000-3,000 rupee/night range ($30-45); this was considerably higher than what I had expected to pay. Later in the trip I broke her rule a few times and didn’t suffer for it. But it’s wise to check out a place first (or book just the first couple of nights online so you can leave if it’s a dive); in many places I couldn’t find a particularly logical correlation between what you pay for and what you get.

On with my tale of acclimatizing to India. After a night in Jaipur together, Mariellen was on her merry way to Delhi, and I was left to my own devices in Jaipur. I didn’t cover off all the touristy sites as many people would do; instead, I went for a (very long) walk, to and through the Pink City.

You know what? It wasn’t so bad. The best way I could define the India (as I’d come to know it through a couple of days in Jaipur) is that it’s like all the little things you need to be aware of when you travel through other countries – like beggars, and touts, and scams, and crowds, and noise, and dirt – combined, and intensified.

If that doesn’t sound like a very good time, well, it’s not. But it does have a certain indescribable charm to it that’s probably responsible for the far-away dreamy look people get when they refer to their time in India. If anything, it’s exotic, and like nowhere you’ve ever traveled to before. That, I believe is the main allure for people who travel to and love India.

I’m going to cap my observations of India at this for the moment. I have much more to say, but all in good time. This story has an arc, and it must be followed. Stay tuned.

Please enjoy this short film of my long walk through Jaipur, to get a feel for the place.

Things to do in Jaipur

If you’re at all worried about traveling in India, then I highly recommend not only shelling out some decent cash for a nice place to stay, but also, to go on organized tours. You’ll learn a ton, and stay a million times safer. Check out what’s available to do in Jaipur below: