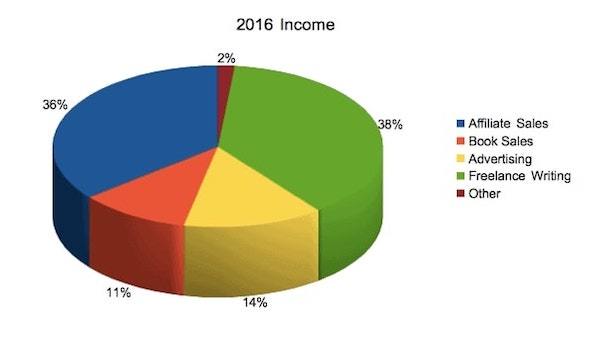 Each year I publish my own full-time travel expenses, as well as my income for the year. I do this not to set the bar for what you should earn or what you should spend in order to travel full-time in a financially sustainable way; rather – as the years go by and my own income and expenses vary – to demonstrate that there is no bar.

In fact, it has been pointed out to me a few times over the years that I don’t earn very much money. I know this, and generally speaking, I like it that way.

I don’t work huge hours (in fact, I’ve been tracking my time recently and it turns out I work a lot less than I thought!), and I have the freedom to work where and when (and on what) I want. My expenses are always in line with (and usually less than) my income, and so I’m never left wanting for anything.

But my paltry income is far from the potential that earning a location independent living can yield. My Financial Case Studies series profiles real people earning a location independent living around the world. Can travel bloggers earn six figures? Why yes, yes they can. And some even do it without working much more than I do (once their business foundations have been established).

So, I’m neither a shining example of earning a location independent living, nor am I any kind of failure. What I love about being an entrepreneur, is that it’s up to me to design my career – and lifestyle, and income – however I wish.

Without further ado, here is exactly how I earned my keep in 2016.

NOTE: My income was earned in a few currencies, namely US and Canadian dollars – all of which I’ve converted to US dollars here. Unfortunately, with currency fluctuations throughout the year, these numbers are approximate at best.

See, in 2015 I dropped most of my freelance gigs (to make time for my shamanic studies in Peru); but in 2016 when my life in Peru came to an end, I picked up another freelance writing gig that lasted through the year. I’m not yet sure what 2017 holds for me in the freelance writing department.

This is just a shade lower than 2015, with a steady 60% of my affiliate sales coming from Amazon. Given the vast repertoire of posts on my site (and others) that have affiliate links, this is my most passive form of income.

This is up about $1,000 over 2015. My advertising income tends to vary with the opportunities that come my way (since I’m choosy). However towards the end of the year I shifted from Adsense (which earned me a pittance) to another network, which looks like it will be considerably more lucrative going forward.

This is down almost $10,000 from 2015, which saw an income spike due to the big launch of Working on the Road: The Unconventional Guide to Full-Time Freedom. The book continued to kick out a nice stream of income through 2016 though, along with increased sales of How to Get Free Accommodation Around the World since I updated/redesigned/released the 2nd edition and reduced the price, and I also had an increase in kindle sales of Tales of Trains: Where the Journey is the Destination.

This number includes a coaching session, royalties from a Hollywood movie I filmed many years ago, and some income earned from assisting my (now former) teacher with some plant medicine ceremonies before I left Peru.

I anticipated the decrease in 2016 income for two reasons:

The latter affected my 2016 income the most profoundly. And I don’t think it will change much in 2017, since once again I’m wanting to have the extra time to dedicate to working/volunteering at a retreat centre in Ecuador for the first six months of the year (possibly longer if I like it).

I’ve also found a pretty happy place between income and expenses. As I wrote in my 2016 full-time travel expenses post, it seems that my “sweet spot” for yearly expenses seems to be around $24,000. So as long as I’m earning at least that, I’m golden. I can spend the rest of my time doing other things and enjoy the freedom I’ve earned with this lifestyle.

As far as my website goes, I’ll continue to post once per week. What has changed is that once a month I am adding video to the mix with my vlog about all things travel-related. Producing a video takes about a gazillion times longer than writing an article, with potential financial rewards for my efforts being long-term if at all. So this is a labour of love rather than business/financial savvy.

I may even scale back a bit on my freelance writing commitments in 2017, depending on how much time and energy living at the retreat centre requires. My expenses in Ecuador will be low, so I can afford the dip in income if it comes to that. Freelance writing represents an admirable chunk of my income, and it complements my website (and often affiliate income) well. But it’s mostly a matter of trading time for money, and I’d rather develop further passive streams of income.

I’m considering two mammoth projects (that will ultimately increase my passive income), but which also requires a monumental amount of time and money at the outset:

So on the whole, I’m taking 2017 as it comes. I’m spending the first six months in Ecuador at a retreat centre, with no plans or commitments thereafter. I’m open to new opportunities, and I’m in a flexible position to explore many avenues.

As they say in Spanish: vamos a ver – let’s see!

13 thoughts on “Earning a Location Independent Living: My 2016 Income”