Destiny is a Direction 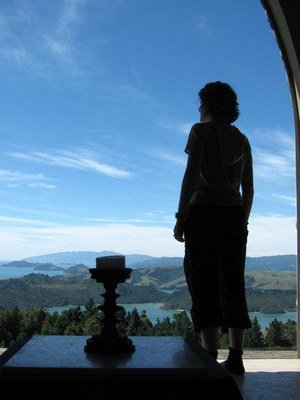 Destiny: There are a lot of unanswered questions in my life right now.

My return to Canada has emphasized this with the barrage of “Where are you going next?” questions. I don’t begrudge anybody who asks this question (or anything similar); I’d do the same thing in their shoes.

Pause, pause. “How long are you here for?”

“I’m not sure. Probably through August.”

Pause, pause. Confusion. “And you really don’t know where you’re going next? What are you going to do?”

Some people get it. After my initial response, a wide grin emerges, and they congratulate me, saying how exciting it is not to know these things (usually followed by some comment about how nice youth and freedom is).

Other people keep digging. They can’t accept that I don’t have a plan, or at least an idea of what I’ll be doing. These conversations are a test of patience (since I’m not entirely comfortable with the amount of unknowns in my life right now and it’s a challenge for me that I don’t always like to have poked and prodded), but more constructively – it’s a little insight into our society’s view of life planning and design.

This post was originally published in 2011. It has since been updated for accuracy of links and content, and includes a major update at the end.

There is a pre-made life design template that North Americans are born into; it includes growing up, getting an education, landing a good job, meeting and marrying somebody, buying a house, and having kids. Some people, after having completed this circuit of events, realize they don’t like their job/spouse/kids and turn everything upside down in the name of a mid-life crisis. We’ve come to accept the rash of 20-year marriage breakdowns and Porsche purchases as another step to this cycle of life.

But this pre-made life design template is rigidly antiquated, and many people are rejecting it for a more fulfilling lifestyle.

See also: How to Become a Digital Nomad

If we reject the pre-fab model we’ve been given, a host of questions arise about what we’re to do, and how, and where. And once we make a decision about that lifestyle and direction, it becomes us. We stand up for it because it’s different, and then we embody it as part of our identity – our destiny.

But what if that changes too?

When I was in the work force, I changed my career every couple of years. I’ve been a television producer/host, an assistant property manager, I’ve run administrative businesses, and I built up a successful financial planning practice (which I had for six years).

I usually found after a few years that my career choice wasn’t exactly what I hoped it would be, or that I craved a different form of stimulation.

But some people didn’t understand these frequent career changes. In their eyes, I started to look flaky for it. To this day, I still maintain that I was exploring options and looking for challenges. And in the end, many skills gleaned from each career helped me greatly in what I do now….these wildly different careers were actually complementary in the end.

Destiny as a Direction, not a Place

Destiny is a dangerous word, because it implies finality. “This is my destiny!” we claim from the highest mountaintop about the person we’re in love with, or the unique career opportunity we’ve been given, or even the crappy situation we’re in.

And even if the lover/career/etc. evolves into something we don’t like as much any more, we accept the hand we’ve been dealt with a shrug, simply acquiescing to “destiny” because, well, it’s destiny – you can’t change destiny, right?

What if Destiny was only a direction, not a fixed place?

Could destiny change? Can we allow destiny to be a series of checkpoints that guide us through life as opposed to being a final “destination”?

I have a friend who abhors the concept of fate. He believes that if there’s such a thing as fate and our lives our predetermined, then we really have no part in the choices we make. I too have trouble grasping the concept that we don’t have choice…rather, I think sometimes we have too many choices.

Passion is not Stationary

Passion can evolve. One year you might be passionate about singing; that could evolve from studying singing, to performing in musical theatre, to becoming an opera fan, to joining a band, and so on. Each modality of singing is very different, and although the initial passion for singing may not have changed, the form it takes certainly does.

Sometimes passion is even more erratic. Although I could draw some loose parallels between the passions I’ve nurtured in my life, it would be a stretch to do so. I’ve had varied passions, and I expect that those passions will evolve and change over time, and new ones will arise.

It is with this understanding that Destiny is a direction instead of a fixed place, and that passion isn’t stationery, that I can accept the unanswered questions of my current situation – which range from romance to destination to lifestyle. And it’s perfectly okay if my lifestyle changes along with my “destiny”.

When pressed with questions about my future, I often reply that I’m waiting for a giant beacon of light to emerge from the sky accompanied by a great booming voice which will tell me what my next move is.

But it’s actually true to a point. That great booming voice is my own inner voice – the one that speaks to me when I do a gut check. The beacon of light is an opportunity; all sorts of opportunities come to us each day, but there is usually one that really sings; that really feels right.

By remaining centered, and doing regular gut checks, we can all navigate these times of uncertainty. Because no matter who you are or what you do, nothing is certain. Giving yourself permission to change your destiny can be the greatest gift of all.

Shortly after publishing this article, my next step presented itself to me, and ended up being one of my greatest travel adventures: The Ultimate Train Challenge – 25,000kms of train travel in 30 days from Lisbon to Saigon.

From there I went to Grenada island in the Caribbean for a two-month house-sitting gig that evolved into setting up a home base on the island for two years.

After a life-changing accident and a house-sitting gig in Panama gone horribly wrong, I ended up in Peru where I embarked on a journey I never could have planned whereby I apprenticed with a shaman for two years before moving on to Ecuador and working with some other shamans for a while more.

I followed that up with a house-sitting gig in Japan.
Then a whole bunch of traipsing through Asia, highlights of which included experiencing both heaven and hell in India, then starving myself on the Thai island of Koh Phangan.

And of course, there’s more….but you get the idea.

24 thoughts on “Destiny is a Direction”