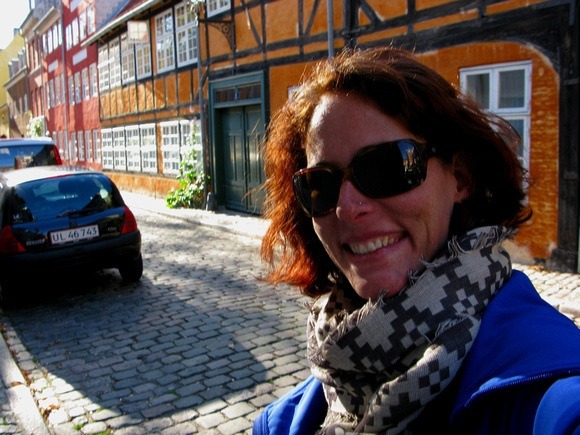 This post is part of the Club Carlson Global Traveler program; a 3-week, 8-country adventure I’m taking through Europe, paid for and compensated by Club CarlsonSM (now Radisson Rewards). During the trip, I’m exploring the world of hotel points and how to take advantage of accommodations and upgrades with various strategies (I’ve got a really good strategy today – read on)!

Copenhagen feels like a fairy tale. From the buildings that pop with colour, to the ornate architecture, the generally friendly people, and the idyllic bits of nature interspersed throughout, it stands to reason that it’s the birthplace and inspiration for Hans Christian Anderson’s many iconic fairy tales.

Seriously, people. This is a happy place.

All this happiness is due – like most of Scandinavia – to the fact that there is a strong social support structure, generally making its residents feel secure and safe in the knowledge that there’s a medical/educational/income/housing safety net in place.

But – again, like most of Scandinavia – it’s expensive. I suspect there’s a strong correlation; similar to Switzerland, the cost of living is very high but the income is generally commensurate. Once you’re “tied into the system” and earning in local currency you can live securely.

What to See in Copenhagen

Because I only had a day and a half to explore, I didn’t venture much beyond Copenhagen’s central area. It’s an incredibly vibrant and walkable place. Hence, the presence of Stroget, which is the world’s largest pedestrian shopping area in Europe. As with Glasgow’s Buchanan Street, I didn’t venture into any of the stores, but I enjoyed the vibe – especially on a sunny Sunday afternoon.

While wandering aimlessly (I can’t help myself; I love getting lost on city streets), I also saw bicycle lanes everywhere. It’s all very organized and easy to use; which is what coins Copenhagen as the world’s top city for cyclists. There are over 340kms of cycle lanes – and yes, it seems more organized and usable to me than even Amsterdam.

I also did a boat tour; something I love doing (dating back to my cruises on the Seine in Paris a few years ago and New York years before that), and it seems to be prolific in Europe; So far on this trip I’ve done boat tours in Amsterdam and Oslo (and I could have done them in London and Glasgow but ran out of time).

And although the boat tour guide (rightfully) recommended climbing the 400 steps up the spire of Our Saviour’s Church, the view couldn’t quite compare to the view from my 26th floor room in the Radisson Blu Scandinavia, Copenhagen. It’s Copenhagen’s first skyscraper (built in 1960), and remains the sole high-rise in the city centre.

If I had more time, I’d have ventured by metro to some of the other areas; I’m told Copenhagen is a collection of neighbourhoods, each contrasting and unique.

A Side Note: Consternation

Consternation – is the only way I could describe the look I got when crossing the street against a light. People just don’t do it. It reminds me of a Swedish friend describing the same thing in his home country: “It could be minus 20 degrees, 2am, snowing, and the streets could be empty both ways. But you’ll still see somebody standing at a light waiting for it to change!”

All these happy law-abiding people, living in the birthplace of fairy tales….there must be something to it.

So I’ve started waiting at the light too.

Here’s another quirky video featuring some known (and lesser known) things about Copenhagen:

Some of the larger hotels have multiple restaurants, and not all of them qualify for a discount with the Club Carlson Gold card (because they’re not actually the hotel’s restaurant). But: charge the meal to your room, you’ll still earn Club Carlson Gold Points®.

Moral of the story: charge everything you can to your room. You’ll get that much closer to your next free stay!