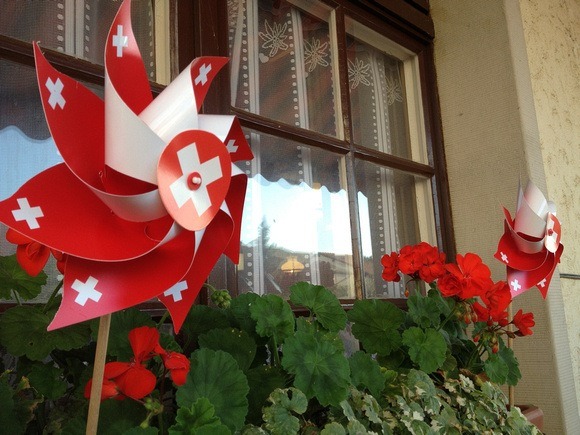 Given that my summer in Switzerland has come to a close, it’s time to share with you some random observations that – for me – makes Switzerland unique. This is the Swiss Life.

I may not have “conquered the country” and snapped pictures of the many postcard destinations Switzerland has to offer, but by traveling without moving for much of the time, I’ve had a chance to observe some of the finer aspects of life in Switzerland (which for me is a huge incentive for my full-time travel lifestyle). Here are my random observations of the Swiss life:

Okay, maybe it isn’t too clean, but Switzerland as a whole is impeccable, top to bottom. Even the tractors and farm equipment I’ve seen is polished to a gleam.

Two separate people who came to visit me this summer each remarked that they feel it’s almost uncomfortably clean….broaching on sterile. (I believe this is a backhanded compliment of sorts on their part).

I was first struck by the cleanliness of the water in Switzerland when I visited Lucerne and saw people swimming in the lake that Lucerne is built on. Even in Zurich, just steps from the central train station, people line the banks of the river that runs straight through downtown – sunning, picnicking, and swimming.

The river has a good current so people like to jump off bridges, drift along with the current, get out, and walk back up to the bridge for another round. Only suckers for punishment try to swim back upstream.

If the Swiss are clean on the outside, I think they might make up for it by being dirty (in a good way) on the inside. Sex shops and naughty bars are dotted everywhere (at least everywhere to my North American eyes) seemingly regardless of neighbourhood demographic; sometimes they’re next to toy stores, sometimes they’re set up as massive standalone warehouse-sized megastores. And browsing through the local classifieds reveals a fairly active culture with various types of clubs catering to the sexually liberated.

Despite Switzerland’s almost sterile cleanliness, a surprising number of people smoke. Even in Zurich’s main train station (which is fully covered and more an inside environment than outside), people chain smoke at the “meeting point” in the main hall.

Smoking is banned in most indoor establishments, but there always seems to be good compliment of smokers on patios. (This is lovely in the summer, but I wonder how many people suffer their addictions to the same extent during the winter months, since outdoor heaters are banned for their environmental unfriendliness).

Drinking in the City

Water fountains are all over Switzerland. Zurich has over 1,200 fountains in the city centre alone. Not only are they beautiful, but they’re all pumping out perfectly drinkable water. I love being in a place where bottled water is not necessary – or even popular.

Recycling is an Epic Task

As a very clean and environmentally friendly country, the Swiss take their recycling seriously. Unfortunately it’s a big chore; items are separated a million different ways (I counted 10 different kinds of recyclables), from different colours of glass to different types of plastic, right down to water filters), and although some of it is collected, most of it needs to be dropped off at collection points often located at grocery stores or train stations. Ironically, not every drop-off point allows you to deposit all kinds of recyclables, making the task of recycling even more onerous.

I suggested to a Swiss friend that such a labour-intensive convoluted system wouldn’t fly in many other countries, and I commended the Swiss people’s commitment to recycling. What’s the incentive? Garbage bags are pre-paid (and expensive), so the Swiss are consequently more predisposed (pun intended) to recycling so they can reduce garbage fees.

Garbage Gets Recycled into Power

Even garbage gets recycled, in a way. Switzerland uses an incredibly advanced form of incineration; one that emits none of the toxic fumes we associate with burning garbage, and actually turns the heat generated from the incineration….into power. Wow! Why isn’t the rest of the world doing this? The facilities are incredibly expensive to build, but with the power generation and reduction of need for landfill space and resources, I’d suspect it could pay for itself very quickly.

Let’s get on this, people.

See also: My Zero-Waste Kit for Travel (and Home)

You could probably get away with not using pre-paid garbage bags (although you’re subject to a fine if you’re caught). Then again, you could get away with riding the local train most of the time, parking for free, and any number of other tasks that operate largely on the honour system, with only periodic spot checks. The Swiss are not only clean and environmentally aware, but apparently well-behaved too.

I think of Zurich as a fairly large city, but the house I’ve been caring for (which is a mere 15 minutes by train from the centre of Zurich) is certainly in a rural neighbourhood. The house looks out on corn fields, and the occasional smell of cow poop wafting through the yard confirms that I’m most certainly in a rural area. I wrote about this rural/urban combo last year when I passed through during the Ultimate Train Challenge.

It’s the best of both worlds, since five minutes by car takes you to a nearby town with absolutely everything you could want (including, of course, at least two mega-sex-shops. I’m just saying.)

As a country/culture known for its fine attention to detail (hence their propensity towards banking and making watches as examples), it stands to reason that everything is incredibly efficient. If the train is scheduled to arrive/depart at 10:42, it will be at 10:42 on the dot. It’s refreshingly reliable.

I learned that the train drivers get a hefty bonus for being on-time; it’s a great incentive to keep the country running like (ahem) clockwork.

Although I was forewarned by many people that Switzerland is very expensive, I wasn’t terribly shocked by the prices here…except for the trains. Every time I get on the local train it costs over 8 Swiss Francs, which cuts deep into any traveler’s budget.

I guess you’ve got to pay for all that cleanliness and efficiency somehow.

Although this is not necessarily limited to Switzerland, their love of (and variety of) bread is noteworthy. Even local gas stations bake fresh bread – and at least five different kinds no less.

Although the common conception is that Switzerland has three national languages (German, French, and Italian), there are actually four – including Rumantsch (a Romanic language which only 1% actually speaks). German is by far the most commonly used (74%), with French and Italian spoken more in the South.

Each language has its own “Swiss” dialect which differs from standard German, French, and Italian, just to confuse things further.

Given all these different languages and dialects, it’s not terribly difficult to get around speaking only English, which seems to be a common denominator of sorts. Having said that, in the “rural” area where I’ve been staying, English is less common (especially among older folks). Asking for headache tablets at the pharmacy was a fun exercise in charades, replete with me hitting my head on multiple surfaces. (Hey. Go big or go home. I do have a flair for the dramatic.)

A huge portion of Switzerland is incredibly mountainous, and even if you aren’t in the mountains, you can probably see them in the distance. This beautifully clean alpine environment with rolling green hills and cows grazing (bells and all) really brings to life so many of the stereotypical images you might have of Switzerland. Check out this video to see (and hear) it for yourself.

Or have a peek at my latest Swiss Montage video, which includes the sights and sounds of both city and country life:

It’s Full of Pride and Culture

You don’t have to go far to see a Swiss flag; they’re everywhere. Heck, if I lived here, I’d be proud too.

And Swiss National Day in the mountains was full of national costumes and old traditions that I would have thought were long forgotten, but remain alive and well. This is a beautiful tribute to Switzerland as a country and culture.

The warm welcome I’ve had from everybody in Switzerland has been almost overwhelming. I’ve rekindled old friendships with Swiss people I met abroad, and formed new friendships with so many people – some as random as the person sitting next to me at a pub or on a train. The sheer number of strangers who welcomed me to Switzerland with kisses and hugs on Swiss National Day is a testament to the warm atmosphere that has made my summer in Switzerland a beautiful experience, and which has solidified my commitment to return…..someday soon.

Where to Stay in Switzerland

Accommodation in Switzerland ain’t cheap (which is why I love house-sitting), but it’s as efficient as the trains – which is to say extremely so. Check out what Switzerland has to offer here:

Things to do in Switzerland

I’m a big fan of taking (good) tours. It’s a way to cover a lot of territory, have cool experiences, and learn from a local. I learn so much about wherever I’m visiting by taking a tour at the beginning, then building out the rest of my experience at that destination based on what I learned from my tour guide. Here are some best-selling tours in Switzerland to consider: