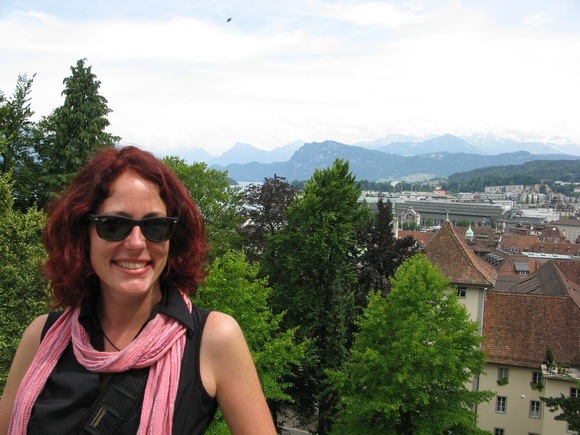 “Oh you must come to visit me in Lucerne!” my friend exclaimed over the phone, when we reconnected recently after last seeing each other at Mana Retreat in New Zealand, where we met over a year ago.

“Zurich is nice,” she started. “But Lucerne is beautiful.”

Indeed; when I took the train 50 minutes from Zurich to visit her while I was on a three-month house-sitting assignment, I discovered for myself that Lucerne is a picture perfect city. It’s a shame that the day was overcast, because in the sunshine, the Lake of Lucerne against the beautiful mountain backdrop with signature Swiss architecture all around would be quite a sight.

Nevertheless, I think you’ll agree that Lucerne in photos – even on a cloudy day, and in the hands of a mediocre photographer as myself – still pops.

The city of Lucerne is poised around the Lake of Lucerne, where you’ll find much of the action, with mountains that you could practically touch just behind.

Swimming pools are popular in Switzerland, but this swimming pool (and others, including one I saw in Zurich) has a twist: it’s actually the lake itself! Switzerland is so clean that you can swim in the lakes and rivers…even “downtown”.

How about a nice dose of greenery to add to this idyllic spot! I took this atop the remnants of the old city wall, which used to surround the area.

Lucerne’s Chapel Bridge is a wooden footbridge (the oldest in Europe) that is the pride of many who live here. The day it burned down in 1993 (destroying many 17th century paintings on the interior) was a sad day indeed; my friend says many people cried. Now restored, it is a main city symbol for Lucerne.

We ended the day with cocktails atop a central hotel. The views – and the company – was stellar.

I look forward to checking out more beautiful Swiss scenery and towns while I’m here; I have a feeling I won’t be disappointed.