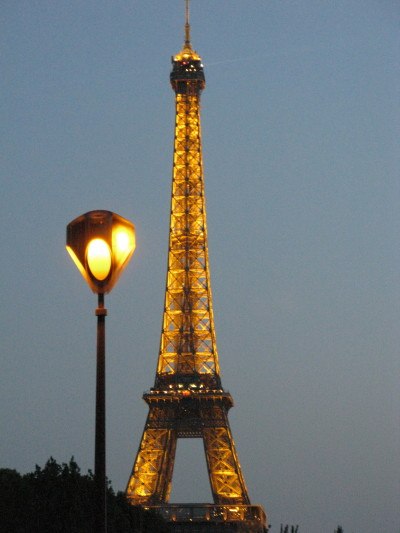 My time in Paris (as with many European destinations for this short period of my travels) was short and sweet. I would hazard a guess that you could spend the better part of a lifetime exploring the various nooks and crannies of Paris. But in as little as five days, you can cover a lot of territory if you wish. Here are some Paris highlights from my adventures:

My family doesn’t live in Paris however; instead, my Mum and her partner flew to Paris from Canada when they discovered that I’d be in Europe for the summer! It was a thrill to see them (since it had been a year since our last reunion), and even more so to travel with them.

We have family friends who moved (back) to France from Toronto a number of years ago and had been yearning for us to visit them. They have an apartment in Paris and a house in the south of France, so not only did we have knowledgeable “local” guides for our travels through France, but we also had a place to stay and some great companionship. And as I’ve said before, I prefer to choose my destinations based on where I have friends, because I find the experience to be more culturally (and emotionally) satisfying.

Lunch and a stroll on the Champs Élysées.

Even though the “Metro” subway system is quite sophisticated, Paris is best seen on foot. You can cover a lot of ground quite easily, and it’s a great way to soak up the culture (and a little bit of the rampant sunshine and heat we had during our visit). And the Champs Élysées is a great place to start.

The museums and art galleries.

I’m not much of a museum person. There. I said it. Please don’t hate me for it. But since I was with family, my personal style of travel (which involves heavy walking/hiking until I’m lost on city side streets or nature trails) needed an adjustment. Instead, we did more of the “touristy” Paris highlights, and I was surprised at how much I got out of the experience.

The Louvre was huge and served to impress me with so many of the world’s most famous works of art – both two and three-dimensional. **begin rant** (And yes, I saw the Mona Lisa. Yes, it was small – but not as small as I thought it would be. What bothered me were the teeming masses of people taking pictures of it – and everything else in the museum, despite explicit requests to the contrary – and preventing people from simply enjoying it. Do you think your crappy photo will come out better than the millions of prints out there you can buy for a few bucks? C’mon, folks). **end rant**

I was delighted at how much I enjoyed the Musée D’Orsay as well, which featured so much beautiful Impressionist and Post-Impressionist artwork. I got lost in the visions created by Monet, Renoir, Van Gogh, and Cézanne. Having seen so many of these images as prints, I felt a surge of pride and privilege in seeing the originals.

Dinner at a Michelin-rated Restaurant

For our first night in Paris, our friend took us to a local restaurant that rates very high in the Michelin guide. Yes, Michelin are the tire people, but they also provide restaurant and hotel reviews in major cities around the world, and in Europe are the most known resource for the best places to eat and sleep. And I can now attest to the fact that if a restaurant rates high in the Michelin guide, there’s a good reason why. We ate a meal to die for with white-gloved service and many a merci beaucoup from us.

Just about every trip I take with my family involves a boat trip of sorts. In New York city, it was a river tour. In Cape Cod, it was whale watching. In Muskoka, it was The Segwun. And in Paris, it was the Seine.

As with most water-based tours we’ve taken, this was not a disappointment. We chose a night ride and enjoyed dramatic lighting revealing many of Paris’s sights to behold, which of course, included the Eiffel Tower in all its lit-up glory. Every hour on the hour, the Eiffel Tower elicited many an “ooh” and “ah” as it lit up with sparkles no less.

I love food. And I love sampling local food. While volunteering in Spain, I developed a minor addiction to the chocolate croissants served at breakfast, known in France as pain au chocolat.

So of course, on arrival in France, I had to sample the “real deal”…many times over. A favourite breakfast routine for our entourage quickly became an exercise in sending me out to find a local patisserie or boulangerie and return with a sampler of croissants, pain au chocolat, and just about any other French delicacy that could be remotely justified as breakfast.

Unfortunately however, starting my delightful gastronomical adventures in New Zealand at Mana Retreat, continuing them with three-course meals in Spain, and further prolonging the ecstasy in France, I’ve gained a few pounds and my pants almost don’t fit. Future travels will involve a little more moderation in my enthusiastic sampling of local foods!