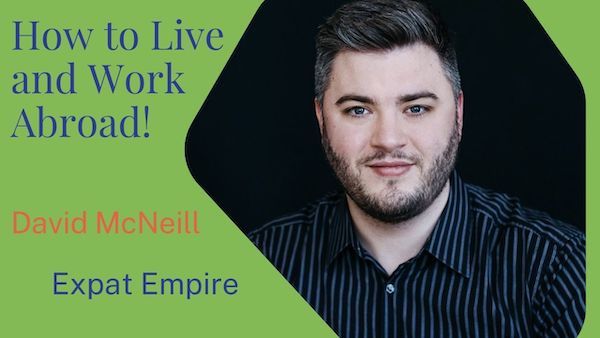 Remote work may be the new black, but it’s not everybody’s cuppa tea. If you want to move abroad but you don’t have the skills or desire to become a digital nomad, you still have options. David McNeill of Expat Empire shows us how to move abroad and get foreign jobs and become an expat.

Other Interviews to Check Out:
Living Abroad and Buying Property in Mexico, with Tim Leffel
Getting Residency in Montenegro with a Philippines Passport, with Kach Umandap
How to Get Your Own TV Show, with Rachel Rudwall, Rachel Roams

David McNeill as worked a variety of jobs in China, Japan, Germany, and Portugal, and has thus navigated the experience of relocating, getting visas, and experiencing expat life in multiple locations.

Now, as the founder of Expat Empire, David is inspiring people to move abroad and helping them do it. Originally from the United States, he has been living abroad permanently since 2014 and has traveled to nearly 60 countries so far.

David’s passion for living abroad was cultivated through his studies of the Japanese language beginning at the age of 12. He studied finance and Japanese at University and on graduating, he began his career in investment banking and then transitioned into software product management in the San Francisco Bay Area.

During his first product management role, he was offered the opportunity to work at the company’s Beijing office for three months, which reignited his desire to live abroad for the long term. Six months after returning from China, he received a job offer in Tokyo and finally achieved his dream of living in Japan.

After spending two years in Tokyo, David lived in Berlin for three years and has been living in Porto, Portugal since 2019. He started Expat Empire in 2018 to empower more people to experience the joys of living abroad. Expat Empire offers content such as courses, books, podcasts, blog posts, and events as well as personalized consulting services to support people in taking their next steps abroad.

How to Get Jobs Abroad and Become an Expat

In my interview with David, I grill him on getting foreign jobs and various expat dynamics.

Learn David’s Top Tips for Moving Abroad and Getting Jobs!

Going away for a shorter period of time? Here’s how to get travel jobs and work abroad for temporary stints.

2 thoughts on “How to Move Abroad and Find Jobs, David McNeill, Expat Empire”