Apu Nusta: How Failing on the Side of a Mountain in Peru was a Success 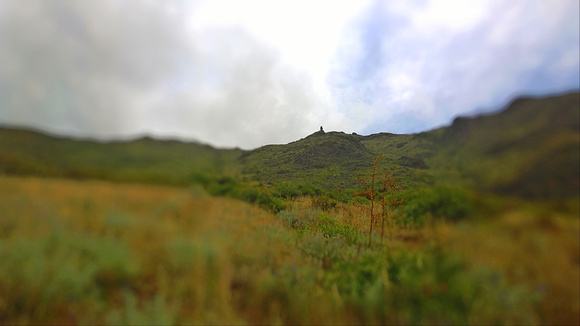 Apu Nusta: The Queen atop the mountain I failed to climb. Taken from my turnaround point.

Today, I failed. And it feels great.

It’s difficult here in the Sacred Valley of Peru not to get swept up in the opportunity for personal and spiritual growth. And given a rough year last year and a tough breakup that I’m still processing, I’m embracing this opportunity to face some fears and let go of the baggage that no longer serves me.

And on the side of a mountain, I was served some interesting baggage.

Every day I look up from my little home in the valley to Apu Nusta, one of the many sacred mountains in the Sacred Valley. Near the top, a natural rock formation sits that looks very much like a queen sitting atop her mountain. This is appropriate, as the Quechua believe this mountain is one of the few in the area with a female energy.

So when a friend of mine invited me and a few others to climb it, I was all-in. Despite my injuries from the big accident last year, my courage was boosted by my recent trek to Machu Picchu and I felt confident that this small climb would be easy.

Apu Nusta, The Mountain of Forgiveness

I should probably preface my tale of the climb by mentioning one teensy detail; I was ill with some sort of intestinal infection for a full week prior, and even on the day of the climb I was awake from 4am with gut-wrenching pain. So already, I hadn’t chosen a particularly forgiving day to attempt the climb, but as it was the last chance my friend Katya could do it before she left Peru, I persevered….as I always do.

Half an hour in, I knew I was in trouble. The terrain was steep and gravelly, the trail was virtually non-existent, and my injured knee and foot wrenched with each step.

Katya sensed my difficulty. “We stop for a break here,” she said, plopping her bag down and signalling to the perplexed guys above us that we were taking a rest. She took some coca leaves out of her bag to give an offering to the mountain, lit some palo santo (delicious smelling sacred wood essence), and we had a wee ceremony, as tears silently streamed down my face.

“I used to be able to do mountains like this in my sleep,” I said, looking up at the peak looming above us.

“Si, claro,” Katya said. “But this mountain is a journey. She has a lot to teach us.”

Half an hour of climbing later, I was lagging and again evidently in distress. The mountainside, covered in cacti had initiated me with pokes and pricks all over, and my exposed ankles (from pants that were a wee bit too short) were already swollen from the thick brush, my shoes filled with cactus needles. My pants were also covered with cactus needles that stuck to me and poked me with each movement. I seemed to be the only one made of cactus velcro, and I wondered if this was a sign.

We stopped again, all together. We spoke of gratitude, played a favourite song on Katya’s iPod, and ate a snack. Tears again silently streamed down my face as I mourned the mountaineer that I once was, and was obviously not able to show these friends. The rest of the group was silently supportive.

“Apu Nusta is the mountain of Forgiveness,” Katya said.

I reflected. The trail (if you could call it that) thus far hadn’t been particularly forgiving, and I knew it would get much more difficult. This was to say nothing of the way down, which I knew would be an even bigger challenge for me. I reflected on what forgiveness is.

“I think,” I said tentatively, “that indeed this journey today is one of forgiveness. That is, for me to accept my inabilities and forgive myself for failing to reach the summit. You guys go on with out me. This is my summit.”

Whoop dee doo, you might say. You didn’t reach the top. So what?

Thing is, I’ve never really failed at anything before. I face fears head-on, and persevere, often despite the odds. I’ve been a competitive skydiver. Raced motorcycles. I sailed the Caribbean for three months to conquer my fear of the ocean. And I’ve climbed a lotta mountains, always quelling that inner voice that inevitably comes up at some point and says “what the hell are you doing? This isn’t fun.” I’ve rappelled 60 metres into dark caves and generally scared the crap out of myself.

“I suppose you’re a lifelong member of the fiercely independent North American women’s club,” said a shaman friend to me recently. He loves to challenge me and press my buttons, and said this in the context of my iron grip on some personal issues I’m trying to let go of.

“Yes, yes I am,” I said, with equal parts pride and shame. My determination has served me many times in life before, but my lack of self-kindness has not.

So in this moment, part way up Apu Nusta, the mountain of forgiveness, I decided to forgive myself, to not care what the others may think of my ability (or lack thereof) to do the climb, and I excused myself for the day.

“Okay, bella. Be careful on the way down,” were Katya’s loving parting words as the rest of the group continued upwards.

And suddenly there I was, on the side of a mountain, alone, a little scared, and facing my failure.

But instead of this failure feeling bad, it felt good. I had been tortured with pain, indecision, guilt, shame, frustration and a variety of icky feelings as I struggled upwards, somehow knowing that I wasn’t meant to climb Apu Nusta on this day. Once I accepted myself and was ready to call it a day, I felt good – despite having to find my way down the non-existent trail by myself.

I even enjoyed my downward trek from Apu Nusta. I stopped regularly to enjoy the view – views that I had somehow missed during my inner struggle on the way up. I didn’t have to keep pace with anybody. I took pictures. I even sang a little.

At one point I was surrounded by white butterflies flying all around me. I stopped to admire them, and they all disappeared, landing on nearby foliage and closing their wings, camouflaging themselves amongst the cacti. As I walked again, they flew with me.

And then, I met Tania.

Almost back in Pisac, I ran into Tania coming the other way. This tiny little girl was climbing up, by herself. I was smitten by her round cheeks and shy but curious look, and I stopped.

In Spanish, I asked her where her parents were. She pointed down the trail, and I assumed they were around the corner, on their way up. Some part of me felt compelled to protect her, or to wait with her for her parents. I broke the ice with my camera, as we took a bunch of “selfies” which she enjoyed.

I learned that she is five years old (but looked three), has two brothers (four-year old twins), and then we discussed the colours of her clothing. My primitive Spanish was sufficient for her, and hers for me – a good match.

After ten minutes or so, her parents were still nowhere to be seen. An older boy passed on the way up, said hello to Tania by name, and continued upward. I wondered where these children were going; there wasn’t much above us other than abandoned (?) house.

It was eventually time to take my leave; there was little to go wrong up here, and I felt fairly sure that she knew where she was going and had somebody to look after her somewhere close by. A further five minutes down the trail, I passed by her possible mother and father, exchanged quick hellos, and moved on.

This brief little interaction with a local Pisac girl touched my heart. It’s difficult to get close to locals in Pisac, and this experience was very special for me.

Had I not failed to climb Apu Nusta, I would not have had such a brilliant success. A success in finding my own way down to the eventual trail, a success in enjoying my own little retreat on the side of a mountain, and a success in meeting the adorable Tania.

And most of all, the success in forgiving my injuries, and for not being the “superwoman” I might once have been.

And my friends understood. All the unspoken angst and fear of disappointment was for naught. They called me a few hours later from the summit, and I waved to them from my yard. I congratulated them for their success….and they congratulated me on mine.