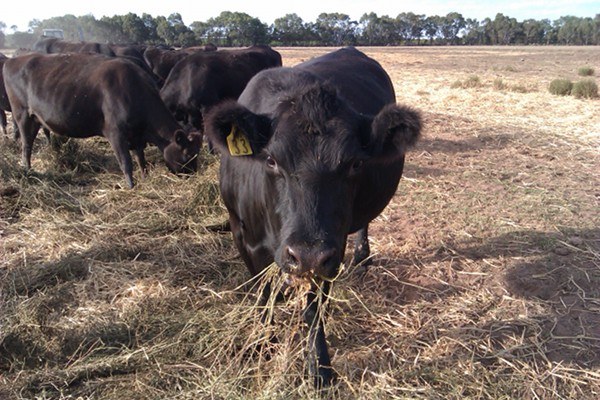 Steven Sirski is a freelance writer, musician and filmmaker who has spent the last four and a half years working and travelling all over the world, including South Korea, Ukraine and Australia. Please enjoy this week-in-the-life of Steven in Australia, working as a farm hand.

In order to acquire a second working holiday visa in Australia, backpackers and other travellers need to commit to 90 days of rural work. My first job was on a farm in South Australia that included a vineyard, livestock and some hay cropping.

7:00 AM – Meet boss and receive the day’s assignments.

7:30 AM – Get hay bales and feed the cows. Clever animals. If I’m not quick enough to get into the paddock, they catch a whiff of the incoming hay bales and block the gate. As a result, I can’t drive in.

Instead, I park the tractor with the hay bales on the opposite side of the paddock so the cows will follow the scent while I open the gate, then quickly drive the bales into the paddock and try to cut the strings off before Mr. Bull shows up to make his presence known.

10:30 AM – Load hay bales for customer. Although it doesn’t sound like much, hay is big business in Australia so, if a farmer can, he’ll put in some hay crops as another source of revenue.

11:00 AM – I get to drive the “slasher,” which is a fancy word for a grass cutter. The grass in between the rows of vines is getting longer and could cause problems during harvest. I’m sent out to trim it down.

7:30 PM – Head to the pub. The cook and horse groomers have the day off so that means the men (me and my boss) are on our own for dinner. He eats leftovers while I go to town. I take the ute (utility vehicle) which I’m still learning to drive (it’s standard, I’m used to automatic!)

Once at the pub, $15 buys me a very nice serving of roast pork followed by apple pie and ice cream. I’m content.

8:30 AM – Help boss shift irrigation pumps. Since the farm is located so close to the lake, my boss installed an irrigation system to water his paddocks (including his polo field).

10:30 AM – Me and another worker are sent out to clear an old vineyard of debris, including fence posts and vines, so that a new one can be planted. We snip the wire from the fence posts and separate the good, re-usable posts from the damaged ones.

During this job that we have our first encounter with one of Australia’s deadliest creatures: The Red Back Spider! Despite the stories surrounding the insect, it’s surprisingly small and could have easily been overlooked. My workmate found it when she picked up a fence post and immediately threw it to the ground. We take pictures then squish it so it doesn’t end up on our cart which would cause problems later on.

2:30 PM – Take a break to record a video of working on the farm and send it home to my family.

7:00 PM – Go to town (Mount Barker) for a movie with the girls and their boyfriends. It’s a small cinema and plays about eight or nine films. Due to my workload, I nod off during the film. The film finishes and I head back to get some sleep.

8:00 AM – Pick grapes. We get through one load before stopping due to too much rain. If the grapes get too much rain then the sugar content drops and the winery won’t take them.

As a result, I get to go dig a hole. One of the nearby water systems sprung a leak and caused the lawn to collapse. Grabbing a shovel, off I go to dig out the T-joint so we can put it back together.

1:30 PM – Help boss load hay onto his truck and strap the bales down.

2:30 PM – Ploughing. A “make work” job. The field/paddock needs to be ploughed so he can expand his vineyard the following year. This is fun because I go “round and round,” instead of the usual method of completing a couple of headlands (outside laps around the field) and then going back and forth over the field.

7:00 PM – Fox hunting. These nocturnal creatures are a bane to the sheep farmer, especially during lambing season. Catching a whiff of lamp chops, a fox will wait outside a paddock and pick off a new-born lamb or sick sheep. As a result, if I ever spot a fox I am to inform the boss who then grabs his gun, spot light, jumps into his ute and goes hunting. Hint: green eyes are sheep, red eyes are foxes.

Picking days are a little different from normal days and are usually given on short notice, i.e., less than 24 hours. Since we are right in the middle of the harvest season, we have to keep the machines in good order so they can be used on such short notice.

Depending on the order size from the winery, a “pick” could last a few hours to a full day. Since we are a small farm operation, there are only four or five of us to work the whole day, unlike larger operations who employ shift workers.

Picking consists of driving the grape bin along side the grape harvester. This means keeping pace with the harvester down the narrow rows of vines while maneuvering around fox holes and other obstacles.

It takes about 15 minutes to fill a bin after which I race back to the yard, sprinkle some preservative on the grapes, jump onto the forklift, remove the full bin, load a new bin, and then race back to the field to resume picking…and hope I drive down the right row so I don’t hold things up. (Which has happened a few times.)

6:00 AM – The first order is completed. We’ve worked through the night. We park the machines but my boss says he needs to call the winery in order to find out if they need more. It’s good weather and it would be a shame to miss it. He returns after a few moments and says we’ll take a few hours’ break, then get going again around 9am.

I go back to my cabin to eat and catch a nap before getting up again. Adrenaline is pumping so I don’t sleep very well.

3:00 PM – We finally finish the order and begin cleaning the tractors. During the pick, the tractor brushes up against the branches and grapes which leaves everything from twigs and sugar to fruit spiders (much bigger than red backs!) and other bugs. If we don’t clean the machines right away, the sugar from the grapes hardens and makes it even more difficult to get off later. Each tractor and cart takes about fifteen minutes to clean.

4:30 PM – I wash down the harvester and grease it. I shouldn’t be surprised by the amount of grapes that remain stuck in, on, and around the harvester but it still takes about thirty minutes to clean the whole thing. Greasing it takes another thirty minutes.

6:00 PM – I clean up and then eat quickly. I’m too tired to bother with much else. It was a long day and I want to rest up for the weekend.

9:00 AM – Help the Grandparents de-clutter an old house. The Grandfather wants to use a chain saw to cut up some old trees but my boss explicitly tells me not to give it to him. I comply with my boss’ wishes despite the insistence of the Grandfather.

They invite me over for lunch and some beers while discussing immigrating and working and travelling. It’s an interesting conversation since they immigrated to Australia after the Second World War. He hands me some extra money for my help.

12:00 PM until 11:00 PM – Freedom! I hop in the car and go to Adelaide for the Soundwave Festival. I’ve lucked out on this one as I thought I was going to miss it. One of the most recent festivals to hit Australia is this annual tour de force of heavy metal gods and goddesses. 2012 was a good year. Unfortunately, with beer prices so high I can only afford one or two beers at the event. I do pick up a shirt to commemorate the event, but that is about all.

12:00 AM – Slow drive through Adelaide to take pictures of the city at night.

Sundays are my day off from work and that means they’re spent doing the things I don’t have time to do during the week, such as laundry, shopping and catching up on emails. I also spend a bit of the day updating my journal and updating my blog.

My boss, on the other hand, raises polo horses and Sundays are game days. A slew of polo players truck their horses to the polo field and have a kick around. I went once and decided polo wasn’t a sport for me; today I really need the day away from work.

3:00 PM – Stop by the local cafe and have a coffee. Chat with the owner about working and travelling.

4:00 PM – Do some sightseeing; in this case, there isn’t very much to see as the town is quite small. There is a walking trail along the river, a plaque commemorating the town’s settlement, a description of activity in the region a hundred years ago, and a small park near the recreation centre. It takes me about an hour and a half, walking slowly, to see everything.

7:00 PM – Do some reading and trip planning. Not very successful. With prices so high in Australia, it seems better to keep working than to take much time off to travel. I begin looking for other jobs since this one is only going to last six weeks.

Steven Sirski would love to visit and/or work on the continents he hasn’t yet visited, such as South America and Africa. For more pictures of tractors or to read more about his travels, visit his website at stevensirski.com or follow him on Twitter @stevensirski.

3 thoughts on “A Week-In-The-Life of Steven Sirski: Farm Hand in Australia”