There’s a Redback in my Kitchen

When there’s a redback in your kitchen, it’s something to note. Australians and arachnophobes alike will know what I’m talking about here.

Despite learning the hard way the punch a centipede bite can pack, seeing snakes slither in Springbrook, and discovering the Australian Huntsman taking over our microwave, we have become somewhat complacent about the dangers that abound here in Australia. We have had so many Australians balk at our timid inquiries as to how to deal with being in a county rife with the world’s most dangerous creatures, that now we simply do as the Aussies do: shrug and go about our day.

And this really is the only way to cope with the tiny venomous creatures that lurk in dark corners and slither along side us. Parents adopt the mantra of “look before your reach” to their explorative kids, and when walking in tall grass you make lots of noise so the snakes can hear you coming and give you a wide berth. (As an aside, I am quite excited to see a snake here – on my terms of course. I’d like to see it from afar, admire it, and be done with it. Being surprised by one – which is more often than not how it goes – is another matter).

On with the story, Nora. There is a Redback in my kitchen that’s not going anywhere anytime soon.

In order to sleep at night, I have essentially convinced myself that the really bad spiders don’t live indoors. Or at least they don’t live indoors anywhere I happen to be. When I clean the cottages after guests leave (as I volunteer in trade for accommodation at Kingbilli), I feel no fear about reaching around corners, under furniture, and in other dark places in an attempt to get everything spic and span. One area I thankfully have missed – until now – is underneath the floor lamps.

“I think I just found a Redback,” Kelly calls out one day. I don’t pay it much heed, since he has 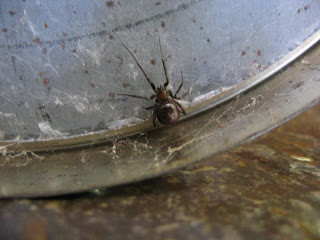 cried wolf a few times now, once almost hoping that the tiny (harmless) spider in our bathroom was a Redback, among other instances. But the waver in his voice this time is enough to pique my curiosity. Ginny saunters over calmly to investigate, and confirms Kelly’s observation.

“Yes, that’s a Redback spider. A very pregnant one at that,” she says, observing the eggs that have already been laid in the spider’s lair under the lamp. “This is the perfect place for one; it’s dark and cool and secluded,” she says, as I make a mental note of how many floor lamps and other similar dark cool places exist in our own cottage.

Redback spiders are the cousin to the Black Widow, and as such are the second deadliest spider in the world (next to the Sydney Funnelweb spider – thankfully indigenous to Sydney and not Melbourne). Despite its horribly venemous bite, I know a guy who has endured two bites, and has lived to tell the story, with little more than a few hellish weeks of illness to show for it. But children, the elderly, and unhealthy should beware of the Redback.

The good news is that Redbacks are very docile creatures; unlike other spiders, they won’t jump, and won’t come after you. They will bite only if coerced into doing so, for example if you pick one up or really get in its way.

We took care of that Redback swiftly, and closed the chapter our lives that saw us as oblivious to these poisonous creatures. Now we were on the hunt.

And our search was rewarded – while cleaning the other cottage, underneath a floor lamp no less, was Redback number two. But this time Kelly – ever the little boy – decided to keep it as a pet.

This is why there is a Redback in my kitchen, in a plastic container, being fed ants and flies by the maternal Kelly himself. His lifespan is probably not going to be too long (the spider’s that is) given that plastic containers are probably not its ideal habitat, and I hope to let it go soon.

It gives me the creeps just thinking about our new house-pet. I dread going into the kitchen half expecting to discover that the (covered) Tupperware container is eerily empty…cue in the horror movie music.

Which is why I simply don’t go into the kitchen any more. It’s actually a great diet regime – what a way to cut down on snacking. Take this to extremes, and I have visions of my emaciated self withering away in the living room, while Kelly dotes on an ever-growing Redback spider. I wonder who will last longer…the Redback…or me.

And if you’re not shuddering yet, check out this video showing our discovery of the lovely Redback.

NOTE: Upon further research, we are not so sure that this is a Redback, and not a near relative to the Redback (like the Brown Widow). We are told that adolescent Redbacks lack the distinctive red stripe, but we’re not so sure any more. Does anybody have any feedback given what you’ve seen?

9 thoughts on “There’s a Redback in my Kitchen”