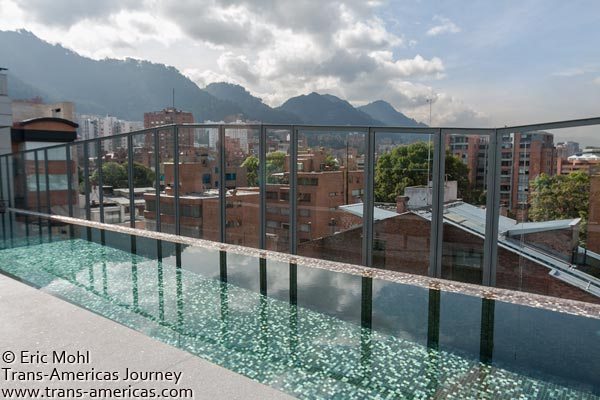 In April of 2006 journalist Karen Catchpole and photographer Eric Mohl quit their jobs, packed up their apartment in New York City and climbed into a pickup truck to embark on the Trans-Americas Journey; their ongoing 200,000+ mile working road trip through North, Central, and South America. They’ve been on the road ever since. Please enjoy this Week-in-the-Life which follows them from Bogota, Colombia down south over the border into Ecuador including craft beer, the smallest hotel room in Latin America, an unexpectedly epic drive, a completely surreal cathedral and the kind of surprise you don’t want to get when crossing a border.

Warning! If you’re expecting a happy-go-lucky, care-free romp through the sexy life of a couple of footloose, full-time travelers, stop reading right now. Ours Trans-Americas Journey is a working road trip and we freelance from the road as we go. This means a “normal” week for us involves 60+ hours in front of the computers writing, editing photos, and pitching stories, plus more hours spent planning upcoming travel. And then there’s the time it takes to actually execute a road trip in order to have the experiences we came here to have and to the reporting we came here to report. It’s like having two full-time jobs while being constantly on the move. We’re not complaining (we worked hard to create this life, after all). We’re just saying.

The B.O.G., craft beer, and bogus buses in Bogota, Colombia

We arrived in Bogota and checked into the B.O.G. Hotel which we were reviewing. Our truck, the third Trans-Americas Journey team mate, is too large for most garages and parking lots in Latin America so after checking in Eric drove around the city in the dark with the hotel’s valet until they found a parking spot big enough for us to park in.

Over the next two days we met with the hotel’s management, ate and drank at one of the Bogota Beer Company brew pubs with the company’s marketing manager to get some reporting done for a story we’re doing about craft beer in Colombia, and spent each night getting lost on the city’s infamously frustrating and overcrowded Transmillenial bus system as we moved around shooting Bogota’s elaborate Christmas light displays.

After shooting we returned to the hotel to work on assignments for our freelance outlets (including the completion of a luxury travel guide to Belize for Indagare.com which kept Karen glued to her computer for the better part of two days), pitch new stories to editors, write and publish posts on our travel blog, edit photos, and plan upcoming travel. We were so busy it was time to check out before we had a chance to get into the hotel’s excellent rooftop pool.

We checked out of the B.O.G and headed out of Bogota, which is easier said than done given the city’s notorious traffic. Even with relatively light traffic it took us nearly two hours to clear the city limits. Then we drove south to Neiva where we spent an hour driving around the streets of this uninspiring town trying to find a parking lot for the truck and a decent budget hotel for us.

We eventually found a nice lot for the truck and the tiniest room of the entire Trans-Americas Journey for us. We could just about touch the opposing walls if we extended our arms. We regularly go from boutique hotels to budget cheapies but going from the B.O.G in Bogota to our shoe box in Neiva was extreme even for us. We tried to adjust to our new, cramped reality as we worked elbow-to-elbow with our computers on our laps on the Barbie-sized bed until the wee hours.

The best thing we can say about Neiva is that it was the most southerly geographic point we’d been to on our Trans-Americas Journey at that point.

TIP: For anyone traveling along this stretch, learn from our mistake and skip Neiva altogether. Instead, stay in the town of Villaviejo, just north of Neiva. It’s much more pleasant and you’ll be near the entrance to the Tatocoa Desert, which is actually a tropical dry forest and home to some of the most unique landscapes in Colombia.

An unexpectedly epic drive from Neiva to Popayán

We pried ourselves out of our sardine can of a room in Neiva and hit the road to Popayán via what turned out to be an extremely scenic but extremely rough dirt road which climbed up to around 12,000 feet before plunging way back down again. One minute we were in lush, humid rainforest cranking the A/C, the next we were in arid, windy, high-altitude paramo with our seat heaters on.

By the time we reached Popayán (which did not live up to the hype about its “Colonial charm” – then again, maybe we’re just spoiled by places like Antigua, Guatemala and Granada, Nicaragua) our truck was wearing the trip like a beige blanket.

We quickly found a lovely affordable hotel (we can highly recommend Hotel Colonial) and a lovely lot for our truck and settled in for our usual night of writing, pitching, posting, photo editing, and planning.

We knew we were getting close to Ecuador because during the drive south from Popayán we saw our first roadside restaurants offering cuy (guinea pig).

We’d been looking forward to checking out the Las Lajas Sanctuary near the town of Ipiales since we saw a picture of it months ago. The sanctuary marks the spot where an apparition of the Virgin Mary was seen, but that’s not the amazing part. What started out as a humble handmade, thatch-roof shrine is now an elaborate Gothic Revival stone wonder that’s 330 feet tall and spans a deep gorge thanks to a 160-foot stone bridge that was built as part of the structure. We’ve seen hundreds of churches during our Trans-Americas Journey but none like this.

After a visit to the cathedral we checked into Casas Pastoral, a sprawling pilgrim’s hostel that used to be run by nuns and still has a palpably pious feeling to it. This was the cheapest hotel room of the Trans-Americas Journey to date at US$9 for a small, monastic private double room with a cold water bathroom, scratchy bedding, a steady draft, and a view of the sanctuary in the gorge below.

By sunset it was clear that something was wrong with both of us and by dark we were both in the throes of food poisoning. We blamed the not-quite-hot-enough soup at the roadside eatery we’d stopped at earlier in the day and began hydrating as best we could. We were too sick to turn our computers on and there’s no WiFi at Casa Pastoral anyway, so we fell into bed and passed a dreadful, sleepless night in pain on a biblically hard mattress with stomach bugs raging away.

See also: How to Stay Healthy on the Road – Natural Preventions and Cures

Though we’ve crossed nearly 50 overland borders since our Trans Americas Journey started back in 2006, border crossing days still dawn with a mixture of excitement and trepidation.

The crossing from Colombia into Ecuador just a few miles from Ipiales had been described by other travel bloggers as one of the easiest in Latin America so we headed for it with more excitement than trepidation. Things went smoothly at first and we were on track to make record time (it usually takes us about 1.5 hours to get our visas and the temporary importation paperwork our truck needs when we cross borders).

Then we hit a wee snag.

Like most countries, Ecuador requires that all drivers carry in-country liability insurance. It’s called SOAT and it’s cheap and easy to get – except when the border you’re at runs out of SOAT forms. Border officials told us to drive into Tulcan a few miles away and buy SOAT there but it was Saturday and no one was selling SOAT. After wasting more than an hour driving fruitlessly around Tulcan we headed back to the border where we got caught in a traffic jam that turned the only road to the border into a miles-long parking lot.

Karen took the wheel (a real rarity) while Eric walked back to the border to try and sort things out so that we could proceed into the country without SOAT. More than an hour later Karen finally rolled back into the border parking lot. Another hour passed before border officials gave us the all clear to drive on and buy our SOAT later. The border crossing that had looked so promising at first ended up taking more than five hours (by far our longest border crossing to date).

This meant we would be arriving in Quito in the dark. No problem, we thought. We’ve got a Garmin GPS which will guide us to the vacation rental we’d set up in the historic center of the city. The second unpleasant surprise of the day came when we fired up the Garmin and discovered that Garmin’s South America pack of map data does not include Ecuador. We were flying blind. In a city known for confusing traffic patterns. At night. Good times.

Nearly six hours later, exhausted, frustrated and essentially lost, we entered metropolitan Quito. After another hour of driving around we found the historic center and eventually, the apartment we were staying in. Thank God Eric was born with a GPS in his head.

Of course, the truck still had to be parked which required another two hours of driving around the maze like streets of central Quito in the dark searching for a suitable lot, a task we would not have accomplished at all if an attendant at a full lot hadn’t taken pity on Eric and jumped into the truck to direct him to a lot we could park in. It was 1:00 am before we finally went to bed for our first night in Ecuador.

Tally for the Week

Hours spent in front of our computers researching and working: 70

Karen and Eric are currently in Ecuador where they’re spending their days learning more about roses than they ever thought to ask, watching the Tungurahua volcano erupt (again), riding one of the newest tourist trains in Latin America, and learning to love cuy (sort of). Their nights are spent in front of their computers. Their Trans-Americas Journey working road trip will continue south, slowly, all the way to Tierra del Fuego. Follow along on their travel blog and on Facebook and Twitter.