Getting Into (and Out Of) Travel Writing and Full-Time Travel, With Leif Pettersen 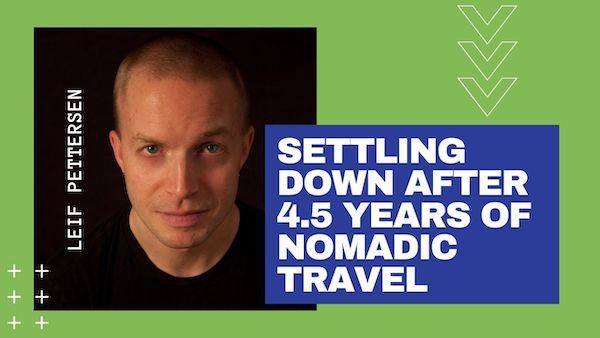 I met Leif Pettersen at a travel blogging conference in the relative infancy of such conferences. We were both early adopters of full-time travel and travel writing in that sphere, and as such it served us both very well. But things shifted, and Leif eventually returned home and got out of travel writing.

In this interview, we discuss being ahead of our time (he also filmed a travel tv show that flopped but 10 years later would have been a sensation), his nomadic travel writing career, how the industry shifted (taking him out with it), what it’s like to return home after years on the road, and more.

Other Interviews You’ll Surely Dig:
How to Create a Location Independent Lifestyle, with Jason Moore
21 Years of Full-Time Travel, with Wandering Earl of Remote Club
Getting out of Blogging and into Podcasting, with Gary Arndt

Leif Pettersen is a freelance writer, author, humorist, world traveler and award-winning travel & tourism marketing professional from Minneapolis, Minn. He has traveled through 57 countries and lived in Spain, Romania and Italy. His latest book, The First (Failed) Travel Food Show, is available on Amazon along with Throwing Up: Notes From 35 Years of Juggling, and his travel memoir Backpacking With Dracula. And you can find his various musings on the site Killing Batteries.

Pettersen was a silver medalist at the 2014 International Jugglers’ Association championships, loves chocolate, hates pickles, types with exactly four fingers, and can escape from a straitjacket. He has not vomited since 1993, making him a consummate travel journalist and excellent party guest.

This is the introduction I read out at the start of our video interview, and the conversation continued to cover an equally eclectic variety of topics. Below are a few.

Click here to watch our lively discussion, or watch below. Please leave a comment and give it a thumbs up if you enjoy it – this is imperative in giving my series exposure to other people on YouTube who would be interested. Thank you!

I’ve had a chance to film a few different travel tv shows in my years on the road, and had a variety of memorable experiences in so doing. So too, has Leif. We chat about:

Developing a Career as a Travel Writer and Travel Blogger

Why He Quit Travel Writing

While being an early adopter in the travel writing and travel blogging game served Leif Pettersen well in that it was easier to get noticed “back in the day”, it was also a factor in why he ended up quitting. We talk about:

What it’s Like to Return Home After Traveling Full-Time

Leif did it. I did it. Other people I’ve interviewed for this series did it, like Sherry Ott and Gary Arndt. At some point, most full-time travelers set up a home base, some in their home towns. Here’s what it was like for Leif:

When I ask people what their biggest obstacles are to traveling long-term, a common reply is that they are afraid they’ll quit a good job and never be able to get a comparable job again when they return home. This is not an unfounded worry! Whether – or when – to take the leap depends on your skill set and finances. Leif and I talk about:

Lastly, we talk about how our respective travel blogs are like personal time capsules, even if the early writing is a bit cringe-worthy.

Also, just in case you tried to Google Leif as I did, I assure you Leif Pettersen – at least the one I interviewed – is not a dead football player. Just saying.

1 thought on “Getting Into (and Out Of) Travel Writing and Full-Time Travel, With Leif Pettersen”