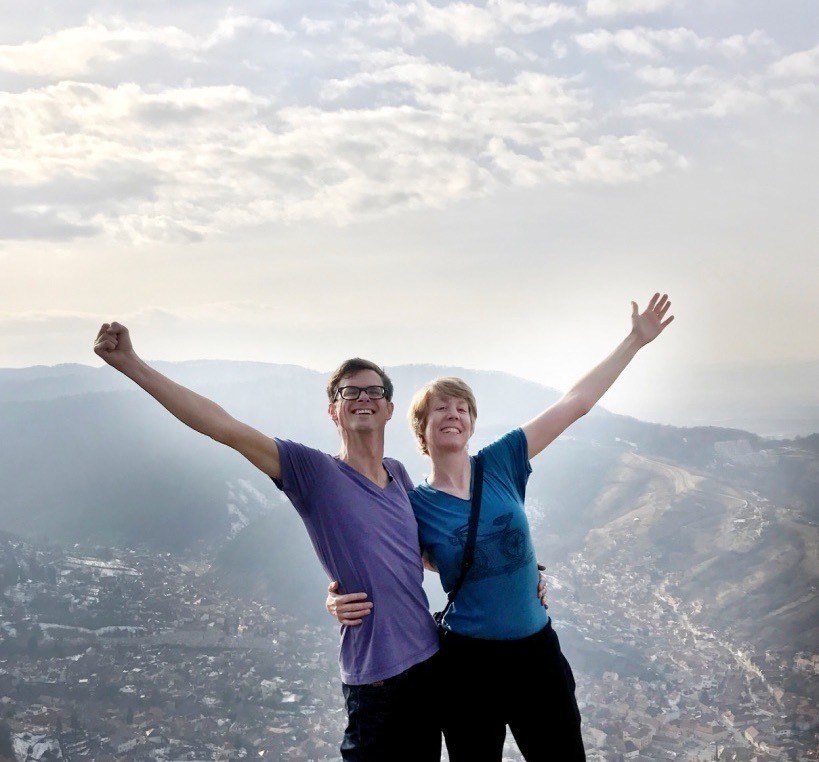 Jane and Stephen have been travelling the world together for 20 years and have been full-time nomads since 2013. In 2013 and 2014 they bicycled 16,000 km in Europe and Asia. They finally said goodbye to their bikes but just couldn’t stop travelling! This year they visited their 50th country. Together, they run the mindful travel blog My Five Acres and are Adventure Yoga instructor around the world.

I’ve often wondered if it’s possible to make a living as a yoga instructor while traveling around the world….apparently it is! (Although they do supplement their income with freelancing and blogging). Read on for details.

How long have you been living/working on the road, and where have you traveled to?

We have been full-time travellers for four years but we left our home country of Canada in 1997 and haven’t lived there since. We were expats in London for nine years and Los Angeles for seven years. During that time we travelled all over the place and this year we visited our 50th country.

Our favourites include Finland, Cambodia, and Laos. We had our biggest growth experiences in Syria (before the war) and China. The most beautiful country we’ve been to is still Canada.

Like most nomads, we have a few different income sources to help make ends meet. These days our primary income comes from Stephen’s yoga instructor activities. I pick up various freelance writing and design jobs, which includes anything from travel articles, to brochures, to corporate training courses.

This year we’ve finally gotten serious about earning income from our blog. Affiliate links to Amazon and hotel booking sites have been the most lucrative – though our totals are tiny so far! Our goal is to make our blog our primary source of income before the end of the year.

It really depends on the week. If we’re settled in a single place, we work between 40 and 60 hours a week. If we’re travelling, that number drops significantly. When we’re on the move, we work shooting photos and videos but spend far less time behind the computer.

As a yoga instructor, Stephen leads yoga workshops about 25 weekends of the year so when there’s a workshop on, most of his time during that week is taken up with the admin, prep work, and actual teaching.

Our first two years on the road, 2013 and 2014, our income was almost nothing. We earned a few thousand dollars from teaching yoga in cities along our cycling route. We paid for that trip by selling our cars and all of our stuff before we left home.

We hadn’t yet realized that we wanted to travel permanently, so instead of treating our blog as a business, we used it to tell daily stories from our life on the road. Though it has made our growth slower, I don’t regret the way we did things.

Writing a post every day (yes, every day!) for 19 months helped us really focus on the important stories each day and make each day significant and distinct from the last. Re-reading those posts now is so much fun – I love to be able to immerse myself back in that cycle touring life.

In 2017, we expect to make a little more as yoga instructors and a little less from freelancing.

The drop in freelance income is because I decided not to take on new clients so I could focus on My Five Acres.

We didn’t even start tracking blog income until a few months ago but I estimate we’ve made a few thousand dollars during the last three years. This year was our first year working with brands – we’ve received about 10 complimentary tours, products, and hotel stays in exchange for blog posts and promotion.

To anyone back home, our income probably looks impossibly low. But, we have actually broken even the last two years and expect to do so again this year. We are really great at budget travel and get a lot of free accommodation from friends, housesitting, and yoga contacts.

I get pretty nervous about our finances every once in a while. I really want to be adding to our retirement savings and would also love to be able to afford more expensive destinations, like Japan and Borneo.

How do you manage the logistics of teaching yoga around the world?

During our bike trip, Stephen searched online for yoga studios on our route. When he found one that seemed like a good fit for his style of teaching, he’d email to ask if they’d like him to come teach.

The story of our bike trip was a great hook and many studios said “yes” just because of that. He usually taught donation-based classes, where students could pay any amount they wished. That way, the studio didn’t have any financial burden to shoulder if nobody showed up.

For yoga teachers who want to earn a little extra income during their travels but don’t need it to pay for everything, this is a great technique.

When our bike trip ended, Stephen had already connected with some of the studios he taught at along the way to set up weekend workshops. Now that he’s been travelling to teach for a few years, it’s much easier to book jobs. His schedule is pretty much full for the next year.

He’s also continued his training while we’ve been on the road, travelling to Los Angeles to do a 300-hour yoga instructor training course and then doing another level of training online with his LA teacher last year. I can’t emphasize enough how important it is for travelling yoga instructors to have great teaching skills. You usually only get one class to make an impression so you’ve got to be great!

What do you like most about your career and lifestyle?

When we live in one spot, I get so bored seeing the same places and the same faces every day, repeating the same tasks over and over. Now, every day there is something new to learn, a new challenge to overcome, or new people to meet.

These challenges come up both in travel and in work. At this point, I’m an expert at crafting blog posts, but I continue to learn and improve my skills in SEO, marketing, PR, affiliate sales and all the other things that go along with running a successful travel blog. (See also: Want to Make Money Travel Blogging? Start Here)

Stephen loves the chance to build a connected community of like-minded yogis around the world!

What are some of the challenges you have with this career and lifestyle?

Avoiding travel burnout is a constant challenge. We spent January through May this year in Europe. Those are some of Stephen’s busiest months so he was travelling to a new country almost every weekend. I didn’t want to keep up with that pace, so I travelled solo to Romania, Serbia, and Bosnia – with Stephen joining me when he could.

By the end of those five months, we were both sick of travel and feeling like we needed a home, at least for a little while. Luckily, we recognized the symptoms of travel burnout and we knew how to fix it.

For the next few months, we are moving slowly. This month, we are in a village in Vietnam volunteering for Rock-Paper-Scissors Children’s Fund, a charity we’ve supported for a few years. Then, Stephen is teaching yoga for two weeks on Lombok, Indonesia, then two weeks in Yogyakarta, Indonesia. After that, we’ll be in Mui Ne, a Vietnamese beach resort, teaching yoga daily for a month.

Slowing down and sleeping in the same bed for a few weeks is really restorative and absolutely necessary when you travel full-time.

Our plan is to keep up the balance of work travel, fun travel, and adventure travel for the next few years. I want to do another big adventure soon! We are considering biking and kayaking across Canada next summer.

I don’t think we can keep this up forever. Right now, our plan is to go until we don’t like it anymore. Then we’ll do something else. Of course, finances are a huge part of that. If our income doesn’t start growing, I might have to settle down somewhere and get a “real” job. That would be the ultimate disaster!

In the future, I think we both have a vague idea that we will settle somewhere and open a yoga retreat where the students can come to us.

Any advice for the aspiring traveler about living and working on the road and managing finances?

For every glamorous story of someone striking it rich on the road, there are hundreds of stories of people running out of money and heading back to their old job and lifestyle. Be prepared to struggle, work your ass off, and live on a budget, especially in your first few years.

But that doesn’t mean you should stay home! If you can’t stop dreaming of a nomadic life, get rid of your debt, sell your home and all your junk and go!

We are still figuring out the finances of a sustainable travel lifestyle but it’s the happiest, most fulfilling four years we’ve ever had.

Don’t be fooled by all the luxury travel Instagram accounts out there. You don’t need a huge amount of money to travel well.

Travelling on a budget, staying in hostels and cheap hotels, eating at local’s restaurants, and riding public transport is far more rewarding than jetting into a 5-star hotel, lounging by an infinity pool, and being waited on hand and foot.